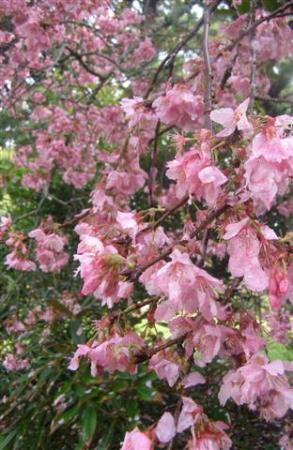 • Spring has certainly made her presence felt this week and our tui have returned to the flowering cherries, including one distinctive golden brown tui in its third season here. It is the campanulata or Taiwanese cherries in flower at this time which attract the native nectar feeders. Try and buy sterile, named forms if you are planting them because some can seed too freely.

• With the warmer weather, there will be an explosion of germinating weed seeds so be vigilant and try and eradicate this crop before they get established and seed further. Spreading a thick enough layer of mulch will suppress weeds as well as retain moisture levels for when drier weather sets in but lay your mulch after you have done a weeding round, not on top of existing weeds.

• Slugs and snails are also getting more active. If you are looking for alternatives to poisonous baits, you can try baker’s bran in reasonably thick circles or mounds (irresistible to the slimy critters who then get picked off by the birds). Alternatively, ring plants in sand, grit or masses of crushed egg shell – it is not bullet proof but it helps discourage them. Or make traps from the time-honoured hollowed out orange skin or half empty cans of beer – but you do have to go round and squash them after you have encouraged them to congregate. Getting out with a torch at night, especially after rain, can show up quite a number of them too.

• Spare a thought for permanent container plants. They need their potting mix replaced every two years and they need feeding at least once a year in spring. You may need to hose all the old mix off the roots and trim the roots to fit back into the same pot. It is less stressful to the plant to do it now rather than when it starts to look very sad in summer.

• I read a hint in a gardening magazine to trample down green crops before you dig them in to the vegetable garden. The crushing process hastens the breakdown. It seems to make good sense. Get onto digging in any green crops without delay.

• If you still plan to plant fruit trees this season, get right onto it now. The sooner they go in, the better chance they have of getting established. The same applies to all trees and shrubs for the ornamental garden.

• And a bouquet this week to Todd Energy who have started the process to put in screening plantings to block their Mangahewa-C well site from public view. Living as we do in green countryside peppered with ugly, albeit small, industrial sites, we applaud this new move and hope that other energy companies will follow the lead. These sites can be rendered almost invisible to ground level view by simple plantings but it has taken a long time before one company has decided that this is an appropriate priority. By planting the right species, they can contribute to the environment as well.