An attention grabber! The Pink Pantser in the RHS Wisley glasshouse.

We like to end up our UK garden trips at Wisley, the flagship garden of the Royal Horticulture Society about an hours south from London. It gives a context to what we have seen and it is interesting to look at the evolution of some of the recent plantings and reflect on styles and designers over time. The twin Piet Oudolf borders are a personal favourite. And they are certainly standing the test of time with considerably lower input than the classic double herbaceous borders. They were not without controversy when first planted in 2000. I still recall talking to an English visitor in our garden here. I commented that we were heading over to the UK to look at contemporary planting directions and he replied disdainfully, asking if we would be planting in a herringbone design as they had at Wisley.

The Piet Oudolf borders are not in fact a herringbone design and when we got to see them, they were a delight – soft rivers of colour. Those rivers give a sense of form to a garden which has no hard landscaping. In case you are interested in the background to these borders, I quote the instigator of this planting. “I started talking to Piet about these borders in 1997 with plans agreed in 98/99 with planting using 17000 9cm plug plants in Jan.2000.The only significant change to Piet’s maintenance regime was to mulch the entire borders with 6mm quarried gravel in c.2004 to a depth of c.60mm.This was `topped  up` in 2009.”

There is considerable restraint and knowledge in the selection of plants. It is a lot more than just picking for flower colour. Obviously, compatibility in growth habits is an issue but so too is a high level of uniformity in height, an ability to stay upright without staking, repeat flowering without the need to deadhead and a succession of blooms and foliage interest from spring through to autumn. Allied to that, there is no place for dominating thugs in this type of planting, nor for prolific seeders. I would guess a fair proportion may be sterile (in other words, not setting viable seed) which usually prolongs flowering, eliminates seeding issues and keeps the plants true to type. When we did a count on our last visit, we estimated a proportion of about 3 perennials to each grass in these borders. Each river of colour is comprised of just a few different plants. I think it was looking at the composition of several rivers that led us to the 3:1 ratio. The borders have to work equally well viewed looking up or down the slope and also close up, so the individual combinations of plants are as important as the mass effect. For those readers trying to keep echinaceas going, over time these borders have apparently shown that E. pallida is short lived while E. purpurea is longer lived. It is multiple visits that help us to understand better how these plantings are put together and managed. You can never take it all in on just one visit.

Detail of one river in the Oudolf borders

Three years on, the dominant plant at this time of the year is the eye catching Berkheya purpurea, which Mark covets for our garden. It is a thistle. The maintenance regime on this meadow is clearly more hands-off than the Oudolf borders. It will be interesting to see it again a few years’ time. With agapanthus, kniphofia, crocosmia, nerines, geraniums, eucomis, osteospermum, gazanias and more, there is quite a mix in there including a few that would be thugs in our climate. We love these meadow plantings and find the range of meadows illuminating but our London friends (one a keen home gardener) could not relate to the whole idea of a South African meadow in this context. So that was an interesting response.

These friends had recently been to Great Dixter and expressed surprise at Christopher Lloyd’s dramatic ‘subtropical’ garden being taken out and seeing conifers going back in instead. It became a little clearer when we came across the Wisley project along similar lines. The conifers are being used as a framework for subtropical plantings. This is not a combination that would ever occur to a New Zealander but we will reserve all judgement until we see the finished product. Sometimes it is good to be surprised. Conifers are long overdue a revival and who knows? Maybe a new combination will launch a new fashion. Or maybe not. 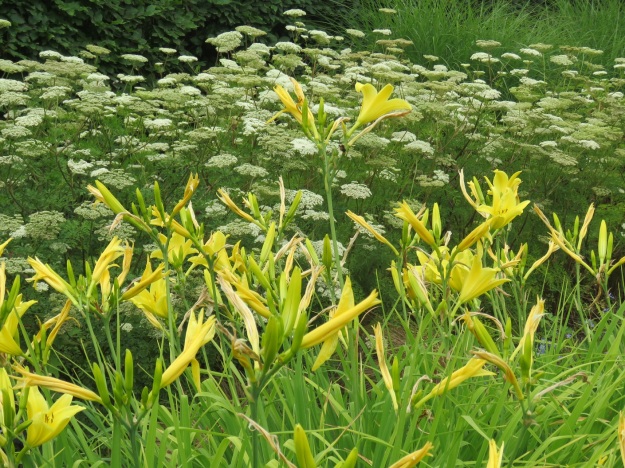 Tom Stuart-Smith plantings were a delight

There is so much more to Wisley. The Tom Stuart-Smith plantings in front of the glasshouse really appealed to us this visit. They had seemed a little ‘blocky’ and amenity in style when young. Now the combinations and the relaxed style of mature plantings is a highlight. The trial grounds included both echinaceas and nepetas as well as coloured lettuces. The national collection of rhubarb never fails to amuse – though more the concept of it than the reality, I admit. I have posted an accompanying album of more photos to Facebook again. It starts with the succulent cake and ends with the Famous Five and the issue of whether George was a boy or a girl.

5 thoughts on “A day at Wisley”