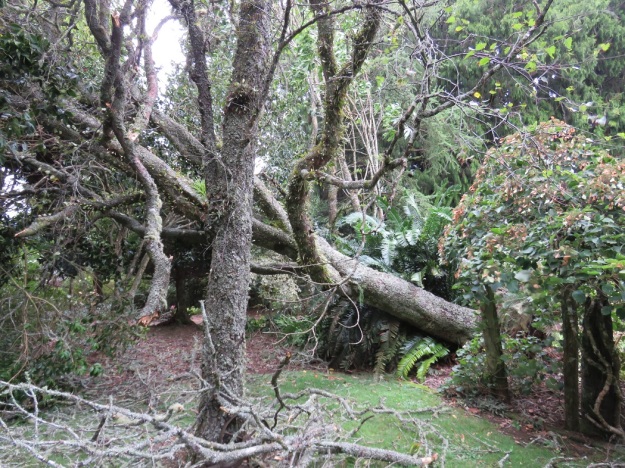 Alas poor schima, we knew you well. In early spring you would drop all your leaves in one big whoosh (and there were A LOT of leaves because you were a large tree) and startle us for a few weeks with remarkable lime green fresh growth. You were a way finder for garden visitors. We could point you out – “see the lime green tree – you will find the sunken garden in front of that”. In early summer you covered yourself with small white blooms but no more. True, we had noticed that you were not looking too healthy on one side but now you are gone. Awkwardly – getting you down is a challenge because you are resting against other standing trees but our gratitude that you fell the way you did is great. Had you fallen the other way, you would have brought down the power lines to our house and that would have been A Major Repair. 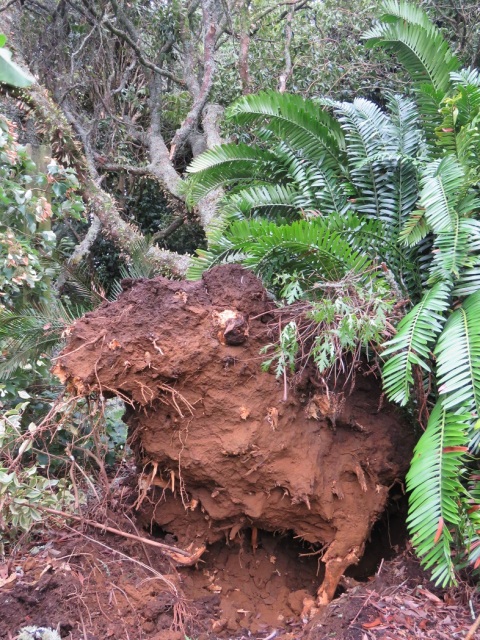 A root ball close to 2 metres across

The catalyst for the fall was ex-Cyclone Gita – the ex is because it was no longer of the same force that hit the Pacific, particularly Tonga. Pity poor Tonga. It must have been simply terrifying and the damage to that island is vast. Cyclones usually peter out before they reach New Zealand but this one kept barrelling on, though losing its intensity. It was still fierce enough, as bad as we have known when it comes to wind here. We are grateful that the damage is just the one big tree and a bit of smaller stuff down. And grateful that our electricity is back on after a 19 hour power cut, unlike about 5000 homes still waiting to be reconnected after two nights and more than a day without power. We are even more grateful that we have our own deep water bore as half the district on town supply has now run out of water – their taps are the merest trickle or totally dry and water tankers are trucking in supplies. It is harder to manage without running water than electricity. That is one thing I learned. It is a sobering reminder of how dependent most of us are on infrastructure which is not always as robust as we might think.

At least Mark has a spare Schima wallichii ssp noronhae that he can plant out. The fallen specimen was coming up to 60 years old and that root ball is close to 2 metres across. It will leave a big hole to be filled.