On a windy day, the kites were more interesting than the garden

I had never been to the Michael Joseph Savage memorial on Bastion Point in Auckland before but after the somewhat disappointing visit to Auckland Botanic Gardens on Saturday, I wandered down the windy hill from where I was staying and I was somewhat surprised that it had escaped my notice. It was pretty clear that many (many, many) tourists have experienced what had bypassed me as there is a constant flow of tourist buses stopping there.

But let us leave the distinctive obelisk and mausoleum honouring the memory of this country’s first Labour Prime Minister and founder of the welfare state to one side. And also, let us leave aside the chequered history of that particular headland commonly referred to as Bastion Point but also known as Takaparawhau or Whenua Rangatira, while acknowledging the high impact of the recent history that still resonates long and loud for many of us and none more so than the Ngati Whatua community who are the closest residents.

Plenty of room for improvement

Let us talk about the garden. It has an amazing setting, pretty sheltered on the leeward side, astounding views, a rich history, huge significance historically and some pretty interesting aged design features. So why oh why is the garden the most unimaginative, dull, cliched affair possible, dominated by the Victorian bedding plant genre now meeting utility, amenity planting of the dreariest style? What a missed opportunity. Has nobody gone to Council and advocated for a breath of fresh energy and more innovation at a place that is a prime tourist site? 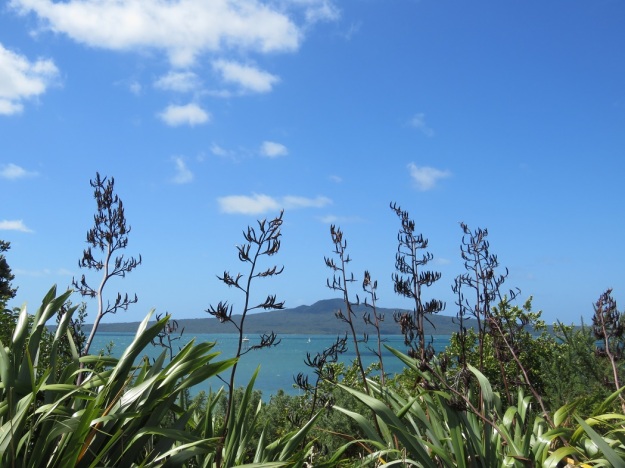 The view  – unconnected to the monument and the gardens 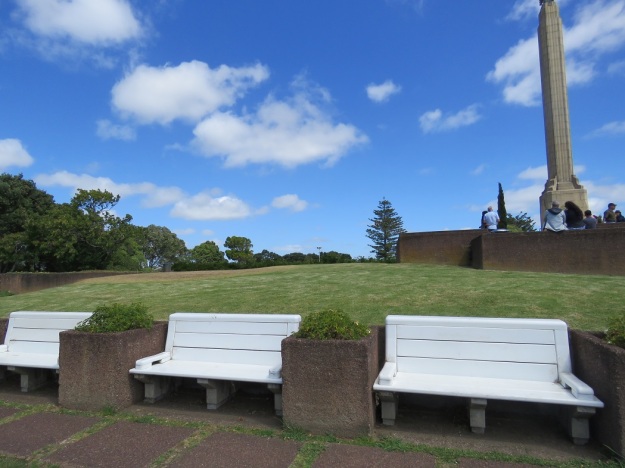 On the seaward side of the monument, there is a breath-taking view. Do garish white painted seats and mingy, narrow borders of a white carpet rose do anything to enhance this area? Well, no, they don’t. And I state that as a fact, not an opinion. I get the formal garden concept for the whole area but surely it could be done more creatively? I would want to use native plants at the front to blend out to the wilder areas at the perimeter and then out to wider seascape. Maybe something like clipped Muehlenbeckia astonii  could be used as a formal planting, as shown at its best at Auckland Botanic Gardens.

Muehlenbeckia astonii clipped to give formality

Along with painting the seats a muted shade – anything but stark white or garish bright green. Though, if the front was colour themed to red, black and white to recognise the colours of the Tino rangatiratanga flag and the red of the Labour Party, the white seats might remain.

Pretty much a blank slate of austere but unimaginative plantings

On the leeward side, there is a large protected basin with loads of aged concrete construction and a formal pool. They are pretty good bones to start with but standard Iceberg roses and stripes of different bedding plants that are little more than ankle height? I assume it is buxus hedging but I can’t guarantee that because I was so unutterably bored by the plantings that I did not look closely. I am pretty sure I also spotted lavender past its best and cosmos that was over and dead.

A blank slate, begging for a more ambitious planting

Given the setting and the formal structure, I just wanted to see a very capable designer with good plant knowledge sweep in, gut the plantings and go with something stunning. I have seen really high-quality public planting overseas, particularly in the UK – sustainable, ecologically sound, transitioning through the seasons, hardy but above all, vibrant, inspiring and immersive for the visitor.  Some of the contemporary European and American trends of dry prairie planting, New Perennials or even Pictorial Meadows would transform this area. Keep the old structure but work within it with some contemporary energy and style.

This is the current planting,. Need I say more?

I can not think that either Michael Joseph Savage (1930s era) or Ngati Whatua would ever relate to the oppressive and dated Victorian bedding plant genre. This place could be so much more if somebody, anybody, had some imagination and knowledge. It is not exactly low maintenance now so I don’t accept that as an excuse for the status quo. I suspect that nobody has taken a cold, hard look at it for many a year, let alone considered alternative styles that would honour the history, the location and the existing structure while dragging it into modern times with inspired plantings.

How about some more contemporary, generous, immersive plantings like this Oudolf sweep at Scampston in Yorkshire?

More Oudolf at Pensthorpe in Norfolk

5 thoughts on “Room for improvement at a major tourist site”