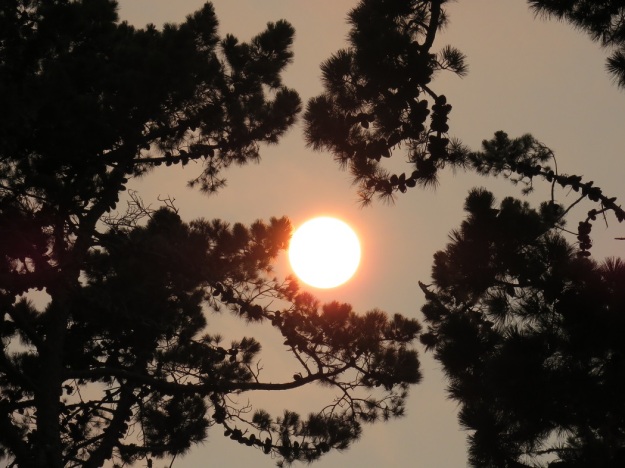 Midsummer sunrise in Tikorangi on January 2, seen through smoke and ash drift from Australia’s fires

It was probably the smoke and ash clouds floating over New Zealand that shook this country the most. Until then, the bush fires of Australia were at a safe distance. We felt immune to it on our islands isolated by 2000 km of ocean. It was all happening ‘over there’. But on New Year’s Day, the air was so bad in Dunedin that people needed headlights on to drive all day and most stayed indoors with the lights on. In mid summer. In Taranaki, we are the closest land to the east coast of Australia but wind currents meant that all we had was a peculiarly diffuse red sun, lowered light levels and sometimes a whiff of burning. What must it be like in the burning country, we all wondered. 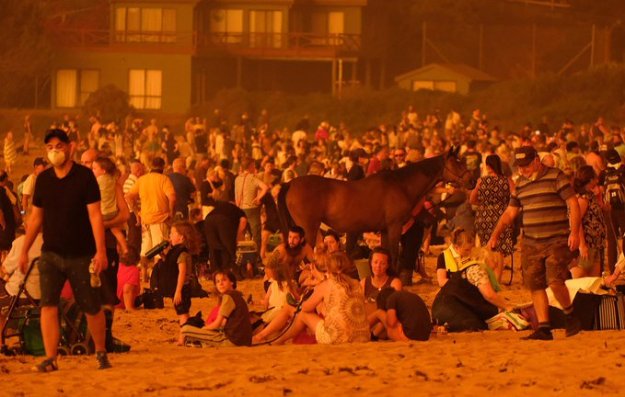 I do not know whose image this is but it came through Bill McKibben on Twitter (@billmckibben) with the caption: These are Australians waiting on the beach to flee into the ocean if the fire keeps coming. It’s the only ‘safe’ place they can find.

The view of Parliament Buildings in Canberra two days ago.

Our children all live inner city so are pretty safe from actual fires. Outer suburbs are not guaranteed. But our only grandchild lives in Canberra – a city that has consistently topped the poll in the past week as having the worst air quality of any city in the world. The air is so bad that it is deemed extremely hazardous and our grandson can’t go outdoors. Our Canberra daughter is struggling with the horrors she sees. She commented a month ago that her garden is now full of birds that she never normally sees because they are countryside birds, not urban ones. This was interesting, she said, but hugely sad because they have flown into the city in search of food because they are starving in the long running drought. She has set up feeding stations and water for desperate birds. This week, with the continued deterioration of air quality, Australian National University, where she works, closed along with some of the commercial city centre. She rang on Thursday and said she was going to do a doomsday prep shop the next day because the chances of Canberra being totally cut off by fire were fairly high. In her practical, down to earth way, she said that for the first time, she and her partner have prepared a list of what to grab just in case they have to be evacuated.

Countless others are in conditions that are so much worse and there is no end in sight. The spring rains never came. There is no guarantee that the autumn rains will arrive and the fires will likely remain uncontrollable until the advent of rain. The hot part of summer is yet to come and already that country is registering temperatures in the 40sC (well over 100F) across the entire continent. My heart goes out to any and all readers currently in Australia. 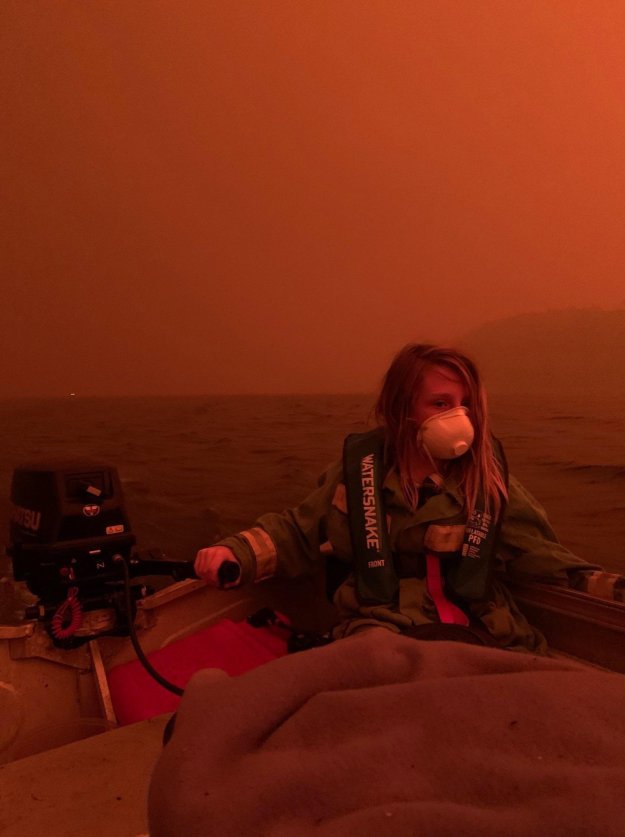 The iconic photo of 11 year old Finn Burns, taken and shared by his mother, as the family took refuge on the water at Mallacoota Beach.

Australia is not so much the canary in the coalmine when it comes to climate change, although the coal metaphor is accurate.

It is the blazing, burning continent for the rest of the world to see.

It won’t be fire and drought that is the manifestation of climate change for many countries. The Pacific Islands have been begging the world to notice that they are being swamped by rising sea levels. In New Zealand, it is more likely to be torrential rainfall, rising sea levels and what we quaintly call ‘extreme weather events’. Already some coastal settlements are under threat. Europe appears to be on track for both extreme heat waves and flooding.

To climate change deniers (who, I notice, like to call themselves ‘sceptics’ or to claim they have ‘an open mind’) I say: what if you are wrong? What if, in your determined efforts to stonewall or undermine any environmental improvements because you don’t believe in climate change and don’t want to change your comfortable status quo, you are wrong? What if the apocalyptic scenes coming out of Australia are not an isolated, though appalling, situation but rather an indicator of what is coming to the world?

Postscript: If you clicked on the coal link above, the red-face, self-satisfied bloke to the left of the Prime Minister is one Barnaby Joyce, some time deputy prime minister. Mr Joyce distinguished himself yet again late last year by claiming that the first bushfire fatalities were most likely to be Green voters.

Post postscript: We had a family Christmas in Vincentia five years ago. Vincentia is still there although included in the mass evacuation of the south eastern coastline because of uncontrolled fires. 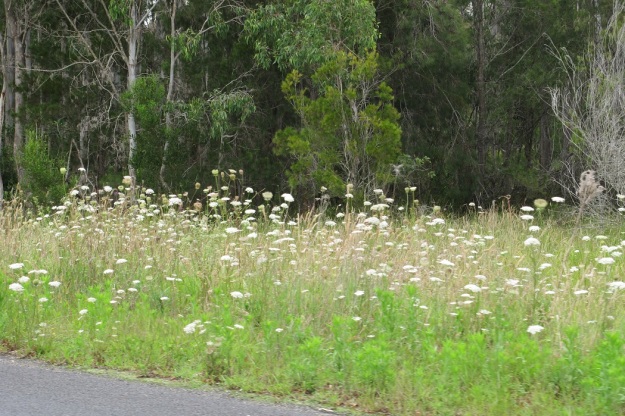 These roadsides have all burned. 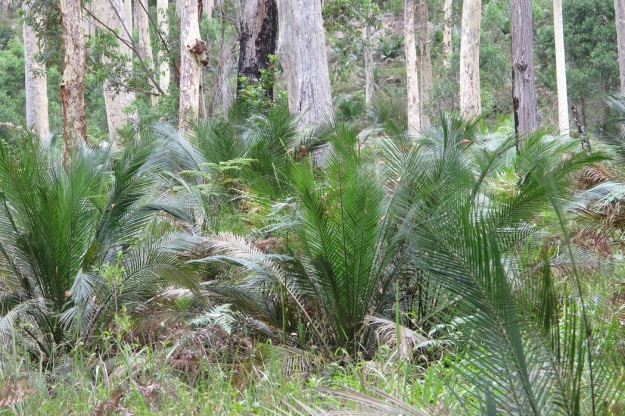 The road through this forest of Macrozamia communis has been closed for some time because of fires. It is likely this is now all burned. The vegetation should recover if the rains arrive. Much of the Australian bush has evolved to regenerate after fire but it all depends on the rains. It seems unlikely that the wildlife that inhabited this area will ever recover.

As a final comment and so that northern hemisphere readers can understand the sheer scale of the catastrophe unfolding in Australia, I include this map.

The world map we all know does not show actual size relativity. If you look at countries by size (the darker blue), the burning continent of Australia is in fact about the same size as USA and just a little smaller than Russia. 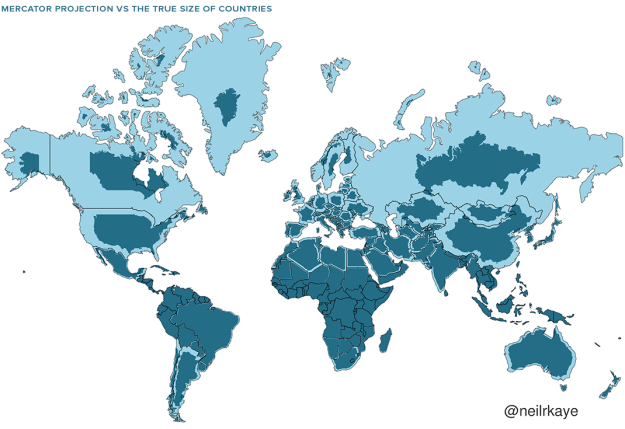