I was casting around for topics this week when a gardening friend emailed: “Was wondering if you could post on your website a couple of shots of the grasses at this time of year – interesting to see the “winter look” – will you be cutting them back or going for the english/european “dead stuff” look?” I see she is not that keen on using capital letters.

As with everybody else, my world has shrunk to be very home-based in this time of pandemic. This is the week that Mark and I were meant to be looking at the summer wildflowers of the Pindos Mountains of Greece and I had thought I would be sharing photos of Lilium chalcedonicum (the beautiful red Turk’s cap lily with reflexed petals) in its natural environment. So disappointed was I, that I looked out the times we were to be making our journey and marked my Monday to Wednesday with the progress of our journey that wasn’t – flying to Auckland on Monday, leaving Auckland for the long haul to Doha (very long at 17 hours 40 minutes non-stop because we New Zealanders do very long hauls), the layover in Doha and then the quick 5 hour leg to land in Thessaloniki in the early afternoon. But if one is going to be confined to home, I am deeply relieved that life dealt me a hand that sees me living in what is currently one of the safest countries in the world with the greatest level of personal freedoms restored.  Life is back to normal here, except for the absence of international visitors and the sanctions on overseas travel. 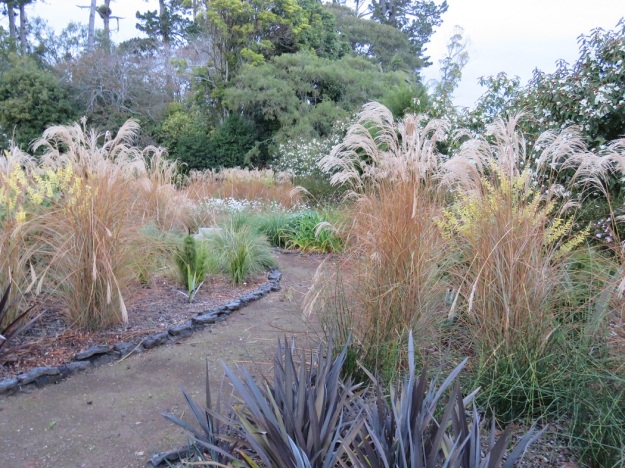 So back to the mid-winter garden. We refer to the new perennial gardens as our ‘summer gardens’ though really they are the spring, summer and autumn gardens. There isn’t a whole lot happening in them in winter but they are not bare.

Planted June 2019 – this garden is just ending its first year

We will go through the Court Garden in the next week or two and cut down all the miscanthus, the six remaining Calamagrostis ‘Karl Foerster’ and the salvias. A frost this week finally hit the foliage of the salvias the day after I took these photos. The calamagrostis is evergreen but very scruffy at this time of the year and I think it will look better in spring with all fresh foliage.

Mark has offered to cut the grasses down. He can do it in a jiffy, he tells me, with the chainsaw. He wants to keep some of the grass for his strawberry patch and is making his annual jokes about taking up thatching. Would I like a thatched shelter in the garden he asks, and we laugh merrily while knowing that the chances of him ever whipping up a little thatched shelter are nil.

The twin borders in midwinter

The twin borders are a good example at this time of year of how gardening here differs from the northern hemisphere. So much of the plant material we use is evergreen. Not for us the garden beds which are levelled to the ground with a strimmer or weed-eater and then covered in a blanket of mulch.

Lily border to the right, caterpillar garden to the left

The lily border is the only garden bed we have devoted to a single plant family that disappears entirely in winter. Well, almost limited to one plant. Fairy Magnolia White forms the backdrop to the border and is in bloom while Camellia yuhsienensis is placed at wide intervals to give some winter interest and is coming into flower. 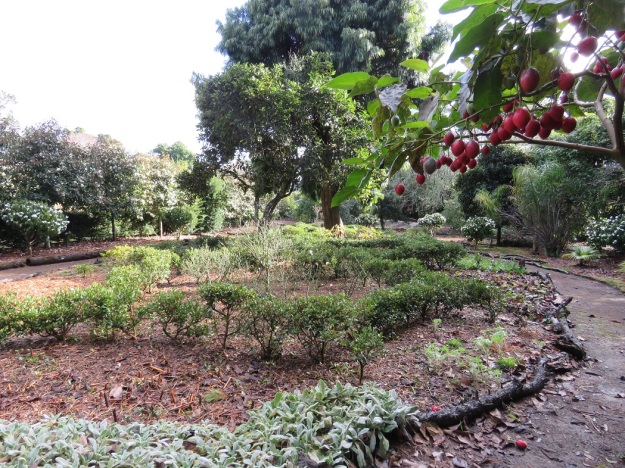 Looking back from the other end of the caterpillar garden

The caterpillar garden is a mix of evergreen and deciduous perennials. We have just given the Camellia microphylla hedging a heavy prune and shape now that its short flowering season is all but over. And I did a full dig and divide on several of the bays. We have to dig, divide and thin in our conditions and the asters and ox-eye daisy were too congested. I also cast out entirely the Eupatorium sordidum I had used in a central enclosure. It was growing well and its blue flowers fitted the colour theme but overall it was just too big and strong in foliage and flower and looked out of scale with the other plants. I have replaced it with hydrangeas, mostly serrata, which are finer in appearance.

On a lighter note, I offer you a clip of UK Prime Minister, Boris Johnson. Shocked I was, I tell you, shocked by this blatant product placement of Tim Tams. But then I discovered that *Penguins* were not, as I thought, paperback books from a respected publisher. NO! THEY ARE A CHEAP CHOCOLATE CANDY. Given that penguins are a southern hemisphere bird (bar the Galapagos few), it felt like cultural appropriation – or maybe, as one wit suggested, ‘faunal appropriation’ to purloin our southern penguins to brand a chocolate candy biscuit. If the future of post-Brexit Britain is dependent on exporting Marmite and Penguins to the Antipodes, it does not look bright.

The NZ pineapple lump, now manufactured in Australia. It seems unlikely that any actual pineapples were harmed in the making of this confection

Tim Tams may be Australian, but I understand the pineapple lump is a New Zealand confection, in origin at least. For readers in other parts of the world, this is a pineapple-flavoured chewy centre coated in chocolate. Regular reader, Tim, who expressed a sudden desire for marshmallows after last week’s post, motivated me to repeat the exercise but in yellow and brown.

Inspired by the pineapple lump, on a bed of spent magnolia leaves we have yellow blooms of midwinter. Left to right: calendula, some yellow leafed shrubby plant I have little interest in so do not know the name, the first jonquil, corydalis, ligularia, salvia, primrose, the last of the dahlias, tubes of kniphofia, clivia seed, hemerocallis and vireya rhododendrons.

Next week may bring to you the delights of the jaffa, chocolate fish or maybe the endangered snifter. Other suggestions from NZ citizens are welcome.

9 thoughts on “The summer gardens in midwinter, Boris Johnson and pineapple lumps.”

This site uses Akismet to reduce spam. Learn how your comment data is processed.