Around 1870, Thomas Jury purchased the farm at Tikorangi in North Taranaki. His family had emigrated from Cornwall in 1841, sailing into New Plymouth on the first settler ship, the William Bryan and originally settling on the western side in the area known as Omata.

The farm was part of land which had been confiscated by the New Zealand government from local Maori during the Land Wars. It behoves us all to remember that the colonial history of our country rests on confiscated and stolen land. Many of the descendants of the original owners – the tangata whenua of New Zealand – still live locally and their loss of land still resonates strongly and remains unresolved. 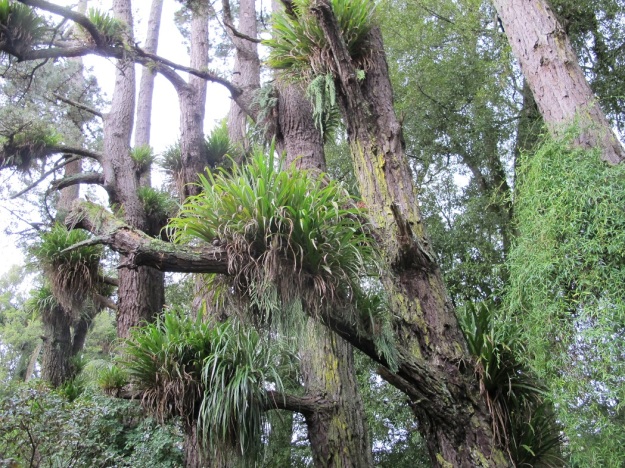 Thomas was a tree planter. As far as is known, the original forest cover of tawa (Beilschmiedia tawa) had been clear-felled to make way for farm land and Thomas would have been planting for shelter against the prevailing winds. It seems likely that he participated in a government project of the day to plant a variety of potential timber trees to trial for future harvest. These included various eucalypts, Pinus muricata and Pinus radiata. Some still stand after 150 years.

A memorable legacy from Thomas is the avenue of native rimu trees (Dacrydium cupressinum) which gives the garden a mature backbone today. The remnant of tightly clipped totara hedge (Podocarpus totara) also dates back over 110 years to when it formed the boundary of the house gardens at the time.

The garden itself was largely developed by Thomas’s grandson, Felix Jury and his wife Mimosa. Once they had constructed the current homestead around 1950, they set about laying the foundations of the formal areas of the garden. This involved a relatively large quantity of stonework, still a feature today. Felix collected stone from where ever he could, including monumental masons. He also purchased stone artefacts which were not appreciated by others at the time, including three mill wheels, stone troughs and the shaped corner stone from an early building. These have been incorporated into garden features. 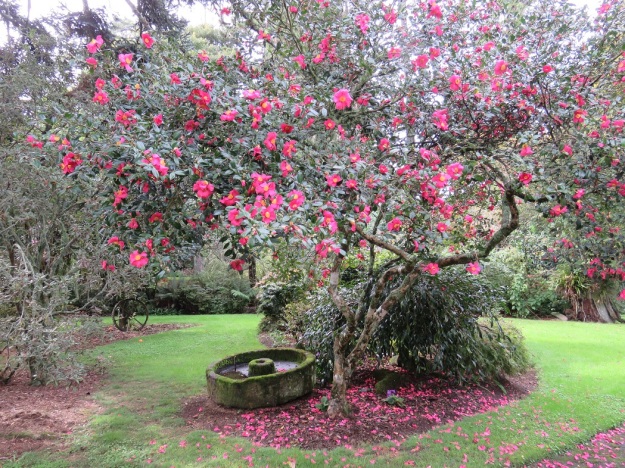 A millwheel, collected by Felix but dating back to his grandfather’s era

In the manner of the day, the design and landscaping is heavily influenced by English style, which Felix and Mimosa had only seen in black and white photographs in books at the time. The original gardens radiate out from the house with every window framing a different view.

Starting with an almost bare paddock, the near flat house gardens were constructed before Felix moved onto the sloping hillside behind, referred to as “the park”. Felix imported plants from all over the world, seeking to extend the range of plant material beyond that which was available in New Zealand at the time. While some of the imported material thrived, there was a lot that simply did not like the high humidity and lack of a winter chill. In part, it was disappointment at the amount of new material which failed to thrive which provided the impetus for Felix’s plant breeding – seeking new plants which would perform well in the conditions.

Finding he enjoyed gardening a great deal more than farming, Felix handed over the farm to his middle son as early as he could. In due course, he subdivided the farm from the homestead and garden, settling the area that mattered most to him on his youngest son, Mark.

The current homestead is the third on the property and was constructed around 1950. The first cottage was lost to fire, as was often the case with early wooden farm buildings. The second, a modest single bay villa, was relocated across the farm when Felix and Mimosa built their two storied home. At the time of construction, they were sheep farmers and New Zealand wool producers received two large wool cheques when the Korean War lifted the value of the wool clip to levels never seen before – or since.

Felix and Mimosa’s brief to the architect was that they wanted a house which would be “timeless”. The result is in fact closely modelled on an English 1920s style but with larger windows. There are strong Art Deco influences inside the house. The external construction of brick and roughcast with a concrete tile gabled roof is relatively uncommon for a New Zealand farmhouse. The house commands splendid views of the garden from every window and stands as the centrepiece.

From the Mark and Abbie Jury era

In 1980, Mark and Abbie returned to Taranaki and Felix made known his plans to transfer the garden. Without a farm to provide an income to maintain the garden, it was necessary to find another means of earning a living. Mark started the nursery on the property, building it up from one wheelbarrow. He and Abbie worked alongside Felix in the garden until his death in 1997, when they moved into the family homestead. 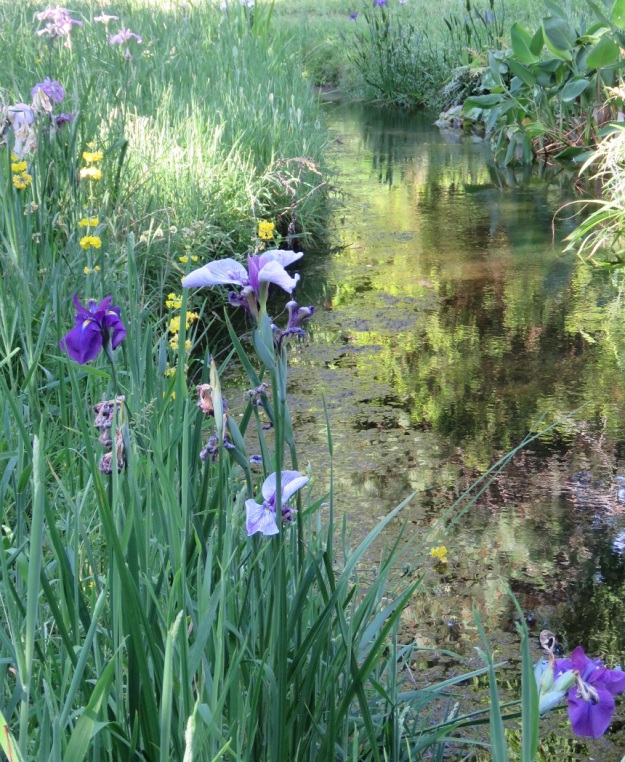 Mark’s first major project was to redirect the stream through the park. Some eighty years earlier, his grandfather had straightened the stream, as tidy New Zealand farmers did at the time, to run along the boundary. The legacy of this was frequent flooding and boggy areas. Now the water is controlled by a weir and flood channel to take excess water, and water once again wends its way through the garden.

Other areas of the garden have been redeveloped and extended, while continuing to maintain the character of the early landscaping. The construction of some eighty metres of imposing brick entranceway was a major development. A grove of camellias became the Avenue Garden. The planting of the former cow paddock has created the North Garden or Wild Garden. Other new areas have been brought into the cultivation as the summer gardens since the plant nursery was closed in 2010. At the same time, Mark and Abbie have been exploring a more naturalistic style of gardening.

While the landscaping is firmly anchored in the English tradition, the huge variety of plant material lifts this garden into Pacifica style which characterises New Zealand’s temperate to sub tropical gardens.

It is not common in New Zealand for gardens to be passed down the generations. Tikorangi has been actively and intensively gardened for over 70 years, with the oldest plantings going back 140 years. Whether it will pass to a fifth generation remains to be seen.