If you will only grow evergreen plants, you miss out on seasonal delights like Prunus Awanui in flower

I am trying to think if there are any plants which do not have an off period and which look good all year round. I have failed to come up with anything other than conifers and they are hardly the country’s most popular plant family these days. Every other plant I have thought of has times of the year when they look better than other times and generally they go through a scruffy period. 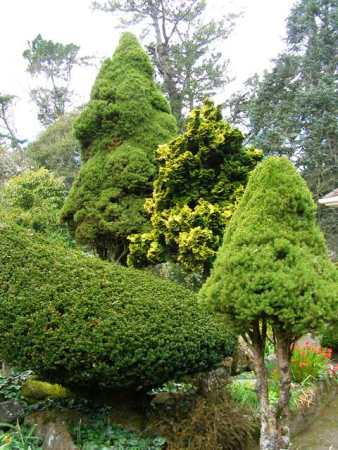 It is a bit like the perceived wisdom that evergreen trees and shrubs don’t drop their leaves. Sorry, but they do. They just don’t drop them all at once in autumn. It is in the nature of woody plants to drop a full year’s foliage every year. They may hold onto leaves for several years, but sooner or later they drop them. Some drop them gradually and quietly all the time. Some have a bit of an off period when they will shed more (usually just before the fresh growth comes). Some, like our enormous Schima noronhae, are semi evergreen and will drop the lot as the new leaves come so it is never without foliage but each set only stays one year.

Gardening and nature is an inherently untidy business. If you can’t live with that, you may be better off in an apartment with no outside space calling out for plants. What started this train of thought was reading a landscaper’s account of a client’s garden where plants were chosen for their year round foliage, their lack of an off season, preferably shiny green and fragrant (presumably they were allowed to flower because foliage tends to be aromatic, rather than fragrant). It is a list of attributes I have often seen before, almost invariably from novices, non gardeners and designers who by very definition tend to have clients falling into the first two categories. It all seems so controlling and static to me – wanting to create a pleasing picture that will stay the same all year. I just think that is what you do inside the house with inert objects away from the ravages of the elements. It is more about design than landscaping.

I can’t imagine having a garden which does not celebrate the seasons. Why would you want to eliminate the variables of nature when that is what makes it interesting? If you refuse to have deciduous plants, you miss the fresh and fulsome spring burst when they look so lush. You also miss the autumn colour on some (though this will be better if you live inland and in areas where you get sharp frosts to signal the change of season). There is a beauty in bare branches throughout winter, especially if the plant has interesting bark or form. These are not as obvious on plants which remain fully clothed all year round. So many deciduous plants burst into bloom, to be followed soon after by the foliage and those plants which flower on bare wood are hugely more spectacular than plants which flower amongst the foliage. Think of magnolias, flowering cherries or chimonanthus. But not just woody trees and shrubs: bulbs mark the passage of the seasons better than any other plant group I can think of. In the static picture garden, there is no place for bulbs, the vast majority of which have an undeniably scruffy season after flowering before they go to bed below ground for their dormant period. But before that scruffy time, they wow us with their flowering brilliance.

That said, I wouldn’t want a garden which only has deciduous plants. Evergreens give year round structure and colour, even if they are mostly shades of green in foliage. It is the mix of plant groups and differing characteristics of plants that makes the garden a more interesting place.

Neither would I reject a plant because it lacks scent just as I would be unlikely to buy a plant on scent alone. We have many scented plants but it is more obvious with most if you pick them and bring them indoors. It takes a very strong scent to stop you dead in your tracks outdoors – some daphnes, perhaps, jonquils, auratum lilies and orange blossom come to mind. These are heady scents but you usually have to be within a metre or so of the plant to smell them. All that fresh air outside dilutes and dissipates scent more quickly than most people realise. It is far more common that you need to stick your nose right into the flower to smell it. Certainly, fragrance is a bonus but a basic criterion for selection? Not in my books.