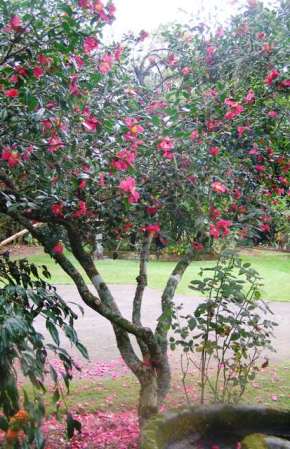 Crimson King heralds the arrival of autumn. It is a sasanqua, one of the autumn flowering camellia family from Japan. Too many people seem to think that sasanqua is synonymous with Setsugekka (how clichéd is the Setsugekka screen planting?) and only comes in white. In fact there are a relatively large number of family members, including Crimson King. It has the usual sasanqua attributes of finer foliage and a graceful, open habit of growth as it matures. In addition to that, the exceptionally long flowering season means it will last well in winter.

Single flowers have just one row of petals and exposed yellow stamens in the centre. The birds and the bees, and indeed the butterflies, need these stamens exposed to be able to feed from the flower. Big full forms or sterile formal flowers are not a source of pollen and nectar. Most sasanquas lack the highly refined flower forms so prized in japonica camellias but single flowers like this shatter and dissipate without ever leaving a sludgy mess below. There is also a simple charm in such a simple flower.

Sasanquas are renowned for being one of the most sun and wind tolerant types of camellias. They also flower early enough in the season to avoid the dreaded camellia petal blight. Overseas reports say that they can suffer from this dreaded fungal ailment but we have never seen it in our sasanquas here. Crimson King has a pleasant scent if you stick your nose right in the flower but I think that the faint waft of fragrance in camellias is rather over-hyped.