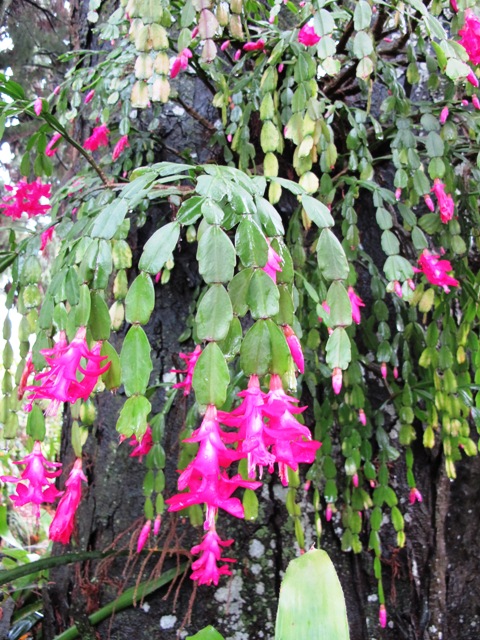 Winter woodland charmer – we refer to it as zygocactus

We have always referred to this plant as a zygocactus. Others sometimes call it a chain cactus (although that is confusing because there are other cacti referred to by that term also). In the northern hemisphere, it is widely called the Christmas cactus because that is the time it flowers, or sometimes the descriptive term of Crab’s claw cactus. In fact it is a schlumbergera, often referred to as a S. truncata hybrid although it is likely to have S. bridgesii in its parentage too. Not having any expertise in cacti whatsoever, I will wait for somebody more knowledgeable to tell me the dominant species in its makeup.

It is a cactus, but not a desert one and it is not prickly, hailing instead from the rainforests of Brazil, where it is epiphytic – using other plants as its host. It is widely grown throughout the world as a house plant and much favoured in hanging baskets because of its pendulous, arching growth, tolerance of semi shade and prolific flowering in the depths of winter.

If you are frost free, you can grow it outdoors and this is what we do. We have it perching and festooning throughout our woodland area where it is particularly joyous in the depths of winter. We only have the somewhat garish, cerise form which is the most common one around. Hybridists have extended the colour range considerably, even to oranges and yellows, but the different colours have not been as vigorous for us.

Being cacti, these are easy to propagate from the flat, jointed leaves. Just leave them to dry for a few days or longer before putting them into a fine, sandy mix.