A campanulata hybrid in full bloom at Sydney Botanic Gardens. Our season has also started at Tikorangi.

On our recent visit to Australia, we made a return visit to Sydney Botanic Gardens. We are not city people so tend to seek out green spaces and gardens. We did at least get to grips with the public transport system to get around. This is greatly preferable to driving and you do not need the details of the dramas on the final Monday morning when it came to returning the rental car we had hired to drive to Canberra. Let it just be said that the internet and sat nav are decidedly less than perfect when it comes to inner city driving and we spent a truly traumatic 90 minutes trying desperately to find the rental car business which saw us taking motorway links first to the airport and then across the Harbour Bridge! Fortunately our flight was delayed several hours which was about the only blessing on an otherwise stressful morning. Public transport is a breeze by comparison and amazingly cheap in Sydney. Buy a transport card at one of the airport shops when you arrive, is my advice. 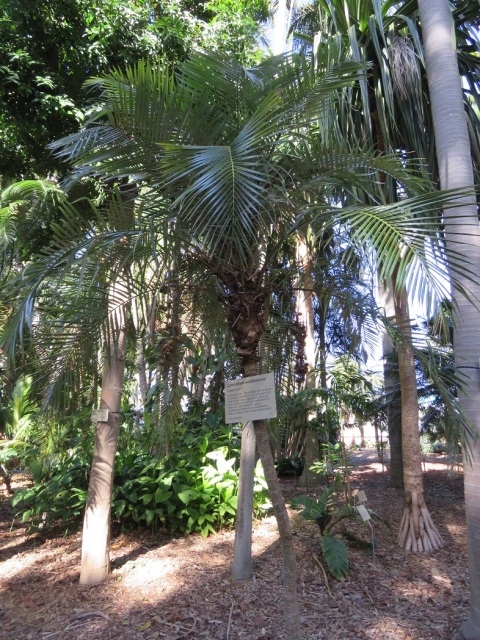 Sydney Botanic Gardens are not huge compared to others we have visited but immaculate, focused on plants they can grow well and in a superb, inner city location by the harbour. It is a lovely place to spend a few hours. It is not a botanic garden that aims to be all things to all people with a comprehensive collection of everything that can be grown. I found on an earlier visit that they don’t appear to do deciduous magnolias. But the palm collection is superb. My knowledge of palms is perfunctory at best but Mark was terribly impressed and browsed through, looking at more mature specimens of ones he has planted here. I was slightly alarmed at the size of Lytocaryum weddellianum, often referred to as the wedding palm. I have planted a fair number of these through our rimu avenue and they are looking very charming after a few years but my mental image was of a palm that would stay somewhat smaller. Fortunately, they are not likely to grow as large as the Sydney specimen in our temperate climate. 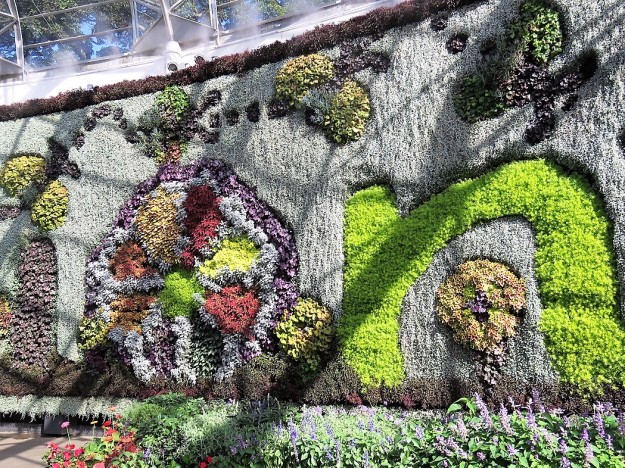 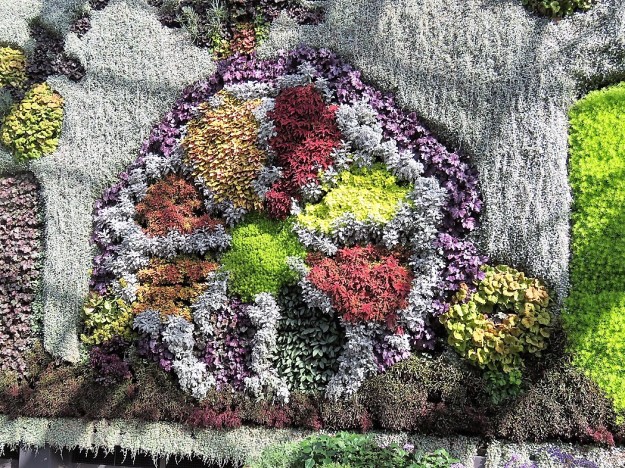 I failed to photograph the new coffee shop attached to the education centre, which had a curious and not particularly convenient design. But in the education wing was the largest vertical garden I have ever seen. It was indoor, hence the shadows from the struts of the building, and the main attraction in a display about the importance of pollination in nature. 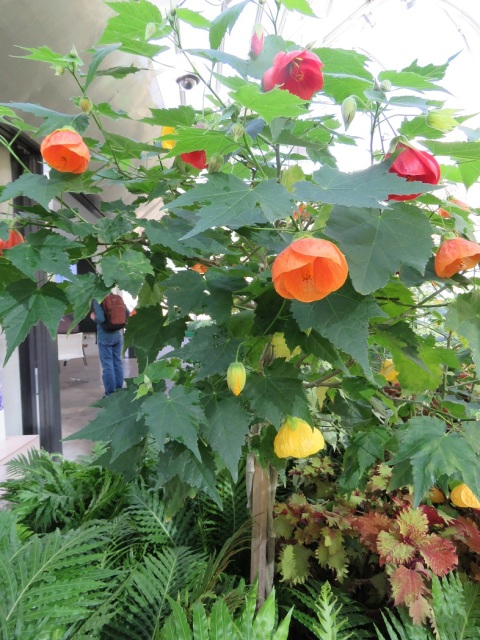 A novelty, but no less charming for that

I did, however, photograph the tri-coloured abutilons threaded through the ground display. Novelties they may be, but they were very cute. If you want to try this at home, you need three small seedlings of a similar size. Plait the flexible trunks and keep them to a single leader each. They will also need a stake. If you are in NZ, I noticed Woodleigh Nursery selling a range of eight different abutilon varieties in a range of reds, orange, purple, yellow and white so you too can try this at home. Start with small plants so that the root systems are also small and you can get the stems close together at the base.

I made Mark pose beside the Alcantarea imperialis to give some sense of scale. These are widely available in NZ and much loved by northern landscapers but our efforts with them failed. We must try again because they are very showy and worth growing.

I was less convinced by the yellow Aechmea blanchetiana but this may be because I have seen bromeliads grown in more marginal conditions showing this colouring as a result of deep stress. To me they look as though they are starved though, being bromeliads, this will not be the case. They were certainly eye-catching.

Trees feature throughout the garden. There is nothing rare about the Moreton Bay Fig (Ficus macrophylla). It is an Australian native and grown widely, despite the inclination of the roots to break paving and to break drains. I just liked the fine example of aerial roots reaching to the ground.

Similar aerial roots were evident on the Monstera deliciosa and I admit I was grateful that our somewhat rampant plants of this at home are not quite as determinedly rampant as they appear to be in a hotter climate like Sydney.

I showed the Sydney Botanic specimens of the Wollemi pine last week. I was also taken by another tree native to New South Wales, Queensland and New Guinea – the Araucaria cunninghamii or hoop pine. It must have been at least 25 metres tall and those little tufty pom poms will be its natural form. Nobody has been up an extension ladder cloud pruning it.

The stand of flowering cherries in full bloom drew the crowds and proved yet again that humans like colour and blooms, preferably in abundance. It is a locally bred hybrid, a cross between the wild cherry Prunus avium and Prunus campanulata, named ‘Yvonne Matthies’. I have no idea if it is available in NZ and, of more importance, whether it is sterile or not. I imagine with all their bats and birds in Australia, they are not so keen on potential weed cherries that are spread by birds. 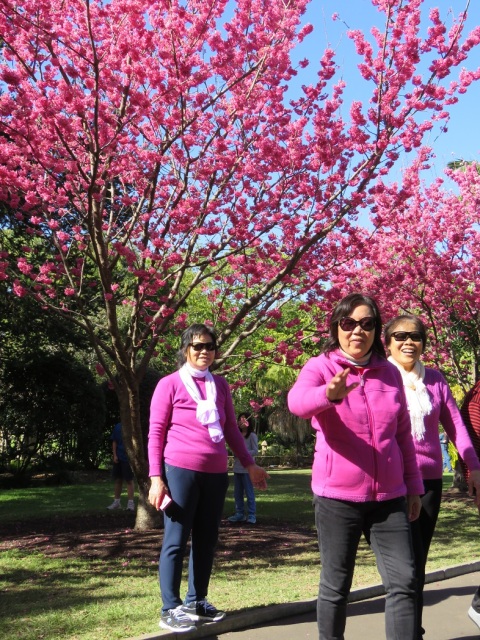 I particularly appreciated the tour group with the three women who, by pure chance, toned so perfectly with the blossom. They were equally delighted and took many (many, many) photos. 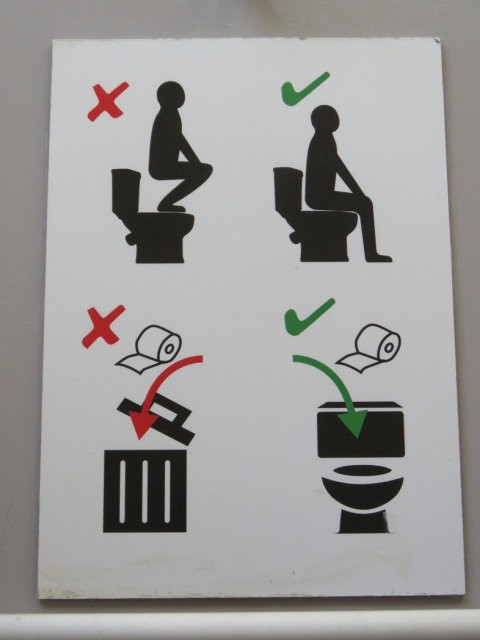 Finally, the sign in each toilet cubicle spoke volumes about the sheer number of overseas visitors these gardens must attract. Toilet etiquette and requirements vary throughout the world. A Twitter friend was more worried by the fact that the roll of toilet paper is depicted round the wrong way. it should be unrolling from the top, not from underneath. That is all I will say on this matter.

3 thoughts on “A visit to Sydney Botanic Gardens”