The white form of Oxalis purpurea – the best of them all

Back in our nursery days, we had a large range of ornamental oxalis. I see in our old mailorder catalogues that we offered over 20 different varieties that we had in production at the time and I wrote extolling their autumn merits for several publications.

Twenty years on and the oxalis collection has refined itself down. It is the difference between gardening in containers and gardening in the soil. Some of those varieties were so delicate and touchy that we have lost them. Others needed to be kept confined because of their invasive proclivities. Some flowered prettily enough but their season was so short that it was hard to justify their place in the garden. I decided years ago that I was not going to fluff around with plants in containers. We have quite enough garden with many different micro-climates. If plants couldn’t perform in the garden, I didn’t have the time or inclination to nurture them in controlled conditions in containers.

These days, the oxalis we still have are the stand-out performers (and a few of the nasty weed ones that most of us battle – particularly the creeping weed which I think is Oxalis corniculata). The star has always been and still is the beautiful, well-behaved Oxalis purpurea alba. Large white flowers in abundance over a long period of time and not invasive. At this time of the year, I am more than happy to use it as ground cover in sunny positions. Oxalis flowers don’t open without the sun so they need to be in open conditions. 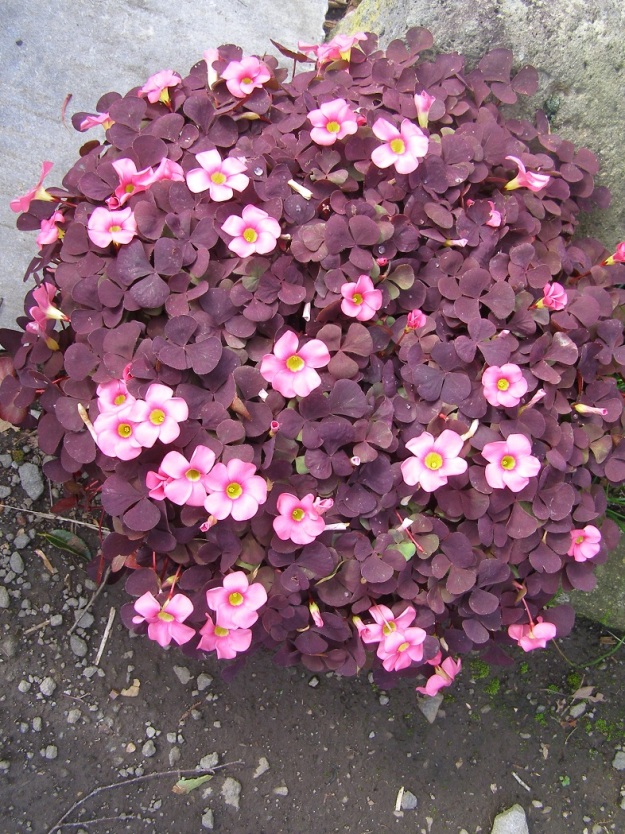 O. purpurea is a variable species. The striking red-leafed form (O. purpurea nigrescens) with pink flowers comes a bit later and is invasive so needs to be kept confined. We also have a strong-growing (somewhat invasive) green-leafed form with very large pink flowers which is worth keeping and also has a long flowering season. Back in the days, I recall more than one person telling me that there was a red leafed form with the large white flowers but I have never seen it so I rather doubt its existence.

Oxalis luteola as runner-up in my best garden oxalis list

The standout yellow is Oxalis luteola. It, too, is well behaved and forms a gentle, non-invasive mat that flowers for a long time in mid- autumn, combining well without competing with other bulbs like the dwarf narcissi that are in growth but won’t flower until late winter and early spring. It leaves the rabbit-ear Oxalis fabaefolia in the dust for length of flowering time. Both have large, showy yellow flowers but the latter’s flowering time can be measured in days rather than weeks.

I am very fond of little Oxalis massoniana with its dainty apricot and yellow blooms but it needs a bit of nurturing to keep it going. The popular old candy-stripe O. versicolour is happy left to its own devices in the rockery but will not come into its season for a few weeks yet. It is the only one I know that looks more interesting when its flowers aren’t open because the striped buds disappear into a fairly ordinary white flower on sunny days.

I have hung onto the strong-growing O.eckloniana for its large lilac blooms but I keep it confined to a shallow pot sunk into the rockery. I could rustle up a few of the others from around the garden, like O.hirta in both lavender and pink, O. bowiei, O, lobata, the unusual double form of O. peduncularis  and O.polyphylla but they are not the star performers that luteola  and purpurea alba both are.

If you are into container gardening, a collection of different ornamental oxalis species give interest on a sunny terrace or door step from autumn to mid-winter. I saw somebody listing a whole range of different oxalis on Trade Me at one stage. In fact, it looked like somebody had bought our full collection all those years ago and kept it going so they are still around. If somebody offers you O. purpurea alba or O. luteola, don’t reject them just because they are oxalis. They are worth having. 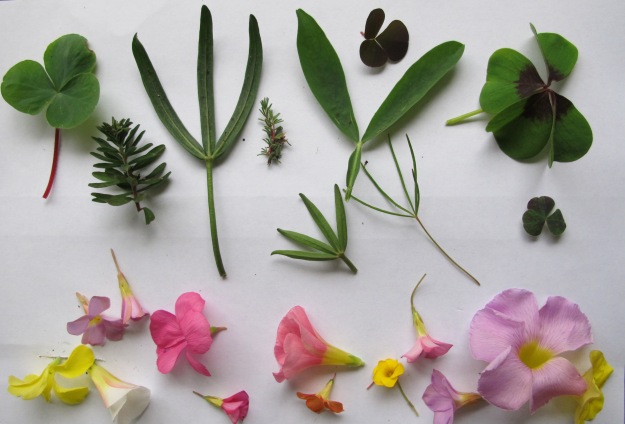 Oh look! Here is a little display board I prepared earlier of under half of the oxalis that we used to grow 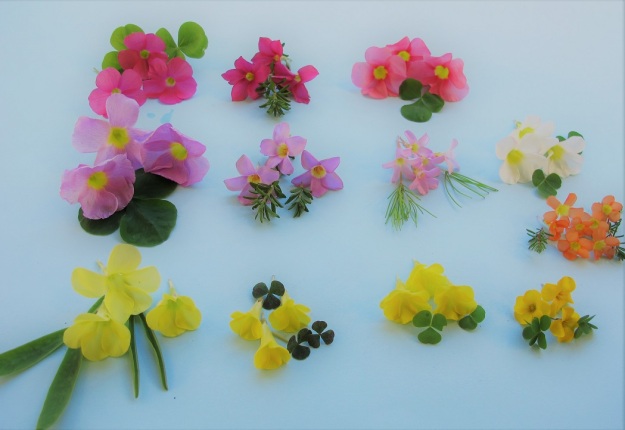 10 thoughts on “The ornamental oxalis”