We only have two species of hippeastrum in the garden. And one hybrid that bravely lives on in the rockery despite never receiving any praise and I don’t even appear to have photographed it. Most people probably grow the hybrids rather than the species and they are a genus that lends itself to novelty status – enormous flowers and some odd variations that are not necessarily creations of beauty.

Hippeastrum aulicum in the garden

Hippeastrum aulicum in particular is a mainstay of our early spring woodland. I have always described it as looking more like a Jacobean lily. Because it thrives with us, we have a lot of aulicum though we don’t get seed on the plants in the garden. Mark says this is because we are not hot enough but it will set seed if brought under cover.

Hippeastrum papilio. It has taken a while to increase it from a single bulb but we now have two patches like this.

It has taken a while to build up H. papilio but we are on track now with quite a few flowering in the same woodland conditions that suit H.aulicum. They certainly have a wow factor as a garden plant but we don’t get seed. Whether this is temperature related or they are not self-fertile, we do not know.

Mark wondered if we would get any interesting variations if he crossed the two species, while acknowledging that it was more a cross of convenience rather than one based on using the best possible parents. He did it so long ago that he can’t remember now which species he used as the seed-setter. Nor can I remember how many years it is since I grew tired of the pots of seedlings kicking around the nursery so took it upon myself to plant them out. Maybe about eight years?

The plants have done absolutely nothing in the garden except grow larger in the intervening years. Until this week! Two are flowering, well over a decade after the cross was made. Curiously, they are flowering before either of their parents: H. aulicum is only just putting its flower spikes up and is still some way off showing colour and it will be October before H. papilio blooms. I probably planted out a tray of 40 pots all up so there are a whole lot more to come. Eventually. 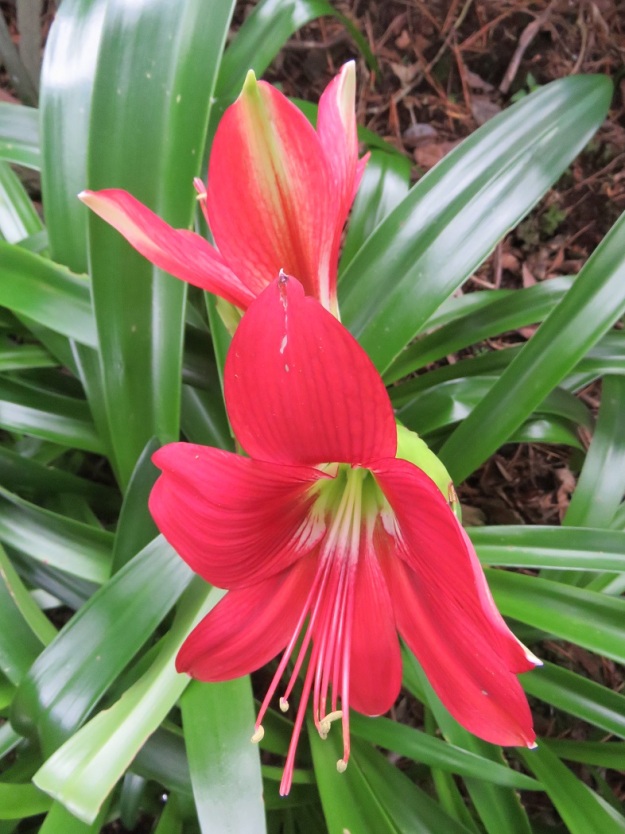 Nothing to get excited about

So what did we get? I was a bit underwhelmed by the first one. It only has two flowers to the stem and really just resembles a larger version of H. aulicum, maybe with more prominent green veining. I prefer the original species at this stage.

It is big – much bigger than its parents. And showy. But is it an improvement as a garden plant?

The second one is certainly larger, showing considerable hybrid vigour. The flower spike is over a metre tall and the spike has five big blooms opening on it. It is another red with green veining. So it looks as though it will be big and showy, if big and showy is how you like your bulbs. We would be happy with smaller and more interesting. Mark’s only comment so far has been that it never was a brilliant cross in the first place but it was just to get some variation in the garden.

Maybe the other 38 or so will show more interesting variations over the next few years? A large part of gardening is optimism.

I see there are about 90 species of hippeastrum though most of the hybrids are from just six of the species – including H. aulicum which surprised us, but not H. papilio.

5 thoughts on “Waiting for hippeastrum flowers”