It might as well be Felix, but it’s not

Magnolia time. Many are surprised to hear that Felix Jury only ever named eight magnolias. Mark has only named and released three so far (with a fourth in the pipeline) despite raising and trialling hundreds. Why so few? We are picky. With the benefit of hindsight, we would probably have released only seven of Felix’s eight. Atlas was named for flower size but really is not up to the quality of the others in terms of long term performance.

We can do plenty of ring-ins, generic copies, slight improvements or variations. But while roses and camellias are like buses (there will be another one along in a few minutes), we see magnolias as being for the long haul. They are nowhere near as easily hiffed out and replaced and most people can only fit one or two into their garden. To name something new means it must be a breakthrough, a major improvement on what is already available. It takes years to trial and select a new magnolia and we like to be very confident with our releases. We took another walk around this afternoon, looking at the lookalikes. At this early to mid season stage, it is still the stronger colours that dominate. I will update as the pales and whites come into full bloom.

Or how about Bambino Tulip?

It’s not Black Tulip, but it might as well be 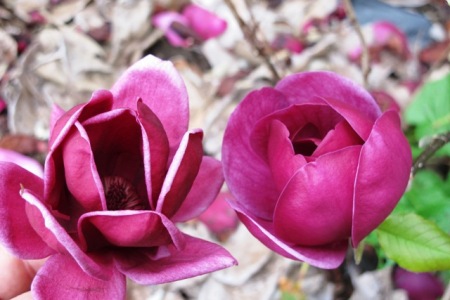 Genie to the left, our seedling to the right

Our equivalent of Ruby

Lanarth sets the standard. Is this significantly better? Probably not.

But maybe there is a future in patio magnolias? 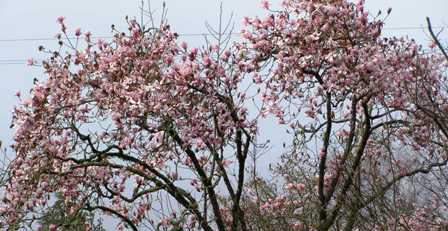 The reticulata camellias are in full bloom

Tikorangi notes: August 27, 2011
Last week it snowed, followed by a frost in the coldest few days we can ever remember. This week it is indubitably spring. Certainly there is damage in the garden – many of the early magnolias and michelias did not appreciate it at all, though M. sargentiana robusta appears to have come through unscathed. The same cannot be said of the big-leafed rhododendrons. I was searching to find an undamaged bloom and Mark felt that one of my shots of an R. grande hybrid showed we could rename it as Hokey Pokey (a reference to a favourite NZ icecream which has streaks of butterscotch coloured candy throughout). The big leafs have gone the same way as Magnolia Lanarth – 2011 may be the least memorable flowering ever. The campanulata cherries are alive with native tui, the reticulata camellias are in peak flower, the lovely daffodils continue to flower in succession and, just to prove that even in frost and snow, our climate can’t be all that bad, a vireya rhododendron, R. konori, is flowering beautifully and completely untouched in the rose garden area.

The beautiful, fragrant and touchy vireya R. konori flowers on regardless

Mark has been poddling about with his calanthe orchids while I am grooming the rockery. Winter pruning is complete (fruit trees, hydrangeas, roses, wisterias and the like). Now we are laying mulch on many of the garden beds – we favour our home made compost for this.
Our first garden visitors for the season have started arriving but if you want to see the magnolias at their peak this year, hold off for another week or two to allow more to come out. That said, Magnolias Felix Jury and Black Tulip are recovering well from the earlier ravages by the weather and there are some lovely flowers showing now.

The coldest spell of winter weather we can remember still continues. While Mark was entranced by the unbelievable event of snow falling here on Monday, there is no doubt that the unusual experience of a major hailstorm followed by an exceptionally heavy frost, culminating in snow and a second frost this week has knocked the early magnolia display. Magnolia Lanarth has been particularly badly hit and we may just have to look back to previous years to remind ourselves of how fantastic it usually is. (Check out the Magnolia Diary I kept two years ago). Usually we are peaking with the first flush of magnolias in bloom around now and we have an unsurpassed display of red flowered types at this time. Not yet. Many of the new cultivars set flower buds down the stem so will open fresh blooms but it appears that we will be particularly grateful for the second peak we get in early September with the mid season varieties, including the magnificent Iolanthe.

With the threat of frost, I have upon a couple of occasions rushed out with sheets of newspaper to cover the planting of Lachenalia glaucina that we have in the open. Sheets of newspaper work because if they blow off in the night, it means we have sufficient wind to disperse the frost. We grow a wide range of lachenalia in the garden to give us flowers over many months and only a few are vulnerable to cold temperatures in our conditions – glaucina is one. It is a lovely thing and for the first time in years, we have pots of it for sale ($10). They are only just starting to put up their flower spikes so I had to resort to a photo from previous years. Lachenalias come in blues, lilac, pink, red, yellow, orange, green, white and various colour mixes – we have available for purchase the red bulbifera, white contaminata, blue glaucina, yellow reflexa hybrid and an odd, predominantly green form of aloides.

We are open for plant sales every Friday and Saturday (other days by appointment) and we have Eftpos here but we only sell to personal customers. Sorry, no mailorder. If you want to check what else we have available, check our Plant Sales

The first flowers opening on Magnolia Felix Jury this morning

After a bitter cold couple of days last week and a frost which has done a relatively alarming amount of damage, this week it seems as if spring has arrived with the start of August. The sky is blue, there is enough warmth in the sun to see our Lloyd make his appearance in shorts (neither Mark nor I are that hardy) and the magnolias are opening.

We advertise that the garden is open from the start of August, but if you want to see the magnolias at their best, keep watching here (or follow us on facebook.com/thejurygarden). We are picking that the first flush of magnolias will peak in about a fortnight. We usually get two peak flowerings here – the early ones which are heavily dominated by the best reds and then a few weeks later, the mid season varieties in early September. Vulcan is currently flowering, Black Tulip is just opening and we have the first few flowers on Felix Jury which just keeps on getting better every year.

In plant sales this week, we look at Black Tulip and at camellia hedging options. We were both amused and quietly chuffed to learn from a garden article in The Telegraph that Mark’s Magnolia Black Tulip had been presented to the Queen last year. Henceforth, we shall refer to it as a magnolia fit for a queen. It was quite a gratifying Telegraph article really, with high praise for Mark’s new Fairy Magnolia Blush which is just becoming available in the UK. 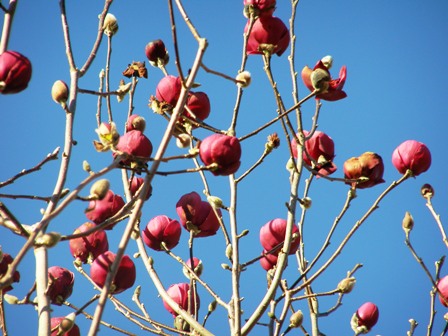 We were greatly amused to discover that Mark’s Magnolia Black Tulip was presented to the Queen last year. Yes, as in Queen Elizabeth of England. Apparently she likes magnolias. Sadly, we were not invited to the ceremony. It is coming into flower here now and you too can buy a magnolia fit for a queen. What is more, you get to meet Mark or me in person at the same time. Our trees on a sunny slope are coming into flower now, though it is still early in the magnolia season for us and peak display won’t be for another fortnight or so. Many of magnolia plants have flower buds so you can get the benefit of flowers immediately – the days when you had to wait a decade are long gone. Black Tulip is a splendid option for a feature tree to be viewed close up, so is ideal for smaller gardens. Because the flowers are so dark, it can meld in the bigger landscape where some of the larger, bolder flowered types will have more impact, but its perfect form certainly seems to appeal to people when they view it close up. 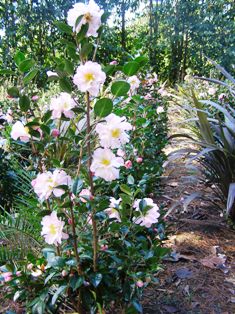 If you are after hedging, we have various options in camellias from small plants for small, low hedges to small plants for people with small budgets and patience, to instant hedges for those with larger budgets (they will still be cheaper than building a fence!). We have crops in the field (in other words we will dig to order) which are around five to six years old and ready for instant impact. Options include Mimosa Jury, Dreamboat, Apple Blossom Sun, Moon Moth, Roma Red and transnokoensis. These field grown plants are not listed under plant sales on the website – you will need to talk to us about them.

We are open for plant sales every Friday and Saturday (other days by appointment) and we have Eftpos here but we only sell to personal customers. Sorry, no mailorder. If you want to check what else we have available, check our Plant Sales