Pink Jazz, one of Mark’s hybrids that is standing the test of time here as a healthy garden plant. It was named for our elder daughter, Jasmine, who had a passion for hot pink in her teen years.

Gardening is as driven by fashion and trends as many other pursuits. It is vireya rhododendrons that brought this to mind. Back in the late 1980s and 90s, they were a seriously hot ticket item. Because they are really easy to propagate, the market was saturated with small plants surrounded by big hype and an endless stream of new varieties being unleashed on an eager buying public. The big luscious looking ones with heavy, felted foliage and big, fragrant trumpets were the most sought after. Here was tropicalia at home even though New Zealand does not have a tropical climate.

Back then, we had a commercial nursery and vireyas were one of our big lines. We produced thousands of them every year and Mark had a full scale breeding programme running on them, naming new cultivars at a cracking rate. I can tell you that they were one of the easiest lines to propagate with the highest success rate from cutting, taking half the time to get to a large grade than the hardy rhododendrons and camellias. It was all downhill from then on. They needed the most intensive spray programme of any plant we produced and even so, there was a high death rate before we ever got them to the market. They are vulnerable to almost every disease that is going, they have pathetically small root systems to support quite abundant top growth, they are frost tender and needed full-scale frost protection in commercial production – even under shade cloth – and they can die almost overnight.

I recall the odd visitor asking the names of certain plants and Mark would toss off that it was a Vireya wiltanddieonyou. Because so many did just that – wilt and die. The species were particularly touchy along the big luscious ones that everybody wanted. 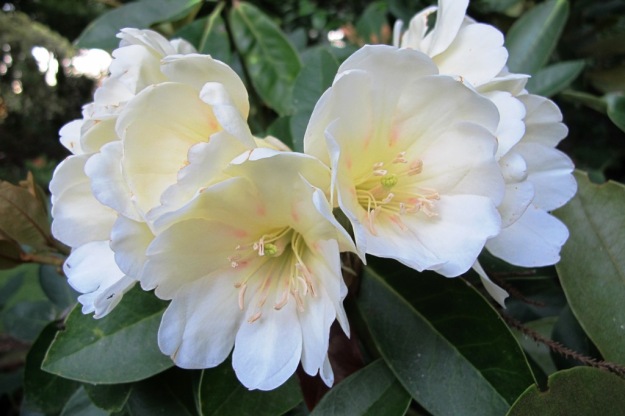 R. konorii is a species with the desirable traits of large flowers, strong fragrance and heavy foliage but the resulting hybrids are not always easy to keep growing well. This is an unnamed one of Mark’s that is still doing well in our garden.

But we would not be without them in the garden. If you have enough of them, you can guarantee that there will be vireya rhododendrons in flower all year round. They don’t get large. They fit in well to subtropical woodland conditions and they don’t need a whole lot of attention. We accept that some will suddenly die, even after many years and we don’t expect every plant to thrive. Those that do, make a worthwhile contribution.

The late Os Blumhardt had a major breeding programme on vireyas and gave us a number of his seedlings, including this good performing one in our swimming pool garden. It is reliable and healthy rather than outstandingly showy

Because vireyas originate from near the equator where day and night length remains pretty even all year round, their flowering is not triggered by changes in day length. This is why they tend to flower randomly and for extended periods, at times many months although we get the best blooming in autumn and spring and that will show up from this month on. With our free draining volcanic soils, we just grow them in the ground.

Common wisdom, particularly in Auckland, was that vireyas are epiphytic so best grown either as an epiphyte on established trees or in containers with their roots tightly confined. Ponga pots used to be rage, maybe still are in some circles. While it is true that in the wild, many species are ephiphytic, the vast majority that are sold are modern hybrids with a distant connection at best. What they want is excellent drainage without getting too dry. Only hard frost will kill a vireya faster than wet roots in a heavy, clay soil. But if you have the roots heavily confined, they can dry out too much and start to look hard done by and scruffy.

These days, we rank ongoing survival, good bushy growth and an abundance of bloom above other characteristics – often features of the smaller flowered, less extravagant looking cultivars. These are the ones that are standing the test of time as garden plants. The oldest vireya in our garden is the plant of R. macgregoriae that Mark’s father, Felix Jury, brought back from New Guinea in 1957, kickstarting the breeding programme. Astonishingly, it is still alive and healthy when many others have fallen by the wayside.

If you want to try growing plants from cuttings, vireyas can root without special facilities and equipment. You need to use green stems which are firm, not floppy. Cut off a sliver (called “wounding”) on two sides of the stem of the cutting, extending for 2 – 3 cm. Unlike most plants, the roots will form from the wound or callous, which is why you want two to get a balanced root system. Cut the leaves in half to reduce water loss and stick in potting mix. Keep the pot in shaded conditions until roots start to form – usually within about six weeks.

First published in the April issue of NZ Gardener and reprinted here with their permission.

R. macgregoriae is still going strong in our garden after 60 years