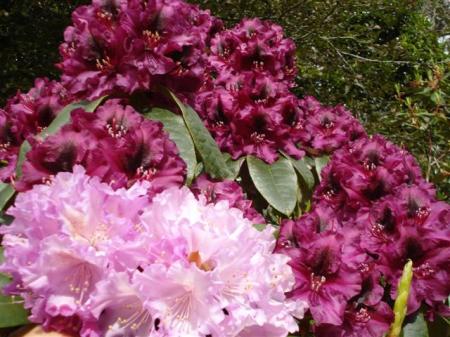 Olin O. Dobbs - a vision in blackberry and Caroline Allbrook - enchanting in lilac

It is only appropriate to keep with rhododendrons as our Rhododendron Festival steams on so it is two half-siblings this week. Olin O. Dobbs is the mysterious and unusual one (they share Purple Splendour as a father) – spectacular conical trusses in the deepest blackberry colour, rivalling Blackberry Nip rose but Olin does not fade out. Unfortunately, despite being much sought after when in flower because of the striking hue, Olin is difficult to propagate (basically needs to be grafted) so is virtually unavailable on the market these days. He also prefers a colder climate and gets infested by thrips here so does not look crash hot as a plant for the other 50 weeks when not in flower. We don’t mind because we will trade all that for two or three weeks of blackberry splendour.

The half sister, Caroline Allbrook, is a pretty, pale lavender which is a reliable performer every year here. Caro also distinguishes herself by holding well when picked which is by no means true of all rhododendrons. Great flower truss, easy to grow and should be reasonably readily available in the marketplace. She does look rather fine planted beside Olin in our carpark area but if you could use the burgundy foliage of loropetalum to contrast, in the absence of Olin.

For devotees, the seed parent of Olin is Mars and for Caro it is the species yakushimanum. 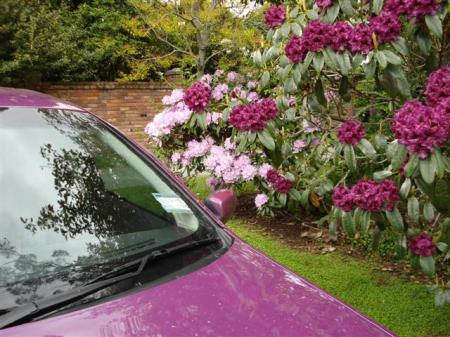