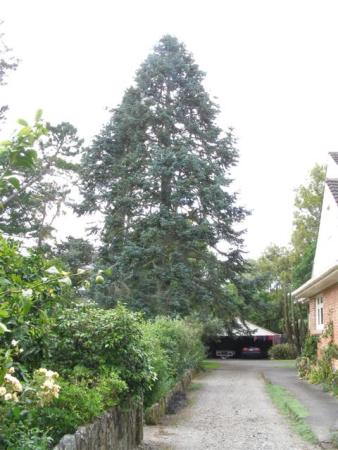 The need for the Christmas tree is starting to weigh upon me. The deadline is December 17, the day when our first returnees arrive home for the traditional family Christmas. We could of course join the throngs who have sacrificed authenticity for convenience and bought an artificial tree. I was listening to a panelist on National Radio last week who mentioned his tree. A man’s tree, he called it. It comes complete with all decorations glued on to the branches so all he has to do is fold it out each year. It just would not do here. I would be pilloried and derided by the returning children who would take such a purchase as a cop-out on every front. They would probably assume that it indicated their mother was entering premature old age.

Alternatively, we could join the throngs who go out and buy a tree. Wash my mouth out with soap. How could I suggest such an action? No, our tree must be harvested at home.
Mind you, if you head out and buy a tree, you will generally buy a nice, dense tree of the correct, prescribed pyramidal shape. In New Zealand this tends to mean a choice of a pine tree, another pine tree, the common pine or pinus radiata. We have made the pine tree (a native of Monterey in California) our own in this country, for Christmas trees as well as timber. In the past Mark has been stung by criticism of his selection of wildling pines and has even resorted to wiring in additional branches to increase the volume in sparse areas. Last year he selected a particular tree which he then trimmed a couple of times to encourage shorter, bushy growth. Alas, in the ten days between checking it for the final time to make sure that there were no feathered friends of the ornithological persuasion resident in the tree and when he went out with the pruning saw to harvest it, a family of chaffinches had moved in. He could not cut it down and we had to make do with an emergency installation of four clipped matai trees in pots.

Over the years we have had a variety of different trees. One year I despaired of the pine needles with which my vacuum cleaner struggled to cope and I tried a tree skeleton, spray painted white. It was not a hit with the children. These days it might be seen as more environmentally friendly because when you think about it, entire forests of conifers are felled each year to furnish the homes of the western world for a few short weeks. I was in London in early December one year when the markets were full of Christmas trees which had been shipped in from Norway and Scotland. These were beautiful, dense trees, mostly Abies nordmanniana or Abies procera (the Noble Fir), and, being horticulturally inclined, I knew that such plants are initially very slow growing. The trees had to be at least eight years old and probably more. My oh my, eight or more years of growth to furnish the front rooms of Londoners for two weeks. Second Daughter was equally struck by these and I recall a blog she posted soon after her first Christmas away from home. Wandering around Maida Vale where she was staying, she took photos of the discarded trees out the front of all the residences where they were awaiting the green collection. Christmas Is Over in London, she entitled this on-line photographic essay.

An American friend is a little scathing about our New Zealand habit of using pinus radiata. The needles, she points out, are too long to allow the decorations to stay on easily. If you look at synthetic Christmas trees, they are certainly not modeled on the pine tree. Most are abies (fir trees) which have tufted growths that are much shorter and easier to work with. But the ideal tree needs a certain amount of horizontal branching from which to hang individual Christmas baubles. If the cone shape is too tight, all you can do is to wreathe it in tinsel and lights. In the US, my friend points out, you have a choice of several different varieties of tree. Internationally, abies are favoured because they don’t shed needles, picea or spruce are common but are less happy about surviving cut off in their prime and show it by shedding needles and there are many different pines to the common radiata which are used overseas. The Norfolk Island pine (Araucaria heterophylla) and its smaller cousin Araucaria columnaris make perfectly shaped trees. If you want to be indigenous, matais and miros could be suitable candidates (totara are a little too prickly, as are rimu). But the bottom line is, which trees are you willing to cut off for a mere two weeks Christmas gratification? Call me a snob, but I worry less about sacrificing the common pine whereas it is distinctly sacrilegious to sever the nobler conifers from their roots. My conscience is soothed even further when we recycle trees or branches that are for the chop anyway, even if this means some rather odd installations. This year it involves the extension ladder and cutting the top out of a mature golden chamaecyparis because its top knot has reverted to a much more open growth. The difficulty for Mark may be getting it down intact from ten metres up but my challenge is greater. See, it is a green and gold variegation and they are devilishly difficult to decorate with any aesthetics at all because they just make tinsel look even tackier than usual.

The final word on the topic has to rest with our dentist who regaled us with the charming story of heading out to buy a Christmas tree one year from the foremost supplier locally and finding that he had managed to bring home a specimen with a nest containing a fledgling thrush. The mother had presumably scarpered at the first sign of disturbance (and we won’t dwell on the mental image of bereft Mother Thrush left behind). Said dentist and wife then spent the two weeks leading up to Christmas hand rearing the thrush with worms dug fresh each morning. After all, how could you have a Christmas tree in the house knowing that you had consigned its now homeless inhabitant to an early death? As the thrush gained in size, they set about teaching it to fly with regular lessons outdoors, tossing it in the air until it caught on to the process. It would be a sentimental lie to say that it flew to freedom on Christmas Day. In fact it spent some time sitting around perched on the washing line (and no doubt pooing indiscriminately on the washing) but let that not detract from what is a charming home grown Christmas story.