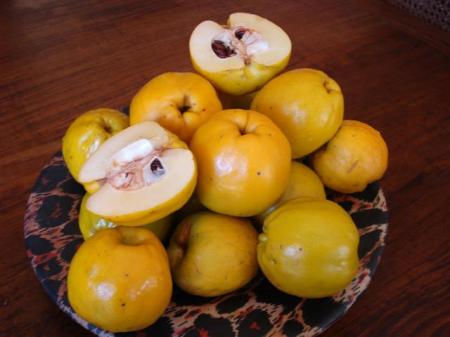 I have been harvesting the chaenomeles though harvesting is perhaps too much like hyperbole. I have been picking up a bowl of their golden yellow fruit. Most will look at the fruit and say quinces but they are not. If you said japonica apples, you would be closer to the mark. Quinces – or cydonia – are small trees from central and south eastern Europe and are closely related to apples and pears. The fruits look like golden pears. The chaenomeles are from east Asia, including Japan, and are shrubs referred to inaccurately in the past as japonicas. In fact we associate the flowering sprays of japonica strongly with Japan where the simplicity of single flowers on bare wood is evocative of that wonderful, sometimes stark, simple beauty so prized in Japanese gardening and floral art.

Back to my chaenomele fruits which are not only very decorative and long lasting, they also exude a perfume which I find pleasant. It is such a shame you have to work hard to transform the crop into something edible. The usual approach is to turn them into japonica jelly though I admit I have never tried this. My jam making efforts are limited to the raspberries these days and as it takes us about three months to get through one jar, there is a not a big incentive to be more adventurous. I did try making chaenomeles brandy one year, wooed by the delightful aroma of the fruit. I figured that I would follow the recipe for damson gin though this fruit clearly needed slicing. So I layered the slices of chaenomeles alternately with sugar in the mandatory stoneware crock, of which I happen to own several. Then I poured a bottle of brandy over it all and put it in a dark place for a year to gently steep. Yes, a whole year. Now, the damson gin recipe says that after a year, you should strain off the liquid, dilute it with another bottle of gin and leave it to mature for a second year. In my forays into damson gin, we waited the first year but never made it to the second bottle of gin and a further twelve month wait. Neither did we get past the mid stage with the chaenomeles brandy which we strained off and drank after twelve months. It was pleasant if a little underwhelming. But this is not a household where we ever drink liqueurs or indeed any sweet drinks, so perhaps our palates were just not accustomed to sweet, high octane alcohol. I prefer my brandy with lime and soda.

These days I just bring a bowl of chaenomeles into the house for aesthetic reasons. They sit for weeks without going off, golden orbs with an odd waxy coating, exuding a natural tropical perfume. So much nicer than those synthetic air fresheners marketed by Glade, I feel. The remainder of the crop hang on to the bush until their weight pulls them off and they lie below. Although the bushes are rangy, scrubby things of no merit or form out of season, in early spring the dark pink flowers are eye-catching and in autumn the fruit is a feature for a good couple of months.

In case you are wondering what a chaenomeles tastes like, I can assure you that the taste and texture does not match the fragrance. They are astringent – will pucker your mouth – but apparently in colder climates, the first frosts reduce the astringency. This is a condition referred to as bletting (there is a piece of information which you may need one day for Trivial Pursuits or quiz nights) and bletting is a key to growing good Brussels sprouts, swedes and turnips. Personally I prefer to live in a climate where we can grow oranges and avocadoes even if that means we can not have bletted crops since we never get a run of heavy frosts, or much frost at all.

Some years the chaenomeles pass me by because the good fruiting bushes (and by no means all of them fruit as spectacularly as this one) are in an area of the garden which has been a bit of a wasteland. Probably every large garden, and quite a few smaller ones, have areas where you hurry past with eyes averted because you really don’t want to address the problems there and if you ignore them, perhaps other people won’t notice them either. There comes a day when you can no longer pretend that the area does not really matter. You have to get in there. In our case, it is an area where the ever growing trees and shrubs had turned a formerly sunny position into overgrown shade forever making incursions outwards. It certainly helps to have somebody at your behest with a chainsaw and mulcher but you can get a long way with strong loppers and a sharp pruning saw. These jobs always escalate beyond what was originally envisaged as you keep penetrating onwards and inwards. We have trimmed and removed a prodigious amount of material. We have allowed sunlight into areas which haven’t seen light for nigh on a decade. We have rediscovered plants which only Mark ever knew were there. We have dug out sizeable nikau palms. It is possible to have too many self-seeded nikaus and we have more than enough. In fact we have turned dense forest or jungle into woodland.

Woodland means keeping a lighter canopy of larger plants but sufficiently open to allow reasonable growing conditions below. I haven’t finished yet but I have reached the fun stage where finally I have had the chance to try the traditional method of establishing a drift of spring bulbs. That is broadcasting handfuls of bulbs and planting them more or less where they fall. It avoids the natural tendency to plant in rows or as edgings on the margins. In this case, I have been scattering English snowdrops and interplanting with Cyclamen repandum, the last of the dwarf species to flower in spring. I have removed all the herbaceous leafy plants and relocated them. In this one patch, I don’t mind if the ground is bare for periods of the year. All I want is the higher canopy and a natural build up of leaf litter with small bulbs popping up in season.

Attractive in season but prickly and nondescript at other times

As I moved futher outwards to the sunny area again, I reached the chaenomeles and that is a bit of a challenge. Not only is it battling quite creditably with the competing growth, it seems to be attaining mammoth proportions. A mere two metres high, but it arches and layers over an area more than four metres long. I didn’t mention it is somewhat spiny and prickly, did I? It is just as well it has pretty flowers and very decorative fruit or it might have gone the way of other prickly plants – into the waiting mulcher.

3 thoughts on “No bletting the chaenomeles in our climate”