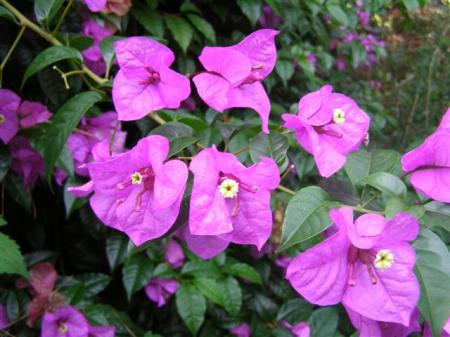 Decidedly rampant, extremely spiny but quite spectacular - the bougainvillea

Not, as we assumed, originating in the Bougainville Islands, but named for the French explorer, Louis Antoine de Bougainville and hailing from South America. We think this form is glabra, from Brazil. There is nothing rare about these scrambling climbers and they are appreciated throughout the temperate and tropical world for their display which can be all year round in latitudes close to the Equator. Here they peak in summer to autumn. It is not the insignificant flowers that make the show but the coloured bracts which surround the flowers and hang on for a long time. The colours range from the royal purple of this variety through cerise, red, pink, lilac, orange, gold and white. Left to their own devices , these can be formidable plants. Ours smothered a dead tree to around ten or fifteen metres high, and a little shy of that figure in both width and depth until the host tree rotted and fell over bringing down most of the bougainvillea with it. It then became a major mission because one of the other characteristics of this genus is its many sharp thorns.

Most of what are sold now are hybrids and they are not left to their own wayward habits as we have done. They are easy enough to trim and shape when small, sometimes trained as standards. We saw some really interested topiary specimens in Bali where three different colours had been grafted onto one stem and then trained to shape as a curious container plant. They are also recommended for hedging and with their thorny ways, they may be just the ticket to deter burglars in crime-prone areas with a mild climate.