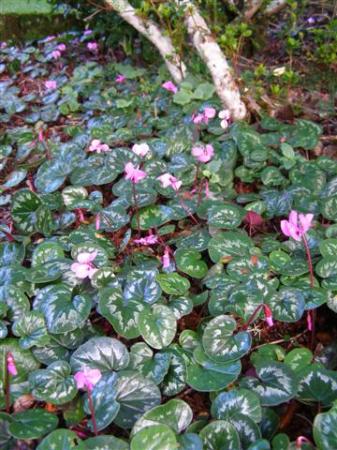 The charm on the winter flowering cyclamen

These winter flowering cyclamen are a delight and over the years we have increased their numbers so that we can use them to carpet beneath the light canopies of large evergreen azaleas (also coming in to flower now) and in open woodland areas. They have a remarkably long flowering season of months but don’t hold on to their foliage very long after flowering and their corms are quite small, so they discreetly disappear amongst the leaf litter when dormant.

Technically these go by the tongue twisting name of Cyclamen coum ssp caucasicum (the ssp stands for sub-species) and the caucasicums are a great deal more successful in our conditions than the straight coum. They hail from a wide area along the western edge of the Black Sea from Georgia southwards through Turkey to Northern Iran, including the Caucasus Ranges, where they can apparently be found growing from sea-level up to 2000 metres. It is the tolerance of sea level which means they will do with us where we don’t get an alpine chill. The Cyclamen Society (based in Britain) have been sending expeditions for years to try and establish the geographic distribution of the different forms of coum but the political instability of the area poses difficulties. The British have a wonderful history, second to none, of intrepid plant hunting and botanical research but they also have a healthy survival instinct. You won’t often see any forms of Cyclamen coum offered for sale, but if you know of somebody with some plants, they are easy to raise from fresh seed.