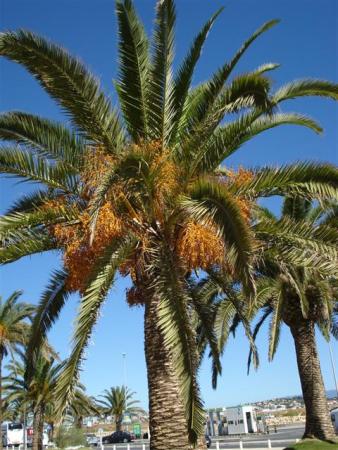 Even as September melts into October, Spain is hot and dry. Alas Professor Higgins had it entirely wrong when he made Eliza Doolittle recite that the rain in Spain falls mainly on the plain. He certainly was not referring to the plains beyond Madrid where the rain clearly falls on rare occasions at best. They are dry and arid, too inhospitable even for the hardy olive tree. Nearer the mountains (the sierras, but more hills than mountains by NZ standards), it is clear that more rain falls. There were olives as far as the eye could see. Don`t be imagining romantic old olive groves. This was monoculture on an industrial scale (viz a viz Blenheim vineyards). I had to ask about harvesting. It seemed incomprehensible that such vast acreages are still picked by hand but apparently that is the case. Teams of itinerant pickers, many of North African origin, travel the area at harvest time. I suspect I have seen the origin of all the imported olive oil on the shelves of every supermarket at home. Maybe.

The olives are usually planted in groups of three, each leaning outwards to grab its own space, and pruned to around 2.5 metres in height. Presumably this makes picking easier because the olive tree, left to its own devices, reaches higher. We are working to keep our one at home down to about 4 metres.

The olive plantations looked to be corporate farming, much as our dairy farming is headed. The era of the small family farm appeared to be over in much of the countryside that we passed through. Often there were no residences visible for considerable distances and no indications of boundaries to suggest the smaller holdings of old. It was interesting to reflect on the debate at home regarding lifestylers populating our countryside. We had been discussing it before I left and came to the conclusion that, on balance, small holdings and lifestyle blocks add a welcome diversity to the countryside. Without lifestylers planting gardens, shelter belts, home orchards and landscape trees, Taranaki could well become even more of the unrelieved green desert favoured by modern dairy farming methods. In the centre and south of Spain, it is not a green desert but red-brown dirt with multitudinous grey-green olive trees and not a lot else.

In urban areas, living is in high density housing, usually 3 to 5 stories high. I peered at balconies and roof terraces, looking for signs of green-fingered locals which is so evident in British high density housing. It is not here. I came to the conclusion that your average Spaniard does not nurture an irrepressible desire to grow plants and the G.I.Y. (that is: grow it yourself) and back to nature drive that is currently so strong in NZ, Australia and Britain is not to be seen. Any outdoor space is rare. The delightful inner courtyard or patio which has a debt to Moorish ancestors must be the preserve of the wealthy. A mere six, or maybe nine square metres of outdoor space is a privilege in many parts of urban Spain. But in a climate where temperatures can soar to 40 degrees (and stay there), a cool house is more desirable than al fresco living.

Were it not for the public plantings, this would be an even more austere environment. Fortunately, there has been a heavy investment in greening urban spaces in recent times. Not grass, which does not grow here unless irrigated. Ground surfaces are all paved but trees are being planted in abundance. Madrid has the harshest of climates – very hot and dry in summer and remarkably cold and dry in winter – so there is not a large plant palette to work with. The stately plane tree is the most dominant but it was interesting to see the number of Australian plants being used, most notably the good old gum or eucalyptus. 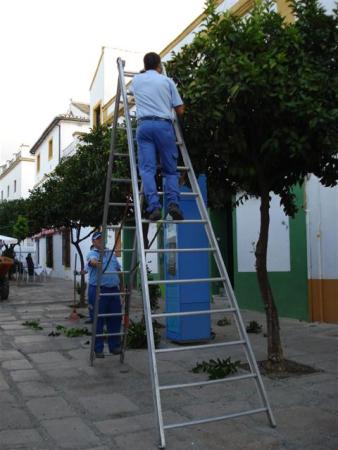 Clipping the street plantings of orange trees to lollipops in Cordoba

We just do not grow plane trees well at home in Taranaki (we are too wet and they are inclined to drop limbs too readily) so we don´t get to enjoy their wonderful bark. There does not appear to be any fear of large trees. The bigger the better for they provide welcome shade.

Cordoba has a milder climate and orange trees dominate as a street tree. Flowering time must be magical with the strong scent of orange blossom hanging in the air. I briefly indulged a fantasy of the entire local populace being able to gather tree-ripened oranges in season. After all, they have nowhere to grow their own. No. I was told that it is a bitter orange which is harvested commercially and shipped off to the jam factory!

By the time we reached Cadiz on the southern coast, it was the palm tree that prevailed. As far as I can work out, (and I freely own up to the sparsest knowledge of palms at best), it is almost exclusively the common date palm which Google tells me is Phoenix dactylifera. It is certainly a most handsome palm and remarkably tolerant of salt winds, growing even on the waterfronts. Mind you, it is so common that locals may well take a scathing attitude similar to Taranaki people with our adaptable pohutakawa.

Crossing to Portugal, it became clear that more rain falls. I even saw a little green grass with no evidence of irrigation. In Lagos where I write (prounced Lagoosh and not to be confused with Lagos in Nigeria), the date palms continue but the real delight is the large number of blue-as-blue jacaranda trees which continue to flower even as autumn starts. The New Zealand cabbage trees interplanted between the date palms by the river do not look such happy campers, alas.

Yuccas and oleanders flourish everywhere – both plant families which prefer drier conditions. But just to prove that bad taste crosses all borders, the new cultivar of oleander favoured in public plantings in Seville was a thoroughly nasty novelty selection – yellow and green variegated foliage with dirty pink flowers. I think we saw a new spirea sporting a similar colour scheme in the United Kingdom last year.

Tales of the gardens I have visited will have to wait until after I return. Yes there are gardens and the historical gardens of Andalucia are rooted in impossibly romantic Moorish architecture. At the time of writing, I have yet to see the famous gardens of Lisboa and Sintra in Portugal. I have contemplated an Outdoor Classroom on the DIY Moorish garden but the prospect scared me. The likelihood of achieving something unbelievably naff is greater than the likelihood of successfully adapting such a unique and culturally distant style to home!

1 thought on “A hot, dry autumn in Spain and Portugal”