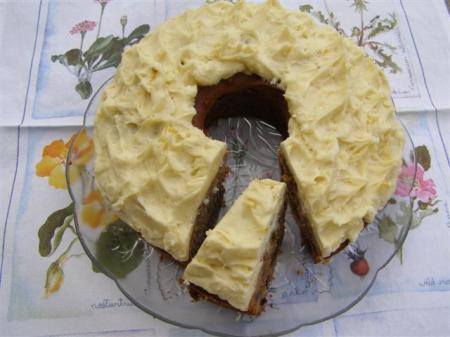 Somebody has already sampled the Moroccan date and spice cake

• It is here. We have counted down and opening day has arrived. It is too late to do anything but titivate for garden openers who will be out waiting to meet and greet visitors from this morning onwards. Local support is enormously important so I would urge readers to take a leaf from the bridal book and go and see one garden that you have been to previously and enjoyed, one garden that is new to you, one garden that you think may have some really good ideas for you to borrow and presumably one garden that has wisterias for the blue element! Maybe blue Siberian irises or ceanothus would do instead.

• We are a bit worried about potential weight gain here at Tikorangi this week. For the first time we are offering food for sale on Fridays, Saturdays and Sundays – courtesy of our neighbour Chris Sorensen. Now, we know from experience that her Greek lemon cake is almost divine (cooked with coconut and almond meal and drowned in lemon syrup and glaced lemon slices) and that her carrot and pineapple cake with pecans is a tour de force. It is a source of some chagrin to me that our Chris is a hugely more talented baker than I am but garden visitors will be the lucky ones to sample her offerings menu this week. The menu includes both hot and cold savouries as well but Mark and I have yet to conduct our quality control survey on these items.

• Near Manaia, Jenny Oakley has had cause to be grateful that they don’t get passers-by or casual evening visitors or she might feel embarrassed to be seen out at night with miner’s lamps strapped to her head as she waters her containers and hanging baskets and ties up her broad beans. The family gave her one as a joke Christmas present one year so that she could continue to garden after dark but they didn’t expect her to actually wear it! Experience has shown her that she needs to wear two at once in order to get enough light, which she says is not a very flattering look.

• In Stratford at Merleswood, Erica Jago has been glorying in some welcome sunshine recently which has her plants making up for the slow and cold start to spring. Being inland, Erica’s wisterias flower a little later than coastal gardens so peak during Festival and she has enormous and well trained specimens. Her Venusta, she says, must be at least 65 years old and is very striking with its strong lemon scent and big, fat, stubby, creamy white racemes. Various other cultivars in blues, lavenders and pink tones festoon their way around her garden. Erica’s rugosa rose hedge is bursting into bloom. The major work she undertook on this hedge over winter, which she says was arduous (syn. a cow of a job!) has paid off with a much better display this year.

• The call is out for anybody interested in opening their garden for the 2011 Festival to contact festival manager (Lisa Haskell) at TAFT on 06 759 8412. While it is undeniably a lot of work to prepare one’s garden, the pleasures and rewards of opening outweigh the labours. It is really affirming to have many hundreds, sometimes thousands, of people come and enjoy your garden and tell you how wonderful it is, though some of us might hide a wry smile at suggestions that we are lucky to live in such a beautiful place. There is not a lot of luck involved.

• Events this weekend include the inimitable Lynda Hallinan (From Chelsea to Chooks – how to be self sufficient in style), floral artist and micro-greens devotee Fionna Hill and our very own Jenny Oakley giving a workshop on hanging baskets. There is, as many of us have found out, a little more to good hanging baskets than plonking in some potting mix and a few pansies. Events kick off this evening with jazz and wine at our garden here at Tikorangi where we are slightly nervous about the number of tickets sold – divide by two and it gives an estimate of the number of cars to expect. Where will we park them?

• And a final word on etiquette for garden visitors although the source wishes to remain anonymous. Even with the best intentions, saying to a garden owner: “I guess the garden looks after itself these days,” is not a compliment. Gardens by definition do not look after themselves (native reserves and national parks do that). Gardens need a lot of looking after and that relaxed and natural look, which has a debt to the English romantic tradition of gardening, takes work.