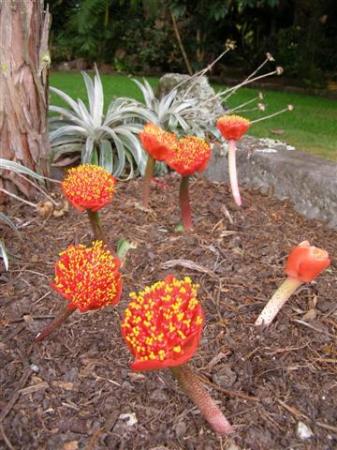 There is nothing particularly rare about Haemanthus coccineus, though if you want a plant, buy it without hesitation when you see it offered for sale. It is one of those oddities which are difficult to source in these days of streamlined plant production and an ever shrinking range. Most readers will know it better from its foliage – typically each bulb puts up two enormous, fleshy leaves which lie flat to the ground throughout winter, resembling elephant’s ears – which is indeed a common name for this plant. Unfortunately, both the young leaves and the flowers can be magnets for slugs and snails so it pays to be vigilant. The red paintbrush flowers on spotted stems which have popped up in the last few days are striking but fairly short-lived. This is a summer dormant bulb from South Africa and the flowering this week will have been triggered by the rains 10 days ago.

The bulbs are enormous fist-sized affairs. If you have a patch which is ready for dividing, you could do it immediately because, as with belladonnas, the plant flowers before it comes into new growth. Otherwise, leave it until the foliage dies off in late spring. Unlike some bulbs, haemanthus roots never die off completely so you have to lift carefully and replant immediately without letting the bulbs dry out. Plants may need some protection from heavy frosts and they don’t want to be in heavy, wet soils.

Haemanthus are another member of the amaryllis family (amaryllidaceae, to be precise) which gives us the showy flowers of belladonnas, crinums and last week’s worsleya, amongst others. Haemanthus albifloss is the reasonably common white flowered form which is largely evergreen but unless we had poor forms of it, it wasn’t much chop as a garden plant and is a mere shadow of its showier cousin, H. coccineus.

As a postscript to the worsleya last week: one kind reader in New Plymouth had a plant blooming and replied to my request. We swapped pollen and can hope for some viable seed.