First printed in the Weekend Gardener issue 322 and reproduced here with their permission. 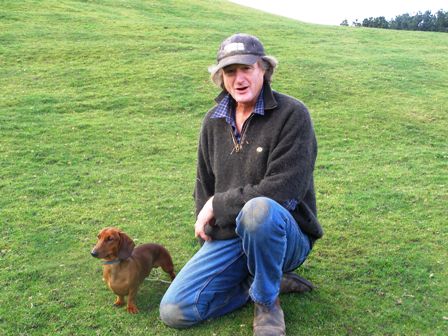 Over the years, Clive and Nicki Higgie have amassed one of this country’s foremost collections of plants and turned them into a remarkable garden at Fordell, near Wanganui. With his farming background, Clive is both practical and innovative and enjoys turning his hand to both construction and sculptural installations for the garden. He is not afraid to mix and match different styles and the results can be both surprising and original.

Some of Clive’s work is edgy, even flamboyant, and pushes boundaries in unexpected ways. A plain board fence at the entrance has been transformed into a statement by using witty wall writing – it is rather too whimsical and well executed to be described as graffiti.

The seating deck built out over the large pond area is also a little edgy. There is something a little insecure about sitting in such an exposed position even if the water is shallow. Clive says he made a few design mistakes on this small platform, particularly making it so low that leaves accumulate below the deck. Clive also constructs the seats. He calls them his Barebum Chairs, which I originally misread as Ba-ree/-bum.

The boathouse is a work in progress. Showing typical ingenuity, Clive has used a concrete water tank as foundations for the structure. The roof is made from fibreglass matting coated with acrylic while the balls are ceramic.

The Iona Cross is distinctly monumental construction made by Clive, standing nearly two and a half metres tall. It is concrete and was poured flat before being moved to its location. By contrast, the Polynesian influenced vertical panel was boxed up and poured in its final location. These are just two of a series of installations surrounding his earth labyrinth which reference the ancestry of Clive and Nicki’s first grandchild.

Clive is pleased with his recent constructions of simple concrete plinths. “I add a bit of oxide to colour the concrete and to stop it being that glaring white of fresh concrete. I really like the plinths. Sometimes a small vase or sculpture can get lost in a garden setting but the plinths make them stand out.”

The ribbed pillars have a clear debt to ancient times but have been created using labour saving modern techniques. The mould was simply a product called baby iron (small profile corrugated iron) bent in a circle and filled with concrete. These have reinforcing rods down the centre and are boxed up and poured in their final location.

Elsewhere in the garden, Clive has made extensive use of pillars constructed from terracotta field tiles. He first saw the technique used at Tupare in New Plymouth. He explains: “The pipes are irregular so I mortared them together before filling them with concrete. The mortar joins give structural strength. They didn’t do that at Tupare and many of their pipes had cracked and split.”

Not all construction is in concrete. Clive used ponga longs of irregular shapes and sizes to build a simple stumpery installation. The pongas vary from waist height to around 3 metres.

In his new Garden of Death, his friend, sculptor Steuart Welch, made the hanging crucibles which he calls Dracula pots. Clive has filled them with bleached animal skulls to complement the theme of the garden which is based around the social history of poisonous plants. 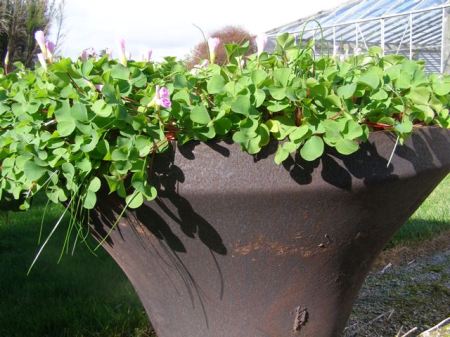 The attractive large planters came from a quarry stone crusher and, originally, the smooth sided bowl fitted inside the ribbed one, breaking large stones down to form road gravel. Being magnesium steel, they were of no scrap value but now contain large plantings of ornamental oxalis.

Clive is pleased with his simple solution for the side gate leading from the lower garden to the Matchless Arboretum. Because sheep graze beneath the trees, it is important that the gate be kept closed. A simple system of a counterweight pulls it shut behind visitors.

Paloma Gardens are open to the public all year round. For further information, check out their website: http://www.paloma.co.nz, email clive.nicki@paloma.co.nz or phone 06 342 7857 For my earlier story on Paloma, check Breaking the Mould of the Modern New Zealand Garden – the Dreams at Paloma.