Ah, the romance of picture book chookies in your back yard

The Good Life has come to Havelock North, but it has been renamed Green Urban Living and it is all absolutely simple and easy to manage, requiring very little time. That is according to author, Janet Luke, who has written a book of encyclopaedic spread (but not encyclopaedic detail) based on her own personal experience. The book is backed up by 32 You Tube clips and many website references.

Topics covered include setting up a green urban garden, compost, sustainable water use, growing vegetables, fruit, herbs, flowers (an eclectic mix ranging from paeonies to sunflowers to globe thistles), keeping chickens, beekeeping, worm farms, gardening with kids – all peppered with Top Tips, recipes, and hints. Plus photos – all in 172 pages. It is a very busy book.

On the positive side, the author is passionate about her topic and comes to it from practical and personal experience. If you are into the new age, trendy urban living which wants to be green but is not too purist, then you may well find the enthusiasm and simplified advice in this book is a wonderful motivator. I looked at some of the You Tube clips and there is an engaging naivety and brevity about them. Janet Luke has worked extremely hard to put together a comprehensive but user-friendly package.

If you are a crusty, hardened old cynic who has been through all this (going green is hardly a new concept – many of us chose that way back in the mists of the post Woodstock era of the 1970s), then the newfound zeal, sweeping statements and sometimes very woolly thinking of the latest converts can seem a little like reinventing the wheel.

Green? Hmm. I don’t see buying grow bags filled with potting mix as being green. Nor do I think wheeling your barrow around your neighbourhood as soon as you hear a lawnmower start up is particularly green. For starters, you have no idea what chemicals your neighbours may have used on their lawns (some lawn clippings are too toxic to use in a compost heap). Added to that, you are taking away their organic material to your site – which hardly follows permaculture principles. 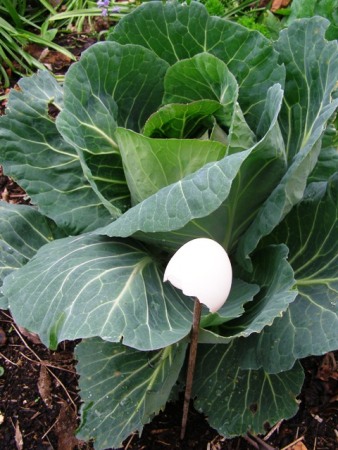 Do we really believe that cabbage whites have large enough brains to be duped?

We are deeply suspicious of the claim that white butterflies are territorial. The current received wisdom is that you can deter incoming cabbage whites by putting half eggshells on sticks amongst your brassicas, fooling them into thinking that another cabbage white is already in residence. This is not the first time I have seen this claim so I did a quick Google search to see if I could find a credible source to confirm it. The key word here is credible. I failed. We are storing our eggshells and when the first cabbage whites of the season show up here, Mark will be out testing this theory. Having observed clouds of cabbage whites on crops such as swedes, we lean to the view that this piece of advice is more wishful thinking than actual fact.

But it is not doubt that we feel regarding the claims that commercial corn is mostly genetically modified and controlled by the terminator gene so it makes sense to keep to heirloom varieties. The author clearly has not got to grips with the differences between F1 hybrids, line breeding, selection, genetic modification and the terminator gene. And seed companies in NZ like Kings and Yates might be a little annoyed to see the suggestion that their product is GM. Internationally, many commercial crops of maize have undergone genetic modification (in which case, it can equally be argued that the dreaded terminator gene is a good thing because it will stop the escape of some GM material into the wider environment), but what is sold in this country, certainly for home gardeners, is not GM. It is either the result of controlled crosses (which is an F1 hybrid) or of line breeding (selecting out the best performing cobs and continuing with them). That is what has brought us the new generation, sweet and tender corn that we all expect now. By all means go back to the heirloom varieties if you wish. Just don’t expect to be eating the tender and super sweet product because those old varieties are tougher and starchier and more akin to maize. Sweetcorn has improved in taste and texture in recent times, which cannot be said of all vegetables.

The retired beekeeper we had staying last week was critical of the chapter on beekeeping. He was surprised to find that top-bar hives, as promoted by the author with near religious zeal, are even legal in this country and he pointed out numerous reasons why they are inferior to the Langstroth hive. Of course Langstroths don’t look cute. He also felt that, given the author’s brief experience of beekeeping, she has been very lucky so far and she makes it look too easy altogether. I just thought that the advice that you could have your beehive on an apartment balcony or the shed roof came more from the Do As I Say school of advice, rather than the Do As I Do school. How on earth are you going to monitor and look after your hive if it is on a shed roof? That said, it is interspersed with some sound advice with regard to legal requirements and she recommends you join a local beekeeping club. I could not understand, either, why apartment dwellers would want to have a worm farm on their balcony. Move to ground level, I say.

It is great to see interest in topics related to sustainability, reducing one’s carbon footprint and organics. I would just prefer to see a little more rigour along with the joyous fervour.

10 thoughts on “The latest take on living sustainably”