I fear my scatter cushions are more of the shabby chic genre than designer...

I attended a really interesting garden lecture on Saturday. Some readers may know Neil Ross from his regular contributions to the NZ Gardener magazine. He spent some years as head gardener at Ayrlies in Auckland but these days is back gardening, designing and writing in the UK. His talk was loosely on gardening trends in Britain and I thought readers might enjoy a summary of what is going out of fashion and what is on the rise, based in part on his analysis of the cutting edge garden installations by leading designers at Britain’s superb garden shows – Chelsea, Tatton Park, Hampton Court and the like.

Passing over (so they will look dated very soon in your garden, should you be contemplating them) are painted walls – usually solid plastered walls installed as a garden feature and painted in a dramatic shade with colour toned plantings. Sorry, passé now, along with gabions, thank goodness. The latter are wire cages, usually filled with rocks but sometimes with au naturelle branches and trunks cut to length or even pine cones. We always thought that gabions looked better when used for their original purpose of slowing erosion. They are a bit too industrial altogether in a garden.

Dribbly water features that look like urinals (Neil’s description, not mine) are looking dated, irrespective of whether that trickle of water is flowing out of a terracotta head, a gargoyle of any description or just a modest pipe. Keep to ponds (lakes are better), natural streams or at least a decent gush of water if you feel the need for a water feature.

Box balls, Neil reports, have been so over-used as a formal feature that they have been done to death. Though he thought, in New Zealand it is not just buxus balls. It is the whole mini-Sissinghurst look of clipped buxus hedges and edges containing formal standard plants (be they roses, bay trees or choisya ternata) – a man after my own heart on this issue. Also done to death are designer scatter cushions accessorizing the display garden. I have to admit that I have been known to employ the scatter cushion on our rather unforgiving stone seats though mine are of the shabby chic genre (all my late mother’s tapestry, now heavily faded) rather than designer colours and textures. I only put them out when our garden is open and I went off that idea the time I forgot to bring them in and it rained…. 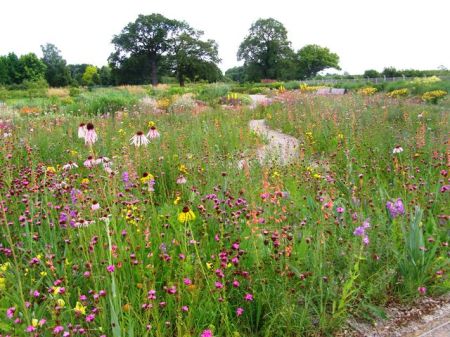 The prairie garden is in danger of becoming yesterday’s design in England though we have never embraced this style in New Zealand. The Missouri Meadow at the RHS flagship garden, Wisley, south of London, is the finest example we have seen. But it relies on low rainfall and low fertility which hardly describes the dairy farming areas of New Zealand so we may never see prairie plantings popularised here.

If you want to be cutting edge, Neil’s advice is that the new trend is to keep chickens and indeed anything that is edible or food producing in the garden. I don’t think guinea pigs count. Beehives are all the rage, especially in cutsie-pie bee frames. Insect hotels are all the rage in English gardens though the research is that insects are happier in a natural environment (leave an old log to rot down) than in your designer Hilton.

Green walls are still a hot item but we agreed that they are expensive to install and a lot of work to maintain. It is easier to grow plants in the ground rather than in vertical frames, if you can.

Glass is in fashion, preferably exquisite, hand-blown glass features. At a pinch wine bottles might fit the bill in a creative wall construction which may suit the winos amongst us. But the suggestion I have seen to use old wine bottles as a garden edging is a really bad idea from a practical point of view, let alone the dodgy aesthetics. As you plunge your spade in to turn over the soil, you are just as likely to hit a bottle and break it.

Predicting the Return of the Conifer

And conifers are due to make a return. Not in a reincarnation of the awful 1970s style some readers may recall – a mass of prostrate junipers and the like plonked in through black plastic and then covered with that nasty red scoria. There were good reasons why that particular style of gardening fell from grace but the poor old conifers themselves did not deserve to be cast out to the wilderness along with the garden style. The conifer family is huge and there are many fine specimens from tiny treasures to handsome, long-lived landscape specimens. Used judiciously as accent plants throughout the garden, they can give a splendid year round shape and definition as well as variations in colour. Thank goodness we still have ours – after sixty years, some are getting venerable and we would not be without them.

In place of prairies and meadows, more block planting of perennials is returning – check out the work of Tom Stuart Smith or Piet Oudolf.

The final caution comes not from Neil but from the Garden of Jury – beware of rills and obelisks. They are on the cusp of passing from innovative to hackneyed. It is a very short step.