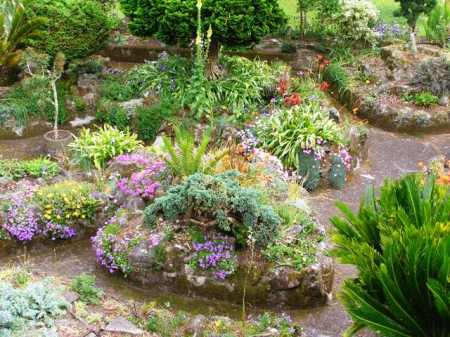 Ours is not a rockery for growing alpines

My mission to weed our stream and ponds, about which I wrote last week, has been subsumed. That is to say it has largely been taken over by the menfolk in my life and turned into something much larger but I am not complaining. I was trying to clear the water weed. They are now building an additional weir, flushing the stream and hiring a sludge pump to clear the ponds. I know my limits. I have moved up from the park and into the rockery.

Moving from the open areas to the intimacy of the rockery is going from one extreme to another. The former is big picture gardening and much concerned with giving large trees space to grow and anchoring the whole picture well into the surrounding environs. This used to be called borrowed views and vistas before those terms became so pretentious they fell into naffdom. The rockery is all about little pictures, highly detailed gardening. I wouldn’t be without either, but I really enjoy the attention the rockery requires.

Traditionally, rockeries were about creating an environment that resembled scree slopes of mountains in order to grow alpines. We cannot grow alpines. We’ve tried but it doesn’t work. Our high humidity, high rainfall and mild year-round temperatures conspire against alpines. For us the rockery has become the place to keep track of treasures and to confine dangerous but attractive bulbs. Most gardeners know how easy it is to lose bulbs in garden borders. Some get swamped out by neighbouring plants, some are so anonymous when dormant that they get pulled out with other plants, some just seem to go, we know not where. If they have their own pocket in the rockery, it is possible to label their location and restrict competition.

Rockery conditions are surprisingly harsh. All that stone and other hard material heats up in summer so the soil dries out quickly. The gentle, steady rain we had last week didn’t penetrate very far. This means you have to be pretty selective about small shrubs, perennials and other plants but the bulbs don’t usually mind. In the wild, most are used to marginal conditions.

Two summers ago, I took the rockery apart pocket by pocket. At the time, I estimated there were about 500 separate compartments and it took me a full month’s work. At least I got to know it and all its inhabitants. This time I am only concentrating on the messy bits and the areas where plants responded a little too enthusiastically to the earlier renovation. The combination of black mondo grass and pink Cyclamen hederafolium is very pretty, especially as snowdrops come through the marbled foliage of the cyclamen in the depths of winter. But you can have too much of a good thing and all three inhabitants were trying to outcompete each other. I am thinning them drastically.

To garden in this style, you have to be willing to tolerate the messy season bulbs have, when their foliage is looking past its best. Most bulbs use the time after flowering to build strength below ground so they can flower again next year. When they have done that, their foliage dies down naturally. With some, this is a quick turnaround. Others, like nerines and colchicums, take many months. We just try and ensure that other areas of the rockery have more attractive displays to distract the viewer and leave the plants to their natural cycle.

I used to think that every pocket of the rockery should have something of interest in it all the time. This is actually a lot harder than it sounds because you then need to use a succession of maybe four different plants which can co-exist quite happily – and each compartment should have different combinations. In other words, for me this would be getting on for 500 miniature gardens. Rockeries are no place for mass planting. I flagged that idea – too hard and not necessary. Some compartments will have periods of the year when they appear empty and that is fine as long as there are no weeds. There is no place for any weeds at all in this intensive style of gardening.

Ours is an aged example – sixty years to be precise. We have some fine, gnarly, old, characterful dwarf conifers to give year round structure along with some smaller growing cycads (though somebody forgot to tell the handsome Cycas revoluta to stop growing). We have a few easy care, small perennials to soften the edges. A compact little blue campanula is one of the best of these along with a well behaved little scutellaria. We like the tall punctuation marks of some plants drifted through the rockery. The upright orange-toned orchid, Satyrium coriifolium, is the choicest one. The large flowered yellow Verbascum creticum seeds down gently to give the statement in late spring and the amaranthus (Love Lies Bleeding), similarly self seeded, is growing before our very eyes to fill the vertical accent role in autumn. These plants just provide a framework for the real stars – a succession of any and all interesting bulbs we can grow.

It means there is always something of interest to look at. I enjoy that sort of detailed gardening.