We were entranced by the Piet Oudolf borders at Wisley

Years ago I was editing garden descriptions and amongst the plethora of developing gardens or tranquil havens filled with birdsong, I came across one which claimed to have “a fascinating collection of grasses.” Fascinating seemed to be overstating the case. I think I toned down the adjective. It has taken a long time to win us over to the merits of grasses here, even though we have some lovely native varieties in New Zealand. 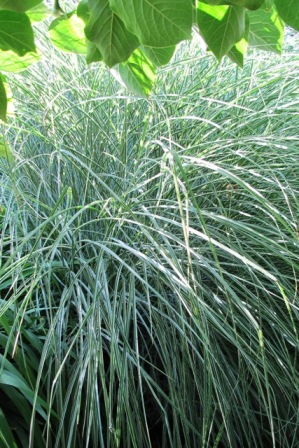 I have never actually seen grasses used in a breathtakingly beautiful way in gardens in this country though I have seen some handsome amenity planting combinations. The problem lies, I think, in how we use them. For starters we tend to limit ourselves to varieties which are knee high or lower. Even worse is the habit of forcing innocent grasses into an edging role where they are destined forever to be like an untidy fringe. And yes, mondo grass (both black and green), liriope, Carex Frosted Curls and blue fescue – I’m looking at you here. Grasses by their very form are designed to grow in the round, not to be forced into a narrow row as an edger. Nor indeed do I understand the obsession with uniform edging plants on all garden beds and borders in this country but that is another matter.

It wasn’t until we went to look at summer gardens in the UK that we were won over by grasses. We had heard slightly disparaging comments about the Piet Oudolf twin borders at Wisley (the RHS flaghip gardens) – a chevron design in grasses, I think somebody told us sniffily. It wasn’t that at all. Twin parallel borders were united by rivers of colour and texture flowing from one to the other with grasses featuring along with other plantings. Not knee high grasses, these were at least waist high and integrated with other carefully chosen perennials. It was an inspirational planting.

On the same trip, I saw the most exquisite grass I have ever seen at Beth Chatto’s garden. I don’t even know if Stipa barbata is in this country but it was light, ethereal and remarkably beautiful. Since then, we’ve seen grasses featured frequently in British TV garden programmes. One of the reasons we subscribe to Sky is to get gardening shows on the Living Channel. 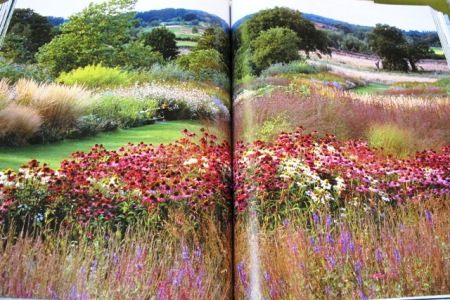 The common threads to making these plantings work are:
1) Inspired combinations. Grasses are not planted with other grasses. They are integrated into mixed plantings which are carefully managed to look naturalistic in style. Grasses don’t generally suit formal plantings.
2) Forget grasses which are ankle high to knee high. Statement clumps are at least waist high and often considerably taller. This of course means they need quite a bit of space.
3) Big grasses plus big plantings result in a big effect. It rarely scales down effectively. Therein lies the problem – not that many of us have the space to garden on this sort of scale. Those of us who do have space (and it needs to be sunny, well drained space), have usually cluttered it up with mixed plantings including trees and shrubs. These exciting perennial plantings using grasses are usually only perennials, not mixed borders. The aforementioned Oudolf borders at Wisley are around 150 metres long by 11 metres wide – each. While that is on a grand and public scale, you really can’t expect to replicate it in miniature in a border which is only a metre wide and three metres long.
4) Many of these successful plantings have their origins in a garden interpretation of American prairies. It is a managed but not manicured style of gardening. It is some distance away from the classic herbaceous border and it is a long way away from the formal garden rooms genre we have adopted so enthusiastically in this country. It does not combine well with clipped hedges.

Set the grasses free. That is not original. I read it somewhere and it was a NZ writer though I can’t recall who. Stop trying to straitjacket them into contrived and managed combinations. If you have your grasses in a situation where they require grooming and regular combing, it is likely that you are straitjacketing them.

We were told that the Oudolf borders we so admired at Wisley required only a third of the labour input that the classic herbaceous borders needed. Partly that is because they don’t need staking or deadheading. They are cut down in late January (for us that translates to the end of July or late winter). I imagine by that stage they are quite scruffy so it is not a style that will appeal to tidy gardeners. But despite that scruffy stage, these prairie styled plantings contribute a great deal to the ecology of an area, feeding birds and wildlife. It is different to wildflower meadows in that it is managed plantings in varied combinations, often within a somewhat formal layout and with tight weed management. It is not random or self sown. This is not a style we seem to have picked up on this country. We are still mulling around as to whether we have the right position to try.

1 thought on “Gardening with grasses”