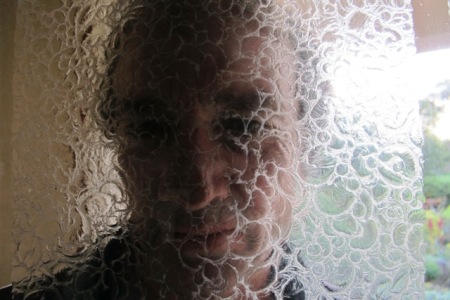 Mark, nose pressed to the window (or door, in this case). On the outside looking in.

Hamilton is playing host to some good gardeners this weekend. It is the New Zealand Gardens Trust (NZGT) having its annual conference in the city. This is the parent organisation of many, but not all, open gardens in this country. We are not attending. We were enthusiastic founder members. Indeed, we even contributed $2000 to get the thing up and running. There is nothing like resigning on principle and being totally ignored to remind one not to get ideas above one’s station.

The purpose of the trust is to vet gardens, rank them and give garden visitors an accurate idea of what to expect. Along the way, it aims to provide a pleasant membership club of collegial conviviality for the garden openers and this is really the only aspect we miss.

There aren’t many circumstances where garden assessment is required. There is the occasional local competition which invariably gives lie to the idea that gardening is a non competitive activity – for some at least. There are plenty of people who would like to claim the biggest pumpkin, tallest sunflower, prettiest road frontage, or the best vegetable or flower garden. Winning can be wonderfully affirming.

Some of the garden festivals around the country insist on vetting gardens before accepting them. In this case, assessment is only setting the base line for inclusion. It can be alarmingly controversial but anybody with experience knows just how necessary the process is. Too many gardeners wear rose tinted glasses where their own patch of dirt is concerned.

Show gardens such as seen at the Ellerslie Flower Show are judged and there are some excellent international precedents for how these are assessed, emanating particularly from Britain’s Royal Horticultural Society. Interestingly, the RHS is taking a close look at its assessment processes right now.

And there is our national scheme for ranking gardens, administered by the aforementioned NZGT. Of course you can still open your garden independently, as we do these days, but from the point of view of the garden visitor, some credible outside endorsement and ranking can be helpful. Originally, this open garden scheme had three categories with the top tier being grandly named: Gardens of National Significance. We were really honoured to be named one of only six private gardens to carry this elevated status in the first year. That meant something. These days, with a huge number of gardens in the top categories, it doesn’t seem anywhere near as prestigious. Do we really have over sixty two top tier gardens, of national significance and a few even described with great puffery as being of INTERnational significance, in this country?

Equally, it seems really odd that the next tier of gardens down numbers a mere thirty six. One might expect a pyramid shape – fewer top gardens and a whole lot more in the next layer who would like to move up. Either the organisation is singularly bad at retaining membership below the top tiers, or it gives out its rankings way too cheaply.

The problem, I would suggest, is likely to stem from too heavy a dependence on a points based system. By that, I mean allocating so many points for the state of your lawns, your paved surfaces, how neatly your hedges are clipped, how you support and tie up plants, plant combinations, plant health and so on. It matters not a whit if you are scoring out of 10, 100 or 300.

In practice, slavish adherence to a points based system can mean a damned ordinary or downright awful garden lacking in any charm or originality can get through as long as it scores highly in sufficient categories. The sum of the parts is sometimes greater than the whole. We saw it happen a few years ago when someone with a good level of knowledge trotted around a number of local gardens, clipboard and marking schedule in hand. “When I got to the end,” he told us, “and added up the points, I was astonished at who came out with the highest score.” As indeed we were, too.

A marking schedule is just one tool, not an end in itself. Neither is it a shield to hide behind, to justify decisions. It needs to be used in conjunction with clear definitions, agreed frameworks, some bigger picture thinking about downstream outcomes, maybe a mediated process and preferably in the hands of a convenor. Done well, assessment can even be an empowering experience for the candidate.

I have no idea whether NZGT is now employing a wider range of strategies in assessment. They certainly didn’t in the past. From my current position out in the cold with my nose pressed up against the window pane, the current outcomes are not suggesting that there has been significant change.

Notwithstanding those reservations, one hopes that the keen and dedicated gardeners visiting Hamilton this weekend will encounter fine weather, wine and gardens to be enjoyed in convivial company.

Before becoming a garden writer, Abbie Jury spent 18 years working in education, across all sectors before specialising in adult learning. She was appointed to an advisory committee to the Minister of Education, to a standing committee of NZQA and was awarded a Commonwealth Relations Trust bursary to study alternative forms of assessment of adults in the UK.

Three years ago, I published the reasons for our resignation from the New Zealand Gardens Trust. Despite being widely read then and in the intervening years, those comments appear to have fallen into an abyss.

Eight years ago, I wrote in strong support of the NZGT. That does seem rather a long time ago now.