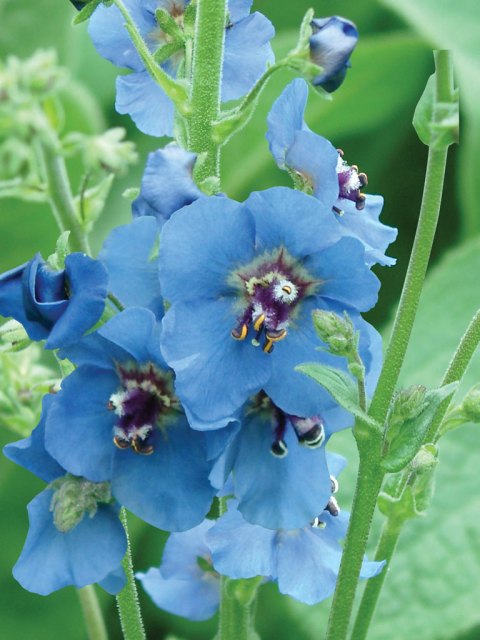 Latest posts: June 1, 2012
1) Astoundingly, a blue as blue verbascum. Currently only available in the UK, as far as I know, but we seriously covet it for our garden. Abbie’s column.
2) The last nerine for the season, N. bowdenii, standing up to late autumn with brazen pinkness.
3) Grow it yourself – a bay tree. It is easy.
4) And, nothing to do with gardening, but a slew of new reviews on http://runningfurs.com – children’s books this time (mostly picture books) with three really good ones amongst them.

After last week’s column about reviewing our mixed borders, I have been having such fun reworking some of the borders. But I think my concept (and practice) of unifying the underplantings is on a somewhat different page to that of the author, Anne Wareham, who motivated me in this direction. True, in one border, I drifted the blue corydalis, yellow polyanthus and blue lobelia, but also retained the Rodgersia aesculifolia and Mark’s showy arisaemea hybrids. I cast out the dreadful mondo grass which seems to inveigling its way in everywhere (compost heaps are so useful) and figured that the interesting Manfreda maculosa would be better being interesting somewhere else. Same with the burgundy eucomis and a few other plants. But I was always bound to fall off the simplifying wagon. It being the coldest border we have in the upper gardens, I simply could not resist trying some meconopsis (blue Himalayan poppies) to see if they would like the spot. Ditto, some Higo iris, because we are looking for the right conditions for these.

The proof of the pudding is in the eating. We will see how my border looks in the spring and then for the next two or three years. There is little dross left but I realise it is just not in my nature (nor, indeed, in Mark’s) to switch to simple, unified plantings. We just have to work harder at getting the combinations better and establishing different looks so they don’t all start to meld and look the same.