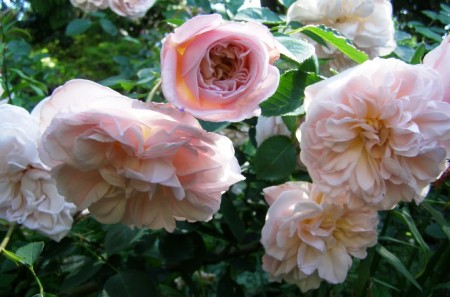 One size does not fit all with roses but there are some rules that apply to most rose types. Pruning stimulates growth so in colder areas, it is best left until later in August to avoid new growth getting frosted. In warmer areas, timing does not matter – from now on is fine.

1) Bushy roses with lots of fine, twiggy growth (some standard roses are of this type also) can be given the once over shear with hedge clippers. It doesn’t look the tidiest when the cut ends then die back to the nearest leaf bud, but once they come into leaf there is little visible difference and it is much faster.

2) For more careful pruning, cut out stems with dieback, seen here in the dark brown stems.

3) Cut out stems which show damage or cross and rub against each other, shown here in the two centre stems. The rubbing damages the bark and makes the plant more vulnerable to diseases getting in. Because roses do best with light and air movement, it is usually advisable to keep the middle of the plant open. Remove any spindly, weak stems. 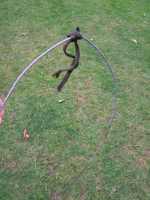 4) Some roses put on very long, whippy growths. Where space allows, arching these growths over and tying them down (I use hoops of wire and a soft tie) forces all the buds along the stem into growth and greatly increases the floral display. Similarly, tying a climbing rose to a horizontal line, encourages that stem to flower all the way along rather than just on top. 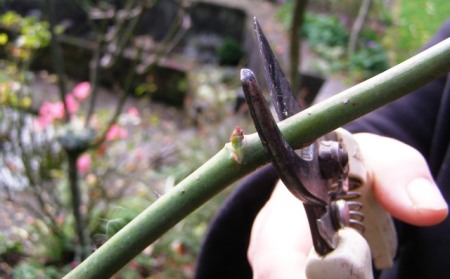 5) Shorten the remaining stems back to a leaf bud (if you leave too much past the bud, it will die back to that level anyway) and pick a leaf bud on the outside of the stem. This is because the new shoots will follow that direction and you want them growing away from the plant and not crisscrossing the middle. Angling the cut away from the bud encourages the water to run off. Make sure your secateurs are sharp and cut cleanly, not crushing the stem.

6) All advice is to use a copper spray after pruning to help fight fungal diseases. We have yet to do this (we don’t spray our roses at all) but the advice comes consistently from those who know more about roses. It will also help reduce the build-up of lichens and mosses on the stems and the base. Copper hydroxide is different to copper oxychloride so follow the application rates on the packet and do it at winter strength.