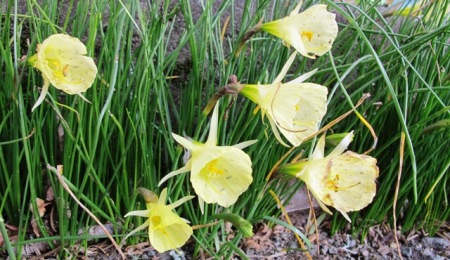 The first narcissus of the season – N. bulbocodium citrinus ‘Pandora’

Always the first little narcissi to flower in winter, these lemon hoop petticoats are pretty as a picture at the moment. I guess they gained their common name because they resemble those wired underskirts from times past. The bright yellow bulbocodiums flower later in the season. In contrast, the citrinus are very early, coming out with the snowdrops. These are easy bulbs to grow. In fact this clump is naturalised in hard conditions where our gravel driveway meets an elevated concrete path – which is why the flowers show some splash and wear. There is no mollycoddling involved with them but they do need good drainage and full sun. N. bulbocodium is native to the south of France, Portugal and Spain so will occur naturally in relatively hard conditions. Given that the foliage is distinctly grassy in appearance, you just need to make sure you are not mowing it off in the early stages.

Daffodils go far beyond the common big King Alfred types and we like a range of them so we can have them in flower for many months. We prefer earlier flowering ones overall because they are generally finished by the time the dreaded narcissi fly is on the wing. It lays its eggs in the crown of the foliage and each bulb becomes home to one fly larvae (big, fat creamy grub) which spends a year sustaining itself by eating the bulb from the inside out, only to metamorphose and repeat the cycle. A breeder told me that narcissi only need 65 days of growth to build up strength in the bulb for next year’s flowering so you can remove foliage early if you need to beat the fly. We also favour the littlies, the dwarf varieties, which are much more compact and showy in the garden.

Bulbocodiums increase readily by division and some will set viable seed.