A simple but very pleasing combination of Helleborus niger for winter flowers, Calanthe arisarnensis for spring, some random dwarf narcissi – and interesting foliage all summer

Last week, I wrote about the major makeover in the rose garden and mentioned the fun I was having with the perennials. While the rains have interrupted progress (it is difficult to dig and divide in waterlogged conditions), we have spent a great deal of time discussing perennials and their use here. Indeed, we even dedicated a gardening trip to the UK to look at techniques.

Traditionally, English perennial gardening has been dominated by the herbaceous border organised on what I had been calling the mix and match approach but which I have just seen described as tapestry gardening. And that seems appropriate – it is like building up an entire picture but from a multitude of different plants instead of coloured threads. At its best, it is magnificent but it is also very labour intensive and takes a lot of skill to put together well. Too often both the ongoing labour and the skill levels are lacking and it just looks a mess.

In the nineties when we saw the gardening scene hijacked by the landscape fraternity in this country, that sort of detailed gardening was thrown out. “The Look” became the dominant feature. Gone was tapestry gardening and any value placed on plantsmanship or plant detail. Now perennial gardening became “underplanting” and just as patterned carpets have been shunned in favour of the same plain carpet throughout the entire house, so too was underplanting to be a utility carpet, usually comprising only one plant variety. So rose gardens were carpeted with nepeta (catmint), or maybe stachys (lamb’s ear). Liriope was fine as long as it was en masse, or any other utility perennial that could form a reliable carpet. It is an approach to gardening that we have shunned as deathly dull.

Piet Oudolf’s rivers of perennials at Wisley were a revelation to us. Here was a contemporary take on perennial planting on a large scale. Each river or stripe is composed of three or four different plants, often repeated in other combinations elsewhere in the border. Tom Stuart-Smith’s plantings in the same RHS garden were a reinterpretation of the type of block planting first espoused by Gertrude Jekyll, especially with her later work when her eyesight was failing and she needed more defined form. When I use the word “blocky”, we are talking more freeform shapes than geometric, more Braque than Mondrian.

The upshot of this thinking was that when Neil Ross suggested I look to reorganising the perennial plantings in our rose garden to more contemporary blocky plantings with simple combinations, I had a mental framework to fit it into. While the area is hard landscaped into a formal design, I didn’t want formal geometric plantings. We strive for a spring and summer froth of pretties – roses and perennials – with touches of plant interest to extend the seasons into autumn and winter. So my blocks are random but nothing less than a square metre and nothing more than three square metres. And each block has three, sometimes four different plants in it. The fun has been in deciding the combinations block by block. It is a bit like creating a multitude of mini gardens and linking them together.

I have bought no new plants. All I have done is to lift, divide and recompose what I had in the garden. So they are just arranged differently. In each block, I have tried to combine plants which I think will be compatible in close company with each other – in other words nothing that is going to overwhelm its companions above ground by smothering them or underground by over-competing. I have considered the time of the season that each plant peaks to try and cover a good span of the year and also to get interesting combinations of foliage and flowers within each block. 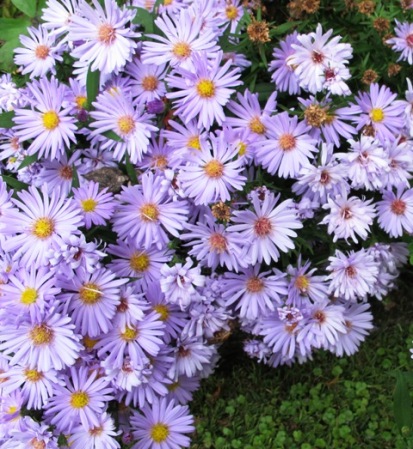 A carpet of blue asters in late summer and autumn

Nothing is more boring than endless plant lists so I will just give a couple of examples. One block is the common liriope (grassy foliage and blue flowers in summer) with a taller, pure white Siberian iris (for spring flowers) and one of the strong growing, mat-forming Kippenberg asters with lovely blue daisy flowers in autumn. Elsewhere, I have another block which repeats the white iris but this time combining it with a compact bright blue campanula and a little pure white scuttelaria which flowers most of the time.

If one block doesn’t work, then it will be easy to address the problems in that section. Some will need lifting and dividing more often than others. The whole area has been dug over thoroughly so the plants are in friable and fluffy soil which most perennials appreciate and I have laid a mulch of compost on top. These are optimal conditions and, while the area is very new right now, I have planted divisions and plants close together so I expect rapid results as soil temperatures rise in spring. If it doesn’t close up and fill the beds with a riotous froth in time for our peak garden visitor season, I may have to be in there with emergency plugging of gaps but I hope that is not going to be required. I am also expecting that the self seeded annuals will also come away quickly and fill gaps. The pretty nigella (love in a mist), linaria pink and lilac, blue poelmonium (Jacob’s Ladder) and common old blue pansies are all welcome to stage a return wherever they wish, to soften the divisions between the blocks.

Now it is just a question of waiting to see the results.