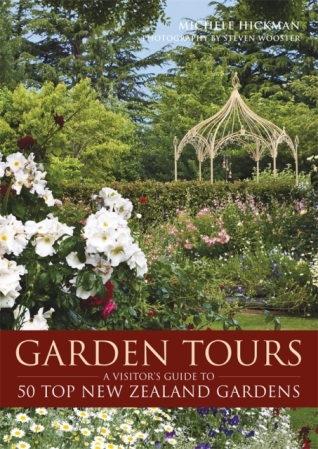 The first thing I did on receiving what claims to be a garden visitor guide was to look at the contents to see who was included. There were some… ‘interesting’ inclusions and indeed exclusions. The entire east coast from Hawkes Bay to Poverty Bay has been bypassed.

The second thing I noticed is that a number of the public gardens got to write their own text which seemed an interesting authorial and editorial decision in what purports to be a guidebook – ergo independent.

Five minutes. It took just five minutes of dipping in to the book to realise that at times the author was writing about places she had not visited. I phoned a few friends whose gardens are included and they confirmed that she had never been there, a point not disputed by the publisher when queried. She carried out interviews by long distance phone calls and email from her UK base. No matter how hard you try (and the author has worked hard on this book) you can only tell so much from photographs and it was her failure to get to grips with matters of scale and proportion that alerted me to the fact she had only ever seen photos of some of the gardens at least.

In fact if you read the intro, the starting point for the book was the photo library of UK photographer, Steven Wooster. The author also makes the telling comment: “…each (garden owner) has approved the text written about their garden”. So much for independent commentary, then. It is still a mystery to me how she can write over 2000 words (10 pages including photos) on some gardens which I suspect she may never have seen in person. Others are much briefer – presumably the owners were less forthcoming on the phone.

So, had we been approached to have our garden included in this book, how would we have responded, knowing that the author had never visited? We would probably have agreed. What is not to like about free publicity written with the appearance of great authority when you even get to approve the text before publication?

The photographs are patchy. Some are lovely. Too many are not, where the light and shade are all wrong and the shadows too deep. Some of the selections fail to give a full picture of the garden and some fail to connect with the text – a problem which results from using existing photos as the starting point. I recognised some photos from earlier use in other publications.

The bottom line is that this book should have been called: “Fifty NZ Gardens I Have Visited” by Steven Wooster (he at least did visit all of them) with Michele Hickman. To publish it as a visitor guide is outrageous. Would you expect to buy a guide to 50 top restaurants where the author had not visited them all but had written the text and had it approved by the restaurant proprietors? Of course you wouldn’t. The same goes for 50 Top Wines or 50 Top B&Bs. So why would you want to pay $49.99 for this one on gardens?

Does it matter? Well, yes it does if I can pick it up within five minutes of starting to look at the book. And saddest of all, was the resigned acceptance I heard from some other garden owners. “It shouldn’t happen, but I guess it does.” Why do we settle for so much less when it comes to garden writing?

The author writes of one garden that it “… stands as a welcome rest from the sometimes anxious quest to make the definitive New Zealand garden, spurning the temptation (italics mine) to realise its European formal outline in native plants and minimising the contrast (or compromise) of English garden style which marries informality with formality.”

That passage is certainly packed with judgements. I have yet to find myself surrounded by angst-ridden gardeners frantically clipping, shaping and pleaching native plants. Cos, like, that’s just such a cliché these days, innit? Can there really ever be such a thing as a definitive New Zealand garden? Many might think that softening the austerity of a stark formal garden is a considerable enhancement, not a compromise. And is the only English style that is to be acknowledged the Arts and Crafts genre? English gardening embraces so much more. How about Capability Brown and landscape gardening on a grand scale? Woodland gardening? Naturalistic gardening?

Of another: “… a garden which showcases the genre with brio. The entranceway… announces the dramatic change of register to full-on subtropicalia.” Subtropicalia? Really? I admit I thought brio was a typo until I googled it – a musical term denoting vibrancy. Or something.

I have been to both these gardens. I wonder if the author has.