We are fairly dedicated viewers of the long-running series BBC Gardener’s World. Of late it has been on free to air Choice TV (interspersed with huge quantities of advertising) and sometimes it turns up on the Living Channel. There was a programme that screened here last November which demonstrated the technique of the Chelsea chop. I tried it in a small way and will be doing a great deal more of it this coming year.

The Chelsea chop came by its name, apparently, because at the end of the annual Chelsea Flower Show, many surplus plants were returned to nurseries. These plants in full growth, nearing or at their peak, were often cut back hard. Presumably some were plants forced into early growth to peak for the show and that early growth can be leggy. Plants responded with greatly increased vigour and put on extended floral displays with much bushier and more compact shapes.

Thus did the term the Chelsea chop enter the lexicon of English gardening.

Right, I thought. Chelsea is towards the end of May which translates to November in our hemisphere. I headed out with the snips to experiment. It seemed extreme because I was cutting off flower stems which were already well advanced. In some cases, I cut half and left half. I can now report that it works and I will be doing a great deal more of it next spring.

Important points to note are that we are talking about perennials here, not shrubs or bulbs. You need to understand your perennials because it only works on varieties which repeat flower. If you snip the ones which only flower once, such as irises or aquilegias, you won’t get any flowers at all.

I tried it on perennial lobelias, sedums, penstemons and asters.

The unchopped lobelias have shot up their flower spikes to over 1.5 metres and they have promptly fallen over in the welcome rain this week. The plants I Chelsea chopped are only a few days behind in their stage of flowering but have tidy, sturdy stems about 50cm high. They are much better in the garden borders. 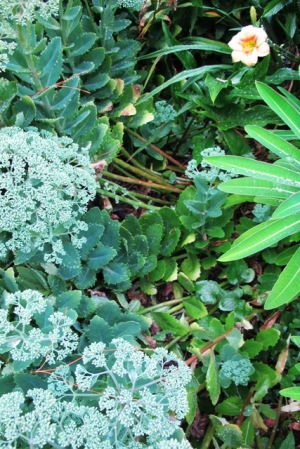 Sedum, left to its own devices and falling apart already

Many readers will understand when I complain about the sedums which grow brilliantly from such tidy rosettes at ground level but when they reach a certain point of being top heavy, they fall apart. The Chelsea chopped ones are a more compact and holding together at this stage.

I cut the asters because I didn’t want them to flower until late summer and they were threatening to do it too early. They are just opening now, on lovely bushy mounds of plant, and should take us into autumn.

I see the Telegraph website advice is to do it with Campanula lactiflora (which can get a bit too tall and fall over if you don’t stake it), rudbeckias, echinaceas and heleniums as well. Their writer advises to prune back by a third. Essentially it is a more extreme version of pinching out plants at their early stages to encourage bushier growth.

Perennial gardening is our current learning project here. We have been working on it for a few years now and the more we learn, the more we realise there is to learn. New Zealanders don’t have a great record in perennial or herbaceous gardening. We lean more to bunging them all in together in mixed borders, or working from a very limited palette in large swathes of the same plant.

Sedum, cut back last November and holding itself well. Flowering is unaffected

The mix and match approach to perennials is very English. They just do it so much better than anywhere else we have seen. Underpinning it (at its best) is a wealth of experience in successional flowering and good combinations. It is not just flower colour combinations, it is also compatible growth habits. This may be growing a naturally leggy plant (such as Campanula lactiflora) through a plant that is sturdy enough to support its leaning companion. It is making sure that a big voluptuous plant can’t flop all over a low growing, more retiring specimen. It is getting variations within the foliage as well as the flowers. It is getting the plant shapes right.

And it is not just peak flowering looking its best for three weeks of the year. It is understanding which combinations will take the garden through the season from spring to autumn, so as one finishes, another star takes centre stage. Judicious use of the Chelsea chop can extend the display, staggering flowering through the season.

There is a lot to it. No wonder people opt for mass plantings of the same plant. It is much easier. So too with the cottage garden which does not require the same level of skill. This type of intensive gardening is not to everybody’s taste but we are finding it interesting to learn. To be honest, I had not appreciated the skill that goes into putting in a really good planting of herbaceous material.

I will be doing my best impersonation of a garden hairdresser come this November. I will be out there snip, snip, snippin’ away.