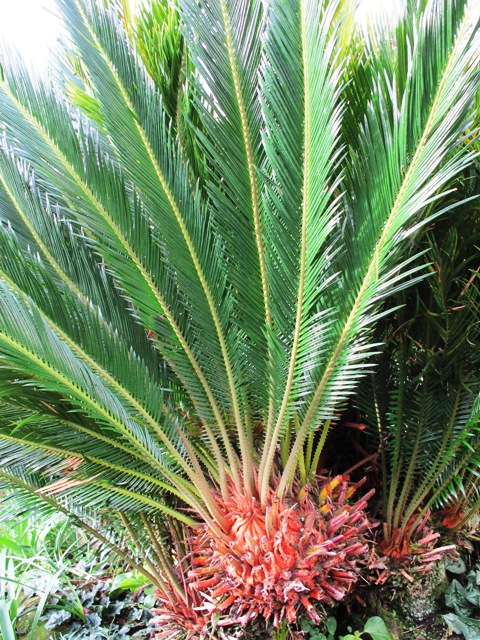 It is often referred to as the Japanese sago palm. It is from Japan but it is definitely not a palm. Cycads are different to palms with only a distant botanical connection. Apparently you can extract edible starch to make sago but the plant is so very slow growing that I am sure there are more sustainable and easier food sources should you feel the need for sago in your diet.

There is nothing rare about C. revoluta. It is probably the most widely available variety on the international market, often sold as a house plant. After several decades – five or six – ours is quite large but these are slow growing plants which are generally undemanding. As a house plant, it will want good light levels. In the garden it is one of the hardier cycads, not turning a hair at several degrees of frost but it needs a well drained situation. Ours is in the rockery, too close to a narrow path so I am forever clipping back its very stiff leaves to allow passage. It develops oversized football-like offshoots which can be grown as new plants. Over time a trunk develops – up to 6m, apparently. As the trunk of ours is sitting around 20cm at this point, it won’t be in my time. It has been taller but rotted out some years ago, re-growing from the base.

Like all cycads, C.revoluta is dioecious. Both male and female plants are needed to set seed. This is probably a good thing given that the seeds are toxic and can kill dogs.