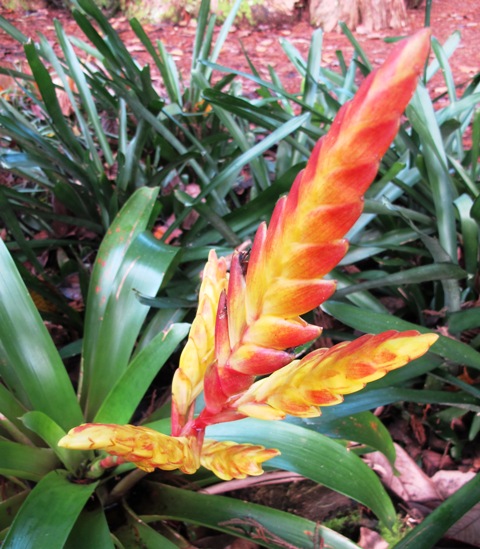 A vriesea, but we are not sure which one

In the depths of winter, most of the bromeliads come into flower – an exotic counterpoint to wintery gloom. Bromeliads are a surprisingly diverse plant family. The best known brom is the pineapple but fewer realise that tillandsia or Spanish moss is also a member. The vast majority come from the warmer climes of Central America. This one is a vriesea. It will be a named cultivar but we lost the labels in the mists of time. Unlike many in the family, it is not prickly. Its foliage is just an anonymous looking green rosette, really, which holds water and also traps an abundance of falling leaves and debris. Then it puts up this flower which lasts for many weeks, stretching into a couple of months. The bloom is like a flat wax cast, almost two dimensional and of such heavy substance that it is unaffected by the weather.

Like many bromeliads, the vriesea is epiphytic and generally self sustaining. It draws all the sustenance it needs from the air and rain and will grow perched in the fork of a tree or on an old stump. This one is in the ground but it will never develop much of a root system.

We grow most of our bromeliads in protected woodland conditions with high shade from evergreen trees. It can get cold for them, but they never get any frost. We go through and pluck out debris and remove dead leaves from time to time and in return, they are totally undemanding and surprise us with the most wonderfully exotic blooms.