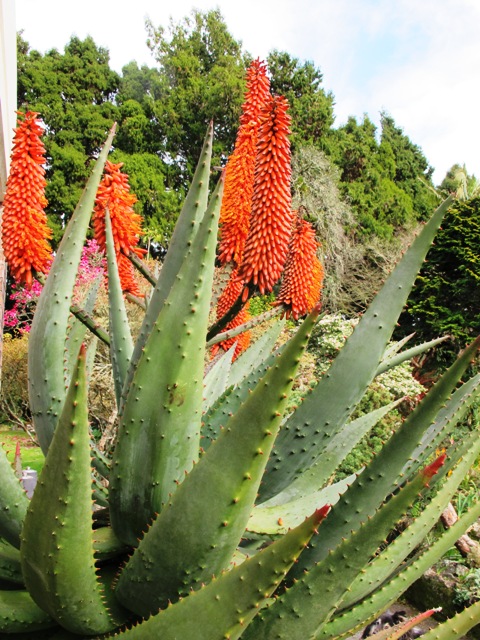 The waxeyes are delighted by the flowering of this aloe and the vertical flower spikes are often populated by at least half a dozen of these cheerful souls. This is a particularly spiky aloe, coming, as many do, from the coastal areas of South Africa. As such, it prefers a dry climate, warm temperatures and sandy soils. None of these apply here, so presumably it is fairly forgiving but it will rot out without excellent drainage. It is a very heavy plant on top so what is happening below ground is important. Wikipedia tells me that each fleshy leaf can weigh up to 2kg when it is harvested. And why is it harvested? It is not just the better known Aloe vera (or ‘ello, ‘ello, ‘ello Vera as we refer to it here) that has useful attributes. A. ferox also has medicinal and cosmetic properties and is a commercial crop. With its fiercely spiky leaves, you would want to be wearing leather gloves at harvest time.

There is nothing rare about A. ferox, except in the wild where it is endangered. It is widely available in the marketplace. In optimum conditions, plants can reach 3m tall, but after many years ours still sits at half that height. We may have problems if it reaches its potential.

Aloes are a very large family of flowering succulents from the African continent. Many are winter flowering, presumably triggered by seasonal rains.