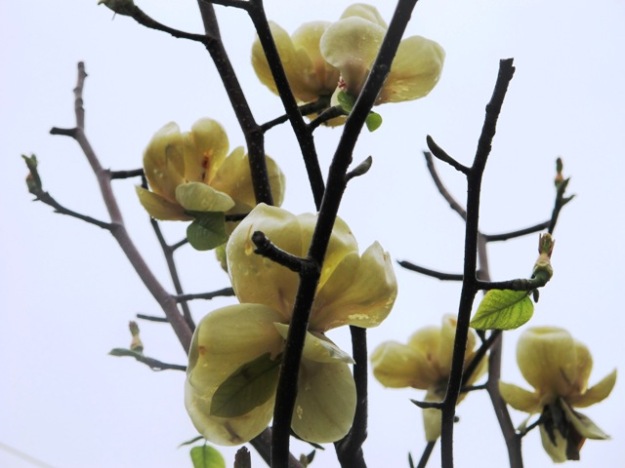 There is some relief here this week as our newest magnolia, Honey Tulip, is looking particularly good. It is always a bit nerve wracking releasing a new cultivar on the market and hoping we have it right.

We are still a little bemused by a communication from some random person when Honey Tulip was first shown in an overseas publication. I will have to paraphrase it because I must have deleted it in irritation at the time, but it said something along the lines of: “It is good that Mark Jury is discerning in the magnolias he names, but the world has enough yellow magnolias already….” It then proceeded to instruct my Mark on what he should be breeding for instead.

The international world of magnolias is pretty small, the number of international magnolia breeders even fewer. We know most of them by repute, if not personally. This email did not come from anyone we had heard of before. What was galling was that in the heady world of new magnolias, Honey Tulip represents a genuine step in flower form for the yellows. 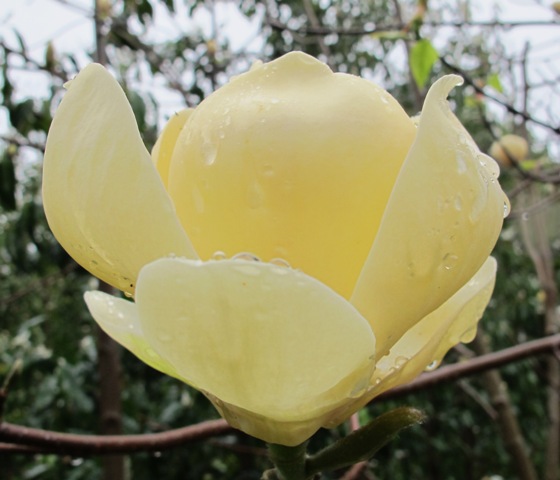 Honey Tulip – a lucky break in flower form and performance

The yellow magnolias descend from a single species and while most magnolias originate from parts of Asia, the yellow deciduous M. acuminata and the evergreen grandiflora magnolias are from USA. M. acuminata is from eastern USA up into southern Ontario in Canada. We can remember when it first came into this country maybe 25 years ago, along with four of the earliest yellow hybrids – Yellow Bird, Yellow Fever, Elizabeth and Koban Dori. They were a collector’s novelty. Who knew that magnolia flowers could be yellow?

It did not take that long to realise that the yellow magnolias were not quite like the big pink, red, purple and white ones. There are a few problems yet to be solved. M. acuminata itself grows very rapidly and very large which takes it beyond the size most gardens can accommodate. The flowers are small, very small by magnolia standards, though they have good fragrance. Mind you, it has to be a very strong scent to mean anything when the blooms are 20 metres up above.

However, the biggest problem with acuminata and most of the hybrids is that the flowers come so late in the season that they coincide with the new foliage which then hides them. We are of the opinion that the whole point of a deciduous magnolia is to have all those fat, furry buds exploding into a mass of blooms on a bare tree in late winter and early spring. So little flowers, no matter what colour, obscured by masses of fresh foliage, are not going to set the world on fire.

We have not kept buying the many new yellow hybrids that have come on the market. There is a limit to how much space we have and too many of them show the same flaws. In a large garden, the best performer we have seen so far remains the early American hybrid with the unfortunate name of Yellow Fever. It is not the strongest yellow but it does flower on bare wood and is a pretty primrose, unlike Elizabeth which is more cream.

There is yellow form of the Asian M. denudata but we have not heard of it being imported to this country yet and have not seen it in person. It is difficult to judge colour from the range of hues shown on the internet. A form called ‘Yellow River’ is being sold overseas but the nature of its breeding and origin is unclear. Certainly it came out of China and it has denudata origins but whether it is a yellow sport of that species, a natural hybrid or a controlled cross seems unclear. Even less clear is when or if it will become available in this country. Only time will tell whether international breeders get the jump on different yellow magnolias using denudata yellow, with or without acuminata.

For all these reasons, our Honey Tulip represented a significant breeding step. It flowers on bare wood, before the foliage. It does not appear that it is going to be of timber tree stature. The colour is a pretty butterscotch but the big breakthrough is the form. While not huge flowers, the tulip shaped blooms are larger than most other yellows – very similar in fact to a soft yellow form of Magnolia Black Tulip. It was also a lucky break because it was the only one of the plants from that particular cross that flowered in that form and colour.

The ultimate challenge is to get a pretty yellow Iolanthe with big cup and saucer flowers. Mark has about 20 years left in him to work towards this goal. I wonder then if the overseas critic who saw himself as an expert on yellow magnolias will concede that there is always room for improvement.

The ultimate breeding challenge – is a yellow Iolanthe even possible?

10 thoughts on “The Yellow Magnolias and Honey Tulip”