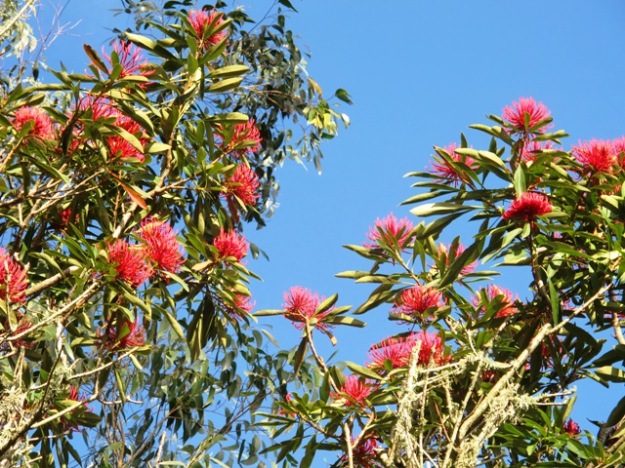 In days when we used to retail plants from here, we would have to keep a straight face when ingénues came in asking what the “lovely red rhododendron at the gate” was. Ahem – commonly known as a waratah, though not to be confused with the fencing waratah. It is the emblem of New South Wales and, like many Australian natives, is not too happy in the fertile, high rainfall conditions of much of this country. It evolved to grow in poorer, harder, drier environments though I see the gardening advice across the ditch is to give these plants semi shade and to water in summer. It has also evolved to survive regular bush fires.

Telopeas are members of the proteaceae family and we struggle growing most of those because of our regular rain all year. They do better in drier, coastal areas. Some years are much better than others for the telopea floral display and this year it may be the dry summer helped. The Australian advice is to cut the plant back very hard after flowering each year. We have never done this and ours tends to undergo a natural die-back process every few years. However, it has still reached the maximum height of 5 metres, owing to the fact that we don’t get bush fires to keep it down. The habit of growth is more shrubby than tree-like and foliage has that Aussie gum tree look. It is apparently a long-lived cut flower. 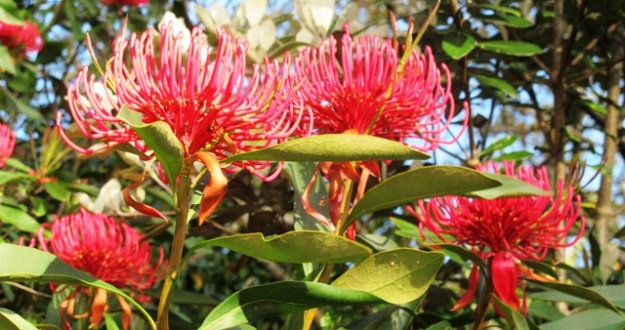