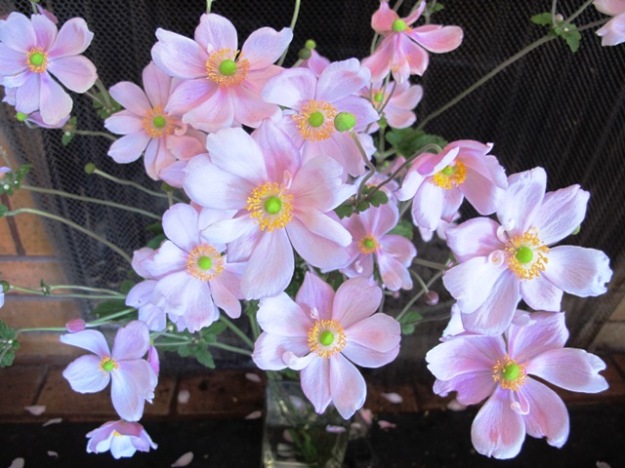 Wind flowers are a personal marker of our wedding anniversary

On the evening before we married, Mark turned up with an armful of Japanese anemones that he had gathered from the Taihape roadside. Don’t even ask why we got married in Taihape when we neither lived there nor came from there. It’s a complicated story. Wind flowers, he called the anemones and believe me, although back in the mists of time, it was a romantic gesture I have never forgotten.

Every year the wind flowers bloom on our wedding anniversary and he often brings some indoors. Last week he followed the old cut flower wisdom – re-cut the stems and burned the ends and they have lasted a full week in water.

We have three different Japanese anemones, in light pink, white and a semi double dark pink which is more compact in growth. It seems that the first two are the straight species, A. hupehensis. Although known throughout the world as Japanese anemones, they are originally Chinese – from the eastern province of Hupeh, in fact. They have been grown so widely in Japan for so long that common parlance attributes them to that country. It is no surprise that the Japanese, with their cultural penchant for simplicity and natural form, took a liking to them. 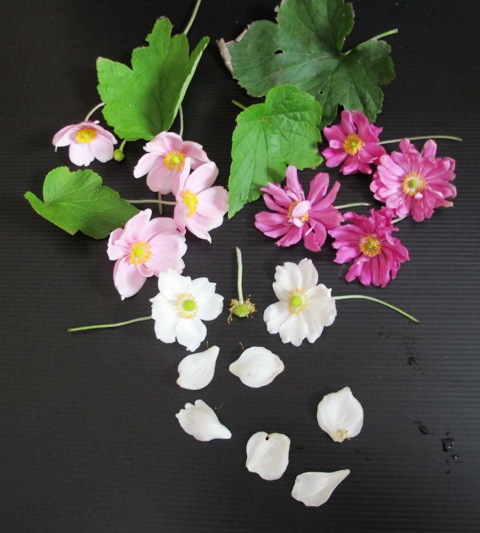 The semi-double darker one will be a hybrid and a named form that was purchased. Mark commented vaguely that he thought it may carry a woman’s name but I see that this plant family is more highly prized overseas than in New Zealand and there are a fair number of named forms, several of them named after women. For the botanically inclined, the Japanese anemones classified as A. hybrida are likely to be mixes of A. hupehenis with A. elegans and A. vitifolia. This is a plant family that crosses readily – though to get a cross you generally need plants that flower around the same time.

Weeds, I hear some readers saying. Weeds. Yes they can be overly vigorous, given the right conditions and become rampant, bordering on invasive because they spread below ground. You probably don’t want to unleash them in areas with plant treasures which they may out-compete. Lovely though they are in flower, you can have too many of them.

That said, I see that there is general agreement that they are not always easy to establish which made me feel better about our meagre showing of white ones in the woodland garden. I had spotted a pretty patch down the road, growing as a roadside wild flower and it is those I photographed. I love the combination of the single, white flowers dancing above the dried grasses. 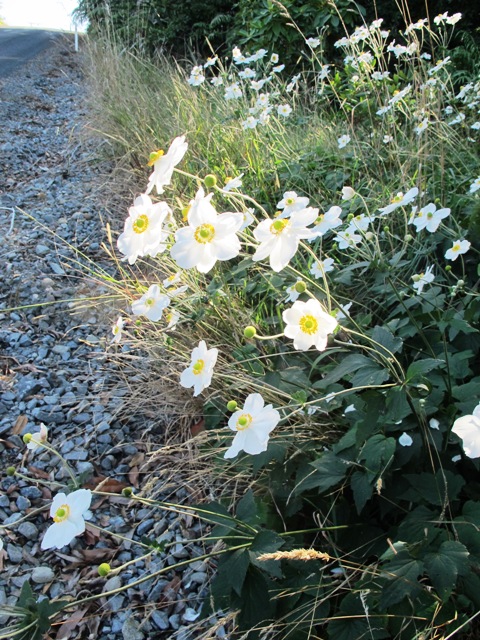 Our pink ones are planted on our roadside and come into flower after the summer colour has largely faded. We have designated our rural road verges no-spray zones with the local council so we carry out our own maintenance. We mow a grassy strip immediately beside the road, get rid of noxious weeds like the dreaded bristle grass and we can do what we like with the rest. And what we like are roadside wild flowers – agapanthus, hydrangeas, robust begonia species, oenothera (evening primrose), belladonnas, crocosmia and the like. It is not just for passing motorists. It is also to feed the bees and to keep some roadside cover in an intensive dairying area which can otherwise resemble a green grass desert.

There are actually somewhere over 120 different anemone species. By far the most common in gardens are A. coronaria. These are the spring flowering corms that you buy as de Caen (the singles, mainly in blue and red but also in pinks and whites) and St Brigid (the doubles). They are very cheerful and cheap to buy. If you get a bulk pack, split it into four and soak one batch at a time overnight before planting. Done at weekly intervals, you can extend the flowering for the first season.

A. blanda is a little Greek species with predominantly blue flowers, more like a carpet if mass planted. A. nemerosa is the European wood anemone. We would like both of these dainty species to naturalise far more widely in our garden than we have achieved so far. They are transient early spring delights.

But in autumn it is time for the wind flowers to star.

First published in the Waikato Times and reprinted here with this permission.