Glastonbury is in the Somerset area of the United Kingdom. The abbey site has had a Christian church on it since the seventh century, but legend takes it back further. One version has Joseph of Arimathea bringing his young nephew, Jesus Christ to Glastonbury where they built the first Christian church at that location. But the Glastonbury thorn tree is attributed to the second visit by Joseph of Arimathea soon after the death of Christ. Reportedly landing in a state of exhaustion, he thrust his staff into the ground on the slope now known as Wearyall Hill. The staff took root overnight and grew into the Glastonbury thorn tree, revered as sacred through the ages since.

Interwoven through the Glastonbury thorn legend, is the more powerful myth of the Holy Grail that Joseph was believed to have brought and buried just beneath the Glastonbury Tor. The Holy Grail of course is the cup used by Christ at the Last Supper and subsequently used by Joseph to catch his blood at the crucifixion. And with the Holy Grail come the legends of King Arthur and the Knights of the Round Table. Glastonbury Abbey is reputedly the final resting place of both Arthur and Guinevere. Sadly, after about 1000 years, they got a bit careless with the remains and when the abbey was sacked and largely destroyed in the 1500s, Arthur and Guinevere’s remains were no more.

But the Glastonbury thorn endured. Not the original tree. It had a bit of a rough history and still has as replacement plants either die, are vandalised or maybe attacked in spiritual fervour. But as the plant does not strike from cutting or grow true from seed, it has to be grafted. And it does appear that the plant has remained true and been distributed for many hundreds of years.

It seems a little mean-spirited to disturb such a wonderful legend with botany. But whatever the truth is about the Holy Grail, it is a fact that that the Glastonbury thorn is simply a variation on Crataegus monogyna that is the common hawthorn of the UK – the fragrant Mayflower. It seems unlikely that Joseph of Arimathea’s wooden staff at the time of his alleged arrival in Britain was fashioned from a plant native to that country. What makes C. monogyna “Biflora” different is that it has two flowerings a year. Its main flowering is in spring but it also puts up a minor second blooming in winter. The tradition of sending a spray of Glastonbury thorn to the monarch at Christmas started back in the time of James 1 at the turn of the sixteenth century and apparently continues today.

These days Glastonbury is probably associated as much with the annual music festival which, despite being timed for the end of June, seems to be a particularly muddy affair. Despite its very early Christian history and even earlier pagan history, or maybe as a result of it, modern Glastonbury apparently now resembles something more akin to Diagon Alley from the Harry Potter stories. 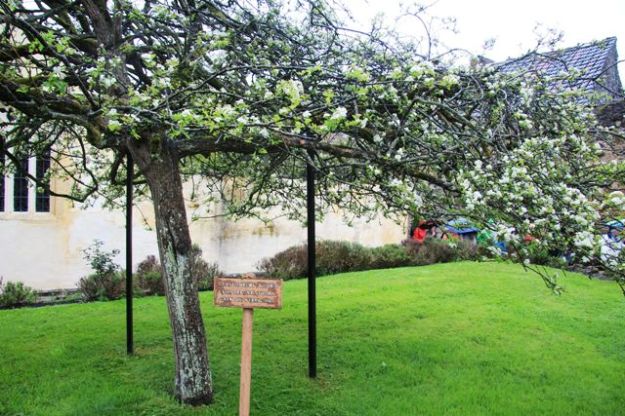 I noticed the wry comments on a BBC New Magazine site from 2012. “The former mayor John Coles tends to the remnants of the thorn. In recent years, people have tied ribbons to it bearing messages, prayers and maybe even spells. Coles removes them. “It takes daylight away from the trunk,” he explains. He also prises out the coins that people have jammed into the bark.”This never used to happen even eight or nine years ago,” he says sadly.The apparent takeover of the town by new age believers disturbs him. “There’s nothing wrong with paganism but there is a certain taste of Satanism as well and I have always regarded Glastonbury as a Christian town.”

Many St Mary’s parishioners in New Plymouth were proud of their Glastonbury thorn until it was revealed that it is Crataegus crus-galli from the eastern states of North America. Apparently it was planted back around 1860 by Archdeacon Govett. This makes it one of the oldest known introduced trees in the province but the Glastonbury thorn it ain’t. This is a bit of a shame as the Cathedral of St Mary is the oldest stone church in New Zealand with its foundation stone having been laid in 1845. It would have been a charming connection back to the Glastonbury Abbey history and legend where the lady chapel is still referred to as ‘Our Lady St. Mary of Glastonbury’. Instead they just have a scrubby but venerable North American species.