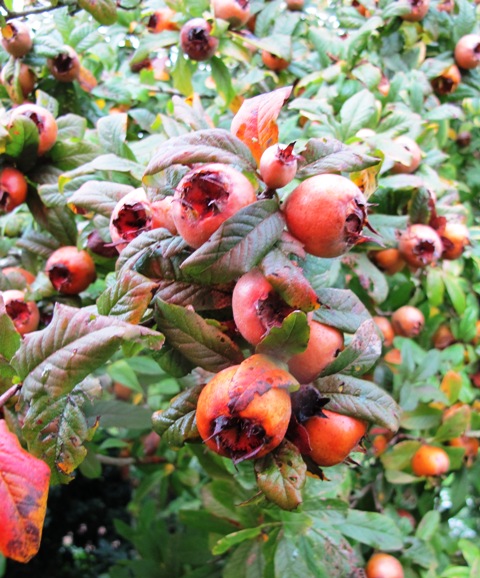 The medlar – probably better as an ornamental than for its harvest

It’s a medlar, and a damn fine specimen at that, which I found in its fruiting glory in the gardens at Wairere Nursery in Gordonton. Medlars are having something of an upsurge in popularity, in the media at least, though they are better seen as a curious ornamental than a fruiting tree for harvest. Medlars were brought to this country by the early settlers but there are good reasons why this fruit tree was quickly superseded by apples and pears. The small fruit are hard, high in tannin and mouth-puckeringly astringent until they are on the cusp of passing from ripe to rotten. Timing is everything, apparently, when it comes to harvesting the medlar crop. In cold climates, when the frosts start, a process called bletting changes the composition of the fruit, making it edible. In milder climates we are never cold enough to allow for bletting so it is a case of waiting until the fruit is soft and the inside flesh has turned brown.

The medlar tree hails from that area of the world where eastern Europe meets western Asia – Turkey, Iran and Bulgaria – and has been cultivated since Roman times. It is a large deciduous shrub, some might say a small, spreading tree and a member of the rosaceae group so a relative of apples, pears and quinces. As with most fruit trees, it will have pretty spring blossom and will even colour in autumn but it is the fruit crop that attracts attention. I wouldn’t bother with it in the orchard but it justifies its place in the ornamental garden.