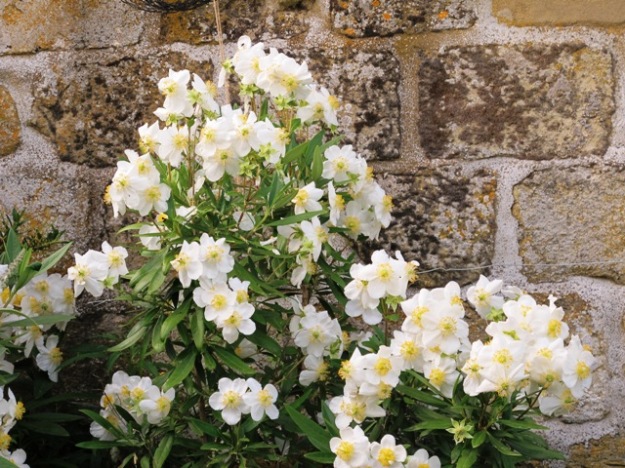 Carpenteria californica – but in Yorkshire, not Tikorangi

This is my photograph but not taken in our garden. We saw a number of carpenterias flowering in English summer gardens, none lovelier than this specimen in Yorkshire. We tried growing it here when Top Trees Nursery near Clive were selling plants in this country. Ours did not thrive and eventually gave up the ghost. It’s failure to thrive will in part have been that it hails from California and is better adapted to a Mediterranean climate – dry summers and cool, dry winters.

There is only one species of carpenteria, which is a large, evergreen shrub. However it is a relative to philadelphus which we do succeed in growing here. In the wild, it occurs in a very limited geographic area and is apparently endangered but it is so widely grown as a garden plant that its survival is guaranteed. Unlike philadelphus, there is no fragrance.

The common name is a tree anemone and those lovely big white blooms with golden stamens are indeed an anemone form.