Meadow gardens sound so very romantic yet are not often seen in this country whereas they are de rigueur in Britain, to the extent that I make jokes that it is clearly the law to have one. But not all meadow gardens are the same by any manner of means. 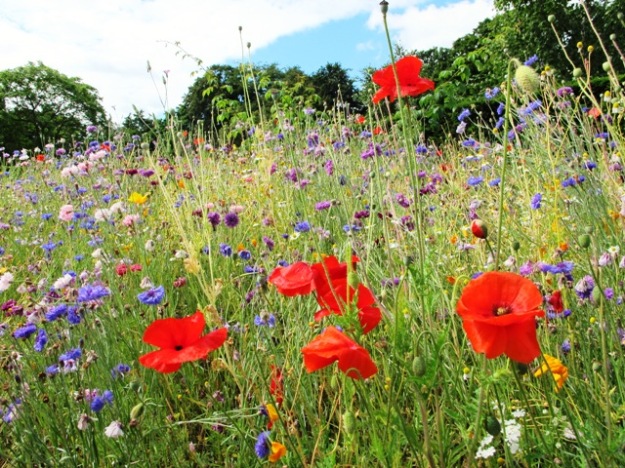 1) The field sown with wildflower mix is probably what is most commonly referred to as a meadow in this country. These of course are not our native wildflowers – far from it – but the reference is usually to the inclusion of varieties closest to the wild species and consequently smaller and simpler blooms than seen in garden hybrids. The problem in our climate is that favourable growing conditions can make for leggy plants that will be flattened by both heavy rain or wind. It was heavy rain that flattened this wildflower mix at Wisley. 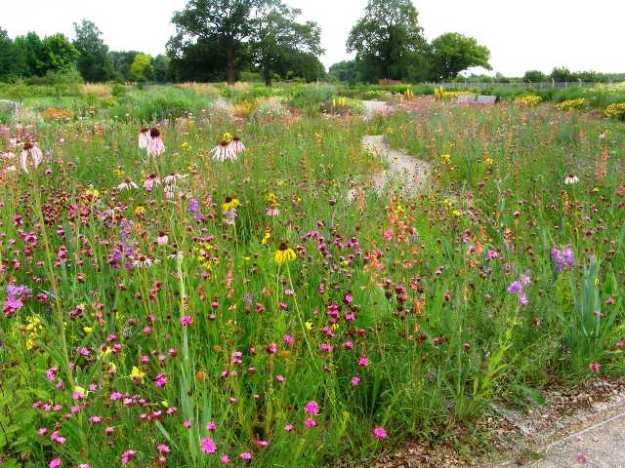 2) We were entranced in 2009 by the new Missouri meadow garden at Wisley, designed by Professor James Hitchmough from the University of Sheffield. This style is now often referred to as being of the Sheffield School of planting design with its focus on ecology and sustainability. Five years later, it has developed into a huge perennial bed and much of the original detail has gone. It is still most attractive and low maintenance but it has lost the meadow feel. I have not seen prairies but I doubt that it is a prairie reinterpretation either.

June 2014 at the Old Vicarage in Norfolk

3) The wildflower meadow at the Old Vicarage Garden in Norfolk was delightful in its flowering simplicity in 2009. This is it at the same time of the year in 2014 although the flowering appeared to be delayed this year. The yellow corn marigold and grasses have swamped out most other plants. The owner told us he keeps trying to get the corn poppies re-established but without great success. Meadows evolve over time. To constantly spray off and resow in flowers, as sometimes recommended in New Zealand, does not give you a meadow. It gives you a garden of annuals. 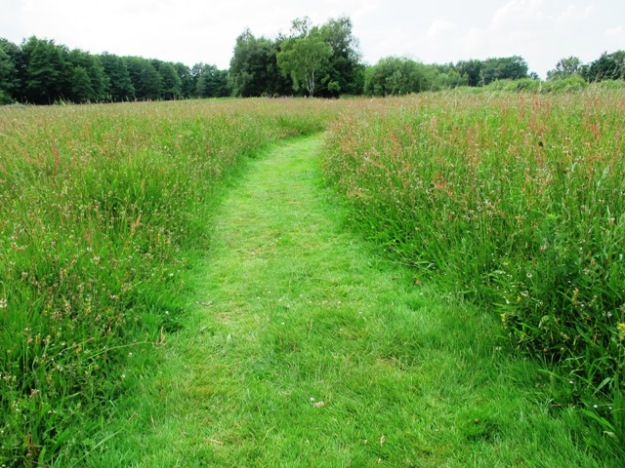 Pensthorpe in the north of Norfolk

4) Maximum ecological brownie points are earned by those who have the patience to allow a natural meadow to develop with no over-sowing or management of plant content. What is present has arrived naturally and is allowed to stay. No sprays are used and no stock grazes the area. However, most meadows will be cut sometime in late August, left to lie for two weeks to allow seed to fall out and then the hay raked off, to prevent a build up of fertility.

Pettifers Garden near Stratford on Avon

5) Dry grass has charm. This is a bulb meadow being allowed to dry off naturally – quite possibly bluebells, daffodils and snowdrops in spring. Those are allium seed heads showing which are just passing over, heading into early summer. In our more fertile conditions with higher rainfall, we are more likely to get less attractive rank, wet, green growth heavily infested with what we call weeds. Maybe it is time to reconsider our classification and attitude to many such weeds.

6) Yellow rattle (Rhinanthus minor) is an integral part of English meadows. It is a parasitic plant that weakens grass growth and allows other plants to establish with reduced competition, increasing the diversity. Obviously we do not need this plant to escape into our farming pastures and I do not even know if it is in New Zealand. We have seen something similar growing wild on our road verge and will be having a closer look this summer. We think it may be a broomrape rather than a Rhinanthus.

11 thoughts on “The Meadow”