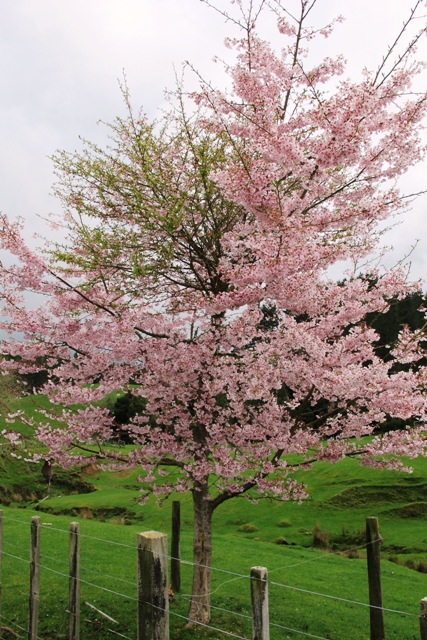 I came across this fine example of witches’ broom in a roadside tree planting of Prunus Awanui. That particular flowering cherry is known to be vulnerable to witches’ broom. It is the green section coming into dense leaf earlier than the rest of the tree and without flowers. Left to its own devices, over time the witches’ broom will take over the tree and you will no longer see much in the way of spring flowering. If you leave it for a few seasons, it also becomes harder to remove the affected sections without destroying the shape and structure of the tree.

Basically, witches’ broom is a mutation within the tree – possibly similar to an immune disorder in humans – which causes dense, twiggy growth in that section. It does not appear to heal itself and it does not grow out of it the following year. There are multiple causes but no general treatment beyond surgery – removal of all affected parts of the plant. Cherry trees are particularly prone to it, although you won’t find them in the campanulatas or Taiwanese cherries. Generally it is seen in the Japanese cherries and the hybrids. If you spot it now, mark it because it is harder to identify later in the summer when all the branches are in leaf. Spray on paint is handy for this, or a tie. Pruning cherry trees in high summer is recommended to reduce disease getting in.

On the bright side, witches’ broom mutations are what have given us many of the dwarf conifers so they are not all bad.