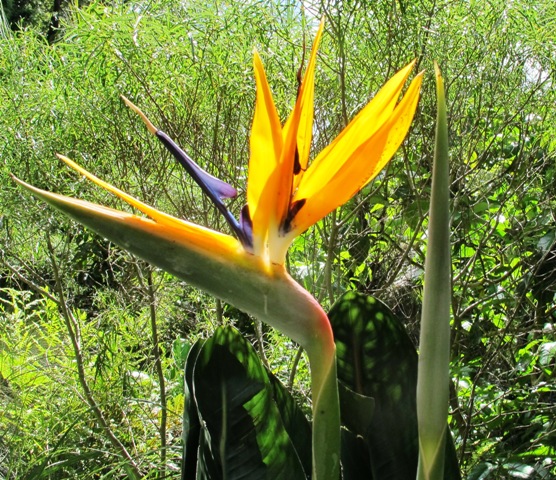 Strelitzia reginae or the bird of paradise

Is there anything more exotic, more tropical in appearance than the bird of paradise plant? In fact it is native to South Africa which is not the usual “Tropics”, though it is now grown widely throughout the temperate and tropical world and is not as fussy as one might think. In its homeland, it is commonly called the craneflower because of the resemblance to cranes – which are heron-like birds.

It is a very curious bloom, almost two dimensional. The actual petals are the blue centre to the flower and it is this that holds the pollen and the nectar which is what attracts the birds to achieve pollination. The leaves are like paddles with very long stems (technically called petioles) and are heavy textured.

There are about 5 different species of strelitzia but this is by far the most common and therefore probably the most adaptable variety. It is never going to like heavy frosts and wants some warmth but is not too fussy. Looking at photographs, I think it must flower more profusely in hotter, drier climates but it is a pretty low fuss perennial in coastal areas of the North Island and some protection from frost will extend its range inland. For us it reaches about 120cm in height. Mark tells me he has the giant Strelitzia nicolai waiting to be planted out. That apparently reaches closer to 10 metres. If it only flowers on top, we will be wanting to plant it down a slope somewhere if we are to see the blooms.