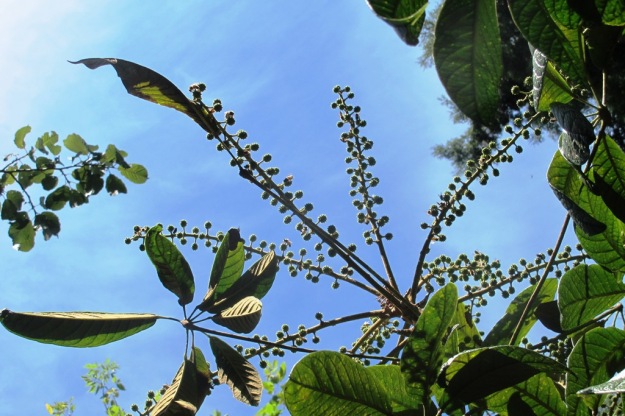 Without the discipline of a weekly newspaper deadline, it is frankly alarming how quickly I find myself slipping out of the pattern of regular writing. I realise how focussed I was all the time on ideas and images to share, always thinking ahead. But I shall show discipline and application, dear Reader, because otherwise my ideas of writing a book will fade forever into pipe dream territory.

I shall set myself an easy task, I thought, and just rattle off a Plant Collector on Schefflera septulosa for starters. But a quick check shows that I had already done that three years ago. It is the story of my life as the years of writing rack up. What caught my eyes and ears this week was to walk beneath a plant of the aforementioned schefflera and to hear the hum of hundreds of busy honey bees. The flowers are not spectacular and I must admit that, not being the world’s most observant person, I had not noticed them before. As we do not have any beehives around us, we are delighted to see such large populations of bees in residence. It is a sign that we are managing a good ecosystem for them. 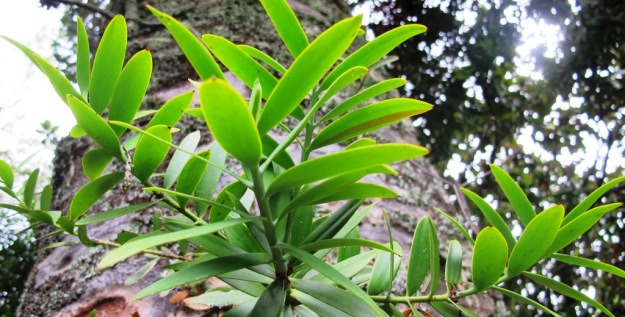 Foliage on our own kauri tree

The felling of mature native trees in urban locations, done in the name of “modern progress” and “economic gain” is big news at the moment. Sustained protests in Auckland have seen the Western Springs pohutukawa (6 large trees) saved from the motorway widening exercise and a reprieve for a mature kauri due to be felled to make way for an outside deck on a new house in the bush-clad suburb of Titirangi. The age of the kauri was declared at 500 years and immediately challenged by those who think any environmental protest undermines economic wealth. Honestly, it becomes academic as to whether it is 200 or 500 years old, but for somebody to describe it as being a “newbie” is just ignorant. It is a significant surviving tree in a rare remnant of forest which pre-dates European settlement. I cannot think that other developed countries – particularly the UK – would countenance a developer cutting down such notable trees. 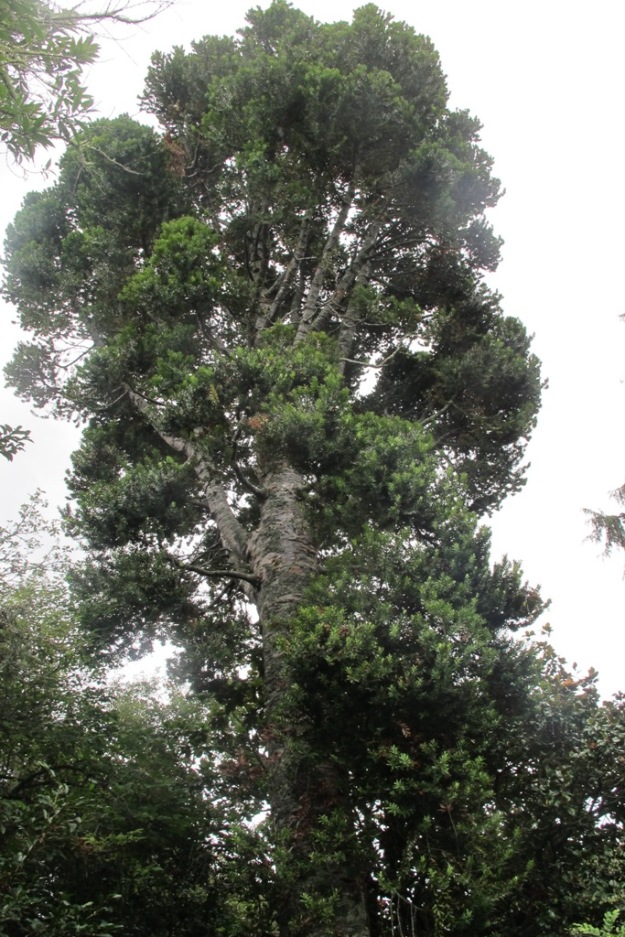 Our own kauri is but a young tree at 65 years

I headed down to photograph our kauri in our park. It is a juvenile at a mere 65 years old but has achieved a remarkable stature in that time because it was planted in prime conditions without competition from other plants. It would be nice to think that it may survive many generations into the future. The botanical name is Agathis australis but it is usual in New Zealand to refer to these by their Maori name of kauri. 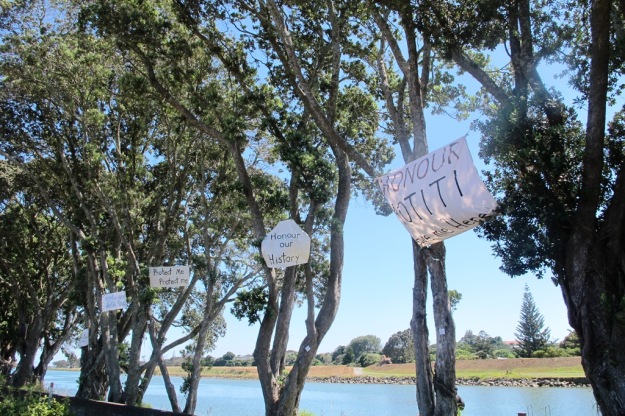 In the meantime, our own battle to save 23 mature pohutukawa on the river bank in our local town continues. The local authorities are less receptive and responsive than in Auckland. Indeed, the Auckland pohutukawa team sent down their banners, bunting and yarn bombing for us to use on our Waitara 23. They survived many weeks in Auckland without mishap but a mere 24 hours in Waitara before the engineer contracted to the Regional Council saw fit to rip them down, damaging many in the process. So much for the right to peaceful, democratic protest in Taranaki. The tattered and damaged “regalia” was eventually returned and will be hung again today as a reminder to the council that this issue is not going to die a quiet death.

If you feel like adding your voice, to tell the Taranaki Regional Council that felling mature native trees is not just a local issue and that people beyond are watching, please visit our on-line email campaign and add your voice. Numbers matter and your support will be much appreciated. 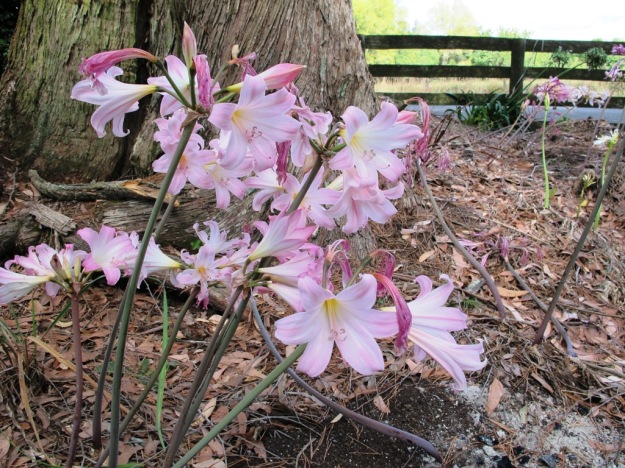 We are inching gently into autumn and the under-rated belladonnas are in bloom. I am looking at these with new respect and thinking that they may warrant bringing in from the roadside to some of the areas of naturalistic garden. I dislike the descriptor “naturalistic gardening”, which seems clumsy to my eyes, but it is more accurate than “wild gardening” which may suggest weedy chaos to some. 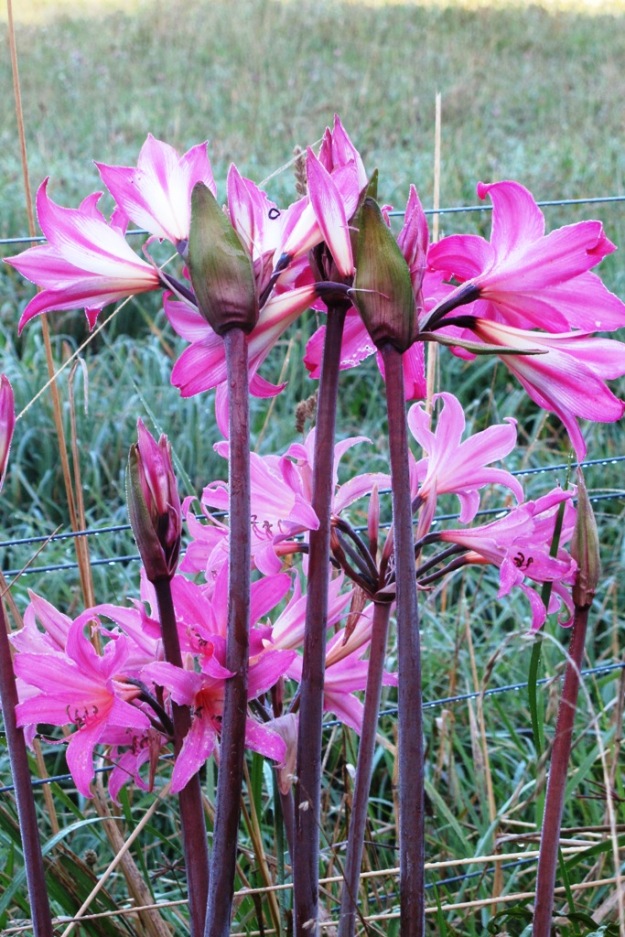 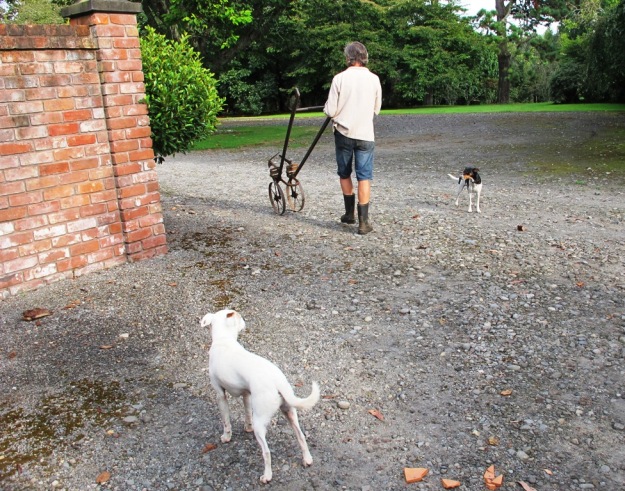 And finally, I leave you with Man, Planet Junior and Dogs this quiet Sunday morning – Mark heading over to his vegetable patch with a treasured implement from times past which he still uses on a regular basis.