My final article when I wrote for the Waikato Times was on washing lines.  Before the axe fell upon my contributions (replaced, I was, by syndicated copy which is “generic” in  nature, shall I say?), I always intended to follow up at some stage with a piece on that other awkward feature of so many New Zealand gardens – the children’s trampoline. What to do with this cumbersome eyesore?

Honestly, I do not believe there is a great deal you can do besides grin and bear it. The attempts I have seen to camouflage trampolines (or tramps, as we call them) have been doomed to failure. The bottom line is that if you want your children to use this large and relatively expensive piece of equipment, it needs to be in prime position – full sun, flat land, alongside your main living area where all the action is happening. In the other words, right in the heart of your outdoor space where it will look irredeemably ugly but it should at least deliver the squeals of happy, active children.

Attempting to hide the trampoline in a more aesthetically pleasing manner is more likely to ensure that it won’t be used much. The spiky stumps on the hard trimmed hedge to the left looked downright dangerous to me.

Try and screen it – and I have seen this done – and you immediately create shade issues and banish the children from the centre of family activity. They will not use it anywhere near as much and you may well wonder why you bother having it.

Somebody once told me that it was easy to dig a huge pit in the lawn and set the tramp level to the ground. Yeah right. In many soils the water will not drain away and you develop a festering swamp of mosquito larvae below. It is nowhere near as much fun for the children and when you get rid of the tramp, you have a great big pit that needs filling. 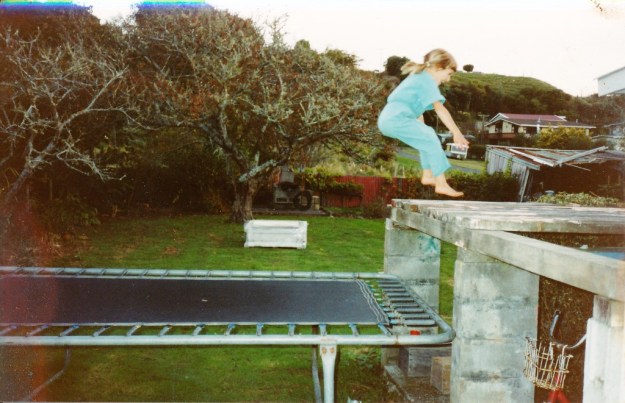 The disused water tank stand which made the tramp twice the fun. I see from the date that our daughter was only 6 at this time. By modern standards, we clearly allowed our children to take physical risks.

We had a very large tramp for our children, large enough to accommodate three smallish people and their rioting and tumbling father. It was large enough, even, for two teenagers. True, it required a stool to climb up to it and it was of the traditional design shunned today as unsafe. It lacked both a mesh cage and covers for its springs. What is more, we discovered by chance that when located by an adjacent platform, the fun increased exponentially. The disused stand for the water tanks was the first platform. When we dismantled this, we built a custom platform from which the kids could jump up and down. It gave both a rest area and a launch pad. More cautious parents may shudder, but in the decade or more that we had the trampoline, there were no serious injuries and I can’t recall minor ones either. The tramp received a huge amount of use. It was a problem when it came to tipping on its side to mow the lawn. It took up a lot of space. When the kids stopped using it (our youngest was well into his teens), it was with great relief that I sold it. Should grandchildren enter our lives, I will not be getting a tramp for them at our place. Their parents can endure it at their own home.

Essentially, children’s play equipment is incompatible with the beautiful designer garden look. I have never seen them combined well. I am philosophical. Once the children have grown, there is plenty of time to achieve the designer look. And the modern safety design of the trampoline makes it more the plaything of younger children so the useful life span of it is halved.

As a postscript, if you have a swimming pool and think that relocating the tramp to that play area seems sensible, it is illegal in this country. Not only must swimming pools be fenced to code, no additional activity such as the barbecue, washing line or children’s play area is permitted inside that fence.

A friend has responded through Facebook with two links to creative ideas on reusing your old trampoline. The first is for hanging beds which look really stylish but will take a great deal of effort. These would never have worked for our super-sized rectangular trampoline but there is a whole section of the internet on repurposing trampoline parts, including some interesting constructions for keeping chickens. In case you wish to. If my memory serves me right, we bought our trampoline for $250 and sold it again, maybe 12 years later, for $180. That is the easier option.

Oh, and should you live in a tornado prone area, trampolines have a large wind sale area and become airborne. While hardly the equivalent of USA’s tornado alley, we can get small twisters here and I have seen a trampoline suspended maybe 10 metres up a pine tree. I have no idea how the owners ever got it back down.