Gone. The view from the lookout on Manukorihi Hill.

Regular readers will know of our battle to save the pohutukawa trees that line our local river. We lost. Today the chainsaws moved in. In a couple of short hours, trees that were over sixty years old were felled to the ground.

Clearly there was some concern about the possibility of protests. Ironically the body that was hellbent on felling these trees is also the body charged with protecting the environment – that is what we call a Tui billboard moment in New Zealand vernacular. In a case of overkill, Taranaki Regional Council marshalled their staff to patrol the entrances to the area. Why, there was even a boat patrolling the river access. They would have been very cold out there on the river for a few hours. Truly, it is mid-winter here and most of us feel a little too old to scale large trees in order to protect them, so the fear of the operation being disrupted by protest was unfounded.

But oh, how sad to see the needless desecration of handsome, well established trees. Despite their public relations spin, the Taranaki Regional Council didn’t consult widely. They preferred to talk to people who said what they wanted to hear. As the protesting voices grew, rather than taking another look at the plans and seeing whether saving the trees could be accommodated, they set about discrediting, denying and deriding the opposing voices.

How anybody in their right mind could think that the hostile expanse of concrete flood wall, topped with barbed wire (it is doing double duty as a security wall for the meat packing works behind) was an appropriate form of town flood protection in this day and age is beyond comprehension. It looks like a prison wall. This is the face of Waitara in 2015. We regard it as simply shameful action by Taranaki Regional Council. 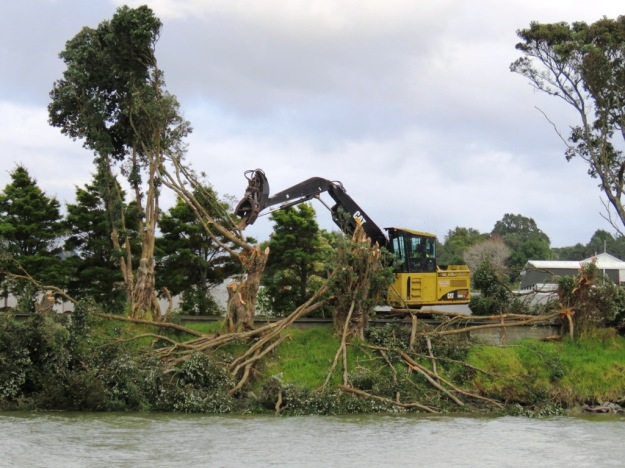 While the chainsaws worked at one end of the row, the digger driver proved that you don’t need chainsaws at the other end – the might of the machine means you can break apart the trees. There was no sign that the men on the site felt any sorrow at the unceremonious felling.

Once were trees. The new view from our town bridge

With ever increasing population in urban areas, we had thought that the role of protecting mature and handsome trees fell increasingly upon our local bodies, particularly in public spaces. These trees had the potential to live for many hundreds of years without causing any harm or inconvenience to residents while enhancing the centre of Waitara. No more.

Will this pretty scene downstream be allowed to remain?

Earlier plans were to fell ALL the riverbank trees. There is fear that this might yet happen. I found this pretty scene just down the river a little further. I wonder if it, too, will suffer the same treatment in the next year or two because the engineer who designed the flood protection doesn’t think there is any place for trees on river banks. 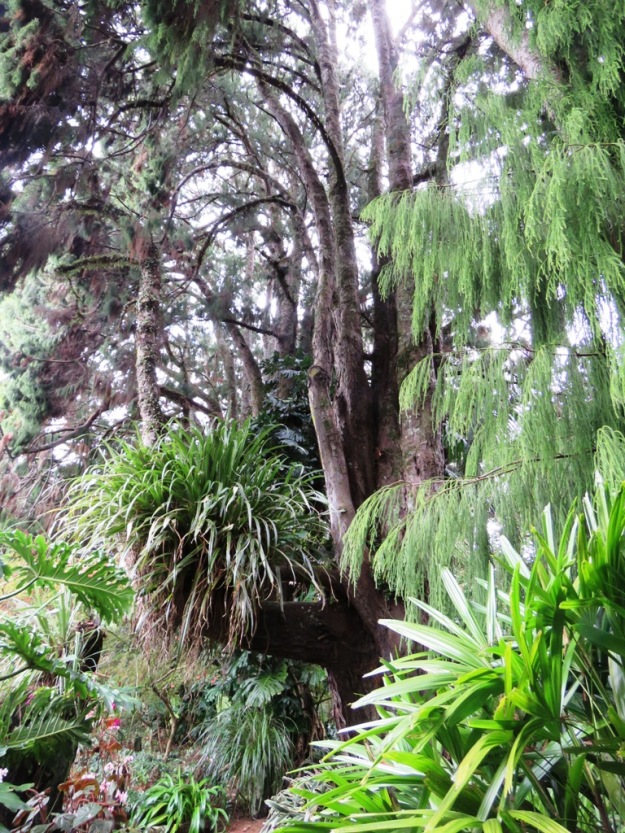 Fortunately, I do not live in the town itself so I could come home to our own place with its many, very large trees to soothe my heavy heart. These at least are beyond the reach of the chainsaw-happy regional council.